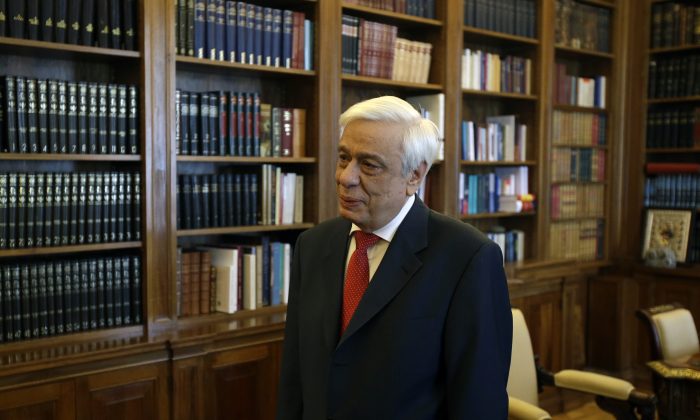 Greece's President Prokopis Pavlopoulos waits for former Prime Minister and head of the main opposition New Democracy party, Antonis Samaras at Presidential Palace in Athens, Sunday, June 28, 2015. Greece is anxiously awaiting a decision by the European Central Bank on whether to increase the emergency liquidity assistance banks can draw on from the country's central bank. (AP Photo/Thanassis Stavrakis)
Europe

The Latest: Germany Warns Travelers to Greece to Bring Cash

Germany’s Foreign Ministry is advising travelers to Greece to ensure they have enough cash on them before they depart.

An updated version of the ministry’s travel advice issued Sunday noted that people seeking to withdraw cash in Greece could face “significant waits” and possible shortages at cash machines.

Worried Greeks were lining up at ATM machines on Sunday, the day after the Prime Minister Alexis Tsipras called for a referendum on creditors’ financial proposals in return for rescue loans and creditors refused to extend Greece’s international bailout beyond Tuesday.

While some machines in Greece were running out of cash, others were being replenished. Another top Greek financial official urged Greeks on Sunday to remain calm and not withdraw all their savings.

It has been allowing Greek banks to draw emergency credit from Greece’s central bank, a financial lifeline that has been keeping Greece’s four major banks going during the country’s tense bailout negotiations with creditors. The ECB has been slowly increasing the emergency credit to compensate for the increase in withdrawals from Greek banks.

But the ECB has said it can only continue such assistance if the banks are basically solvent. A failure by Greece’s government to get more aid before its bailout ends Tuesday and a big payment to the International Monetary Fund is due could prompt the ECB to decide the Greek banks are not financially solid any more.

Capping the aid would quickly force Greek banks to limit withdrawals — but such controls could take Greece a step closer to leaving the 19-nation eurozone.

ECB President Mario Draghi has said it’s up to elected officials to decide Greece’s fate. Analysts say the central bank wants to give politicians every chance to negotiate a deal.

Two opinion polls indicate most Greeks want to keep using the shared euro currency and would prefer a deal with Greece’s European partners rather than a rupture.

The polls published Sunday were both conducted before Prime Minister Alexis Tsipras declared early Saturday that he was calling a referendum on financial proposals made by Greece’s creditors in return for continuing to fund the country with bailout loans. Still, they provide an indication of public sentiment.

In the poll by Alco for the Proto Thema Sunday paper, 57 percent said they believed Greece should make a deal with its EU partners while 29 percent wanted a rupture. A separate poll by Kapa Research for the To Vima newspaper found 47.2 percent of respondents would vote in favor of a new, painful agreement with Greece’s creditors, compared to 33 percent who would vote no and 18.4 percent undecided.

Both nationwide polls were conducted from June 24-26. The Alco poll had a margin of error of 3.1 percent while Kapa Research’s was 3.09 percent.

The ECB was expected to meet Sunday to decide what action to take about Greece. The central is bank is under pressure to end that emergency assistance.

A decision by Prime Minister Alexis Tsipras to call for a national referendum on creditor demands in exchange for bailout loans has thrown Greece’s negotiations with its international lenders into turmoil. In response, other nations in the 19-nation eurozone are refusing to extend Greece’s bailout program beyond its Tuesday expiration date.

Alternate Greek Finance Minister Nadia Valavani told private Mega television on Sunday “we are expecting the funding of Greek banks to continue normally via the ELA after Tuesday.”

Worried Greeks have formed lines at ATM machines all weekend and some machines were running out of cash Sunday morning.

Valavani said the country’s banks could see “business as usual” next week if they receive the emergency support “so long as there is calm” and Greeks don’t attempt to withdraw all their savings.