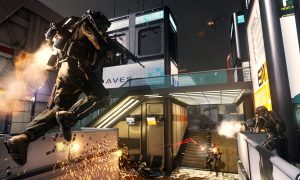 Next week, one of the most popular video game franchises of the past decade will return with its latest entry, Call of Duty: Advanced Warfare
By Jacob Siegal
FONT BFONT SText size
Print

Next week, one of the most popular video game franchises of the past decade will return with its latest entry, Call of Duty: Advanced Warfare.

It’s fair to say that the buzz has died down slightly from the record-breaking days of Modern Warfare 3 and Black Ops 2, but Activision has a great deal of faith in Sledgehammer Games, the recently minted developer which has yet to release a full game.

Call of Duty: Ghosts didn’t do much to push the series forward. Based on what we’ve seen prerelease, Advanced Warfare will, for better or for worse. The exoskeleton suit adds a new dimension to maneuverability and gunplay, giving a new audience the opportunity to learn the systems alongside series regulars.

This is also an untested studio with something to prove, which could factor heavily into the amount of content packed within.

We can speculate all weekend long, but on November 3rd, anyone who purchased a Day Zero edition of the game will be able to start playing and we’ll be able to decide for ourselves.

In the meantime, Activision has released a live-action trailer for Advanced Warfare featuring celebrities Taylor Kitsch and Emily Ratajkowski, and directed by Peter Berg. More than a few of the explosions from Berg’s Battleship movie might have made their way over as well.