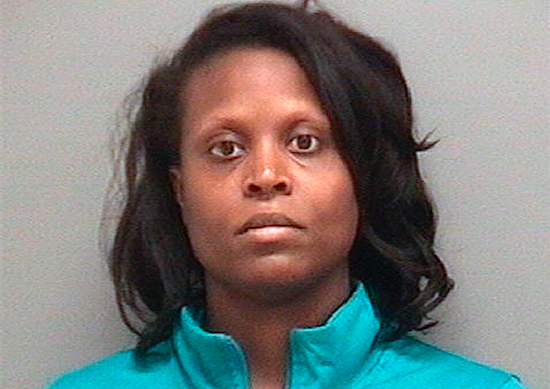 This photo provided by the Wake County (N.C.) Jail shows Taiwo Sobamowo. Police say Sobamowo, in charge of Bobbi Kristina Brown's care at the hospice where she died, was impersonating a nurse and faces charges that include identity fraud and nursing without a license. A Duluth police report obtained Tuesday, Nov. 3, 2015, by The Associated Press states that detectives have documents showing Sobamowo cared for Brown at Peachtree Christian Hospice outside Atlanta. (Wake County (N.C.) Jail via AP)
Entertainment

ATLANTA—The latest on the woman accused of posing as a nurse at the hospice where Bobbi Kristina Brown died (all times local):

An official with a metro Atlanta police department says a woman accused of posing as a nurse at the hospice where Bobbi Kristina Brown died could face additional charges.

Officer Lisa Holland of the Roswell Police Department says Taiwo Sobamowo could face charges of identity fraud and forgery. Holland says a Roswell detective began looking into the issues recently after being contacted by the Forsyth County Sheriff’s Office.

The company that Sobamowo worked for, Homestead Hospice, is based in Roswell.

Homestead Hospice’s CEO said in a statement on Tuesday that the company performed a background check and reviewed references from prior employers. Mallie Sharafat said the company notified authorities when an employee discovered the “credentialing discrepancy.”

Sheriff’s officials in a Georgia county say a woman accused of posing as a nurse at the hospice where Bobbi Kristina Brown died has been transferred from a North Carolina detention center to a Georgia jail.

Rodriguez said she was being held on three charges in his county: financial identity fraud and forgery, both felonies; and a misdemeanor count of practicing as a nurse without a license.

There was no immediate information on when she will face a judge.

(This corrects that Sobamowo was arrested Sunday, not Monday.)

Police say they want to hear from other patients at the metro Atlanta hospice who might have had contact with the woman accused of posing as a nurse while caring for Bobbi Kristina Brown.

Duluth police Capt. Mark Hunter said Wednesday that investigators want to talk to people who had loved ones or friends who were under the care of Taiwo Sobamowo. Police said Sobamowo impersonated a licensed nurse with a similar name and faces charges.

A police report says Sobamowo was in charge of caring for the 22-year-old daughter of singers Bobby Brown and the late Whitney Houston at Peachtree Christian Hospice in Duluth.

Bobbi Kristina Brown died at the hospice July 26, six months after she was found face-down and unresponsive in the bathtub of her townhome.