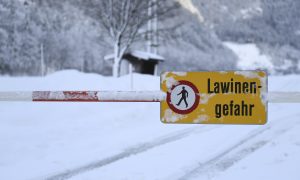 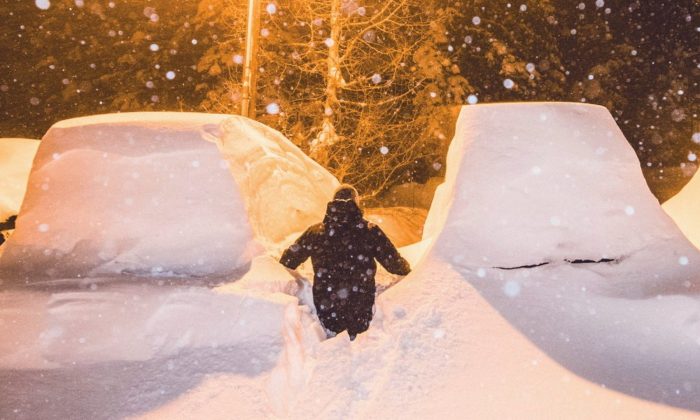 SAN FRANCISCO—A forecast of more snow and intense winds in the Sierra Nevada mountains has prompted authorities to issue blizzard and avalanche warnings and say that conditions could become “life-threatening.”

A winter storm sweeping across California and Nevada has dumped as much as 8 feet of snow over the past two days. Much more is expected over the next two days.

The National Weather Service says 8 feet fell at the June Mountain Ski resort north of Mammoth Lakes and up to 3 feet were reported in the resorts around Lake Tahoe since Feb. 1.

We’re open! Storm total is currently 6-8’ and we’re still counting. Face Left is going off and chair two is also expected. It’s deep out there, always ski or ride with a friend and stay clear of tree wells. pic.twitter.com/IOIYLbe0QS

Forecasters say a blizzard from Sunday night to Monday night could bring another 8 feet of snow to the highest elevations, and light snow down to the foothills.

The weather service warned people to stay indoors until the snow and winds subside.

Residents who were ordered to evacuate over fear of mudslides in Santa Barbara County are being allowed to return home.

The #SantaBarbaraCounty Sheriff’s Office, in consultation with fire agencies and other public safety officials, has announced that effective at 9a.m. today, February 3, Evacuation Orders are lifted for all areas in Santa Barbara County. More info at: https://t.co/7oAZaSLclj pic.twitter.com/G0s1b77ptd

Evacuations were ordered or recommended on Friday, Feb. 1, for neighborhoods near the Thomas, Whittier and Sherpa fire scars.

Authorities said showers were expected through Tuesday, but the rain wasn’t expected to be heavy enough to cause debris flows.

More than a year ago, a downpour on the huge Thomas Fire burn scar unleashed a massive debris flow that destroyed or damaged hundreds of homes in the seaside community of Montecito. The disaster killed 21 people and two others have never been found.

Avalanches in the Italian Alps Kill at Least 5 Skiers

ROME—Rescuers have found the bodies of three skiers in Italy’s Alps and are searching for a fourth, raising the death toll in recent avalanches in the country to at least five.

The Valdostano Alpine Rescue aircraft on Monday, Feb. 5, searched for two British and two French skiers who were reported missing a day earlier, the team spotted the three bodies. Dogs were helping in the search. RAI state radio says the missing skier is French.

On Sunday, two Italian skiers were killed by avalanches—one in the Valle d’Aosta region, the other in the Alto Adige (South Tyrol) region.

Authorities had warned that avalanche danger was high in the Italian Alps over the weekend.

In a non-avalanche fatality, an Italian snowboarder died in a fall in a crevasse Sunday in an off-piste area in the Valtellina Alpine area of Lombardy.