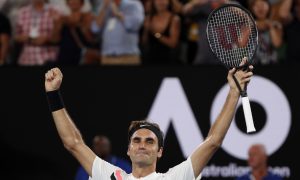 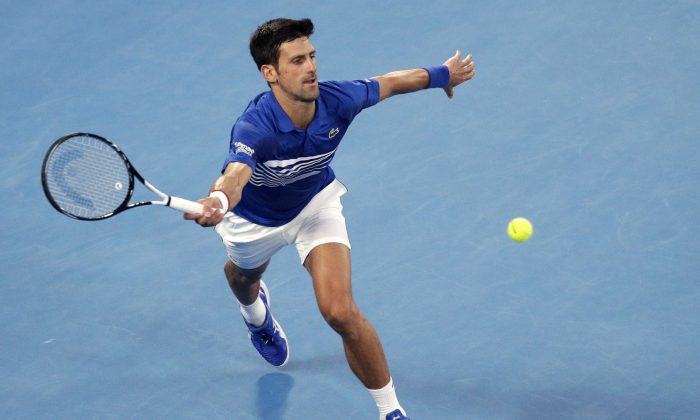 No. 1 Djokovic to Face No. 2 Nadal for Australian Open Title

MELBOURNE, Australia—Novak Djokovic was about as perfect as can be in his semifinal at Rod Laver Arena. Didn’t miss much. Almost couldn’t, really.

It was a performance so flawless, so fantastic, that it was easy to feel as if only one man on the planet might have a chance of preventing Djokovic from claiming a record seventh Australian Open title: Rafael Nadal. As it happens, that is who he’ll face in Sunday’s final.

Djokovic never relented, not for a moment, while making an unheard-of total of five unforced errors against an overmatched Lucas Pouille en route to a 6-0, 6-2, 6-2 semifinal victory that lasted less than 1½ hours.

Novak how would you describe your performance tonight?@DjokerNole defeats Pouille 6-0, 6-2, 6-2. Only 5 unforced errors ???? pic.twitter.com/V9vWoMOdSc

“I guess you’re driven by some force that takes over you, and you feel divine. You feel like in a different dimension,” Djokovic said. “It’s quite an awesome feeling that we all try to reach and stay in. Probably the biggest challenge, I think, is how to repeat that, how to stay there for as long as you possibly can.”

This was as good as he gets. As good as it gets.

“When he’s playing like this,” the 28th-seeded Pouille said, “yeah, he’s the best in the world, for sure.”

Now Djokovic will line up against his old rival, Nadal, for the 53rd time on tour, eighth in a Grand Slam final.

It will be the No. 1-ranked Djokovic—owner of 14 Grand Slam titles, including the past two—against No. 2 Nadal, who’s won 17 majors. Roger Federer, with 20, is the only man whose total is higher.

“I would definitely want to buy a ticket,” Djokovic told the crowd.

The rematch of the longest Grand Slam final in tennis history is here.#AusOpen pic.twitter.com/7VtKTkxGD6

“Once-in-a-lifetime experience,” Djokovic called that one, “and hopefully the outcome can be the same for me.”

A Pep Talk From Son Helps Djokovic in Australia

Fans across the world tuned in to see Novak Djokovic set up an Australian Open final against Rafael Nadal with a straight-sets win over Lucas Pouille.

His son was not among them.

Four-year-old Stefan was busy with other things, although he took time to give his old man a pep talk.

“No, my son is not watching me. He’s going to pre-school,” the six-time Australian Open champion said in his on-court interview. “I actually talked with him 45 minutes before the match. He was telling me about Spiderman. About, he was acting as a fish in an aquarium.

“He just tells me good luck—and make sure you win.”

“To be a father, there’s no better thing that happened in my life,” he said. “With my wife, we’ve been together 15 years, now we’re the parents of two angels. For me, this is life.”

The unseeded pairing of Sam Stosur and Zhang Shuai have won their first Grand Slam doubles title together, beating defending champions and No. 2-seeded Timea Babos and Kristina Mladenovic 6-3, 6-4 in the final.

The victory Friday was the 10th in a row for Stosur and China’s Zhang. Their most recent loss was against Babos and Mladenovic at last year’s U.S. Open.

Stosur is the first Australian to win the women’s doubles title at the country’s Grand Slam tournament since Alicia Molik teamed with Svetlana Kuznetsova of Russia in 2005.