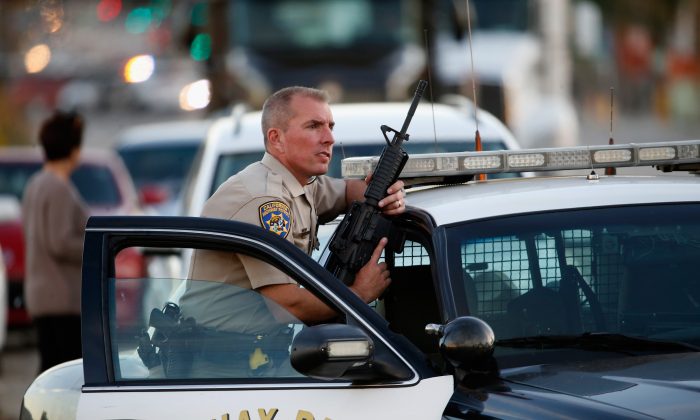 A California Highway Patrol officer stands with his weapon as authorities pursued the suspects in a shooting that occurred at the Inland Regional Center in San Bernardino, Calif., on Dec. 2, 2015. (Sean M. Haffey/Getty Images)
US

The Latest: AP Source: No ‘Significant Players’ in Contacts

SAN BERNARDINO, Calif.  — The latest on the mass shooting at a social service facility in San Bernardino, California (all times local):

A U.S. official says the FBI was treating the mass shooting in California as a potential act of terror but had reached no conclusion it was.

The official was briefed on the investigation but wasn’t authorized to discuss it by name and spoke on condition of anonymity.

The official said Syed Rizwan Farook communicated with individuals who were under FBI scrutiny in connection with a terrorism investigation. But the official said the contact was with “people who weren’t significant players on our radar,” dated back some time, and there was no immediate indication of any “surge” in communication ahead of the shooting.

The official said Farook and his wife weren’t on the FBI’s radar before the shooting, which killed 14.

The official said the communication was a “potential factor” but cautioned that “contact with individuals who are subjects of investigations in and of itself doesn’t mean that you are a terrorist.”

One of the shooters who killed 14 people at a California social service center was a conditional resident in the U.S. after marrying a citizen.

The FBI says Tashfeen Malik came to the U.S. in July 2014 on a Pakistani passport and a so-called fiancée visa. To get the visa, she had to submit to an in-person interview and biometric and background checks to ensure she wasn’t a threat to public safety or national security.

By law, Malik had 90 days to get married or leave the country. She became a conditional resident after marrying Syed Farook. Two years after the wedding, she could have applied to stay in the U.S. permanently.

Malik and Farook opened fire on a holiday banquet of Farook’s co-workers and then died in a shootout with police Wednesday.

A U.S. intelligence official says one of the shooters who killed 14 people in California had been in touch on social media with extremists who are under FBI scrutiny.

The official would not further describe the contacts by Syed Rizwan Farook. He would not be quoted because he was not authorized to discuss the matter publicly.

The official says investigators are still trying to determine whether and how he became radicalized and whether he was in contact with any foreign terrorist organization.

Rep. Adam Schiff, the top Democrat on the House Intelligence Community, says it’s premature to conclude that one of the California attackers was self-radicalized or “moved by some international actor.”

Schiff told CNN on Thursday that he had been briefed by the FBI in the morning and that information is continuing to come in.

He says it’s possible that the killings of 14 people were connected to terrorism but that it’s also possible it was workplace violence or a combination of the two.

He says investigators are looking through social media and chasing down both foreign and domestic leads to look for connections to terrorism.

But he says federal authorities are not in a position to conclude that Syed Farook self-radicalized.

A friend says a man who was killed in the rampage at a Southern California social service center worked with one of the shooters and they had a heated conversation about Islam two weeks before the attack.

It’s not clear if the discussion was a factor in the attack.

Kuuleme Stephens says she happened to call 52-year-old Nicholas Thalasinos while he was at work and having a discussion with Syed Farook.

Thalasinos identified Farook by name and told her Farook believed Islam was a peaceful religion.

Stephens says both men worked as county restaurant inspectors and regularly discussed politics and religion. Thalasinos identified as a Messianic Jew and was passionate about pro-Israel causes.

Thalasinos’ wife, Jennifer Thalasinos, told The New York Times that her husband had talked about Farook but never said anything negative.

A woman wounded during the rampage at a Southern California social service center managed to text her family after she was shot.

Julie Paez’s son, Nick Paez, said Thursday that his mother was shot at least twice and a bullet shattered her pelvis. She tests water safety for the county health department and was attending a holiday work gathering Wednesday when attackers killed 14 people.

Nick Paez says his mother was able to send her family a message through a group chat app to say she’d been shot and included a selfie that showed just her face.

He says the family “didn’t know if she was alive or dead” after receiving the photo.

Paez’s father frantically checked hospitals. Nick Paez says they had to wait eight hours to see her as she underwent surgery and then went an intensive-care unit.

Authorities say the woman who helped her husband kill 14 people a banquet at a social service center in Southern California had a Pakistani passport and came to the U.S. on a fiancee visa.

He said at a news conference Thursday that the bureau doesn’t know all the countries Farook went to and that a motive for the shooting is not yet known.

San Bernardino Police Chief Jarrod Burguan says the couple had more than 1,600 bullets with them when they were killed in a gunbattle with police.

Police say the attackers who killed 14 people at a banquet in Southern California had more than 1,600 bullets with them when they were gunned down in their SUV.

San Bernardino Police Chief Jarrod Burguan said at a news conference Thursday that the shooters had more than 3,000 rounds of ammunition at their home, 12 pipe bombs and hundreds of tools that could be used to make improvised explosive devices.

Burguan says Syed Farook and his wife sprayed the room at a social service center in San Bernardino with bullets but police didn’t know if any one person was targeted.

Police and the FBI say the attack was planned but they do not know a motive.

Police say they found 12 pipe bomb devices at a California home being searched in connection with a mass shooting as well as hundreds of tools that could be used to make improvised explosive devices.

San Bernardino Police Chief Jarrod Burguan said at a news conference Thursday that the attackers also left a device at the social service center where they opened fire. The device consisted of 3 connected pipe bombs with a remote control that apparently did not work.

Authorities say Syed Farook and his wife or fiancee killed 14 people at the center Wednesday. The chief says the attackers fired between 65 and 75 rounds at the center. They later died in a gunbattle with police.

Burguan also says the number of people injured in the mass shooting has risen from 17 to 21.

President Barack Obama is ordering U.S. flags to be flown at half-staff to honor the victims of the shooting in California that left 14 people dead.

Authorities say Syed Farook and his wife or fiancee killed 14 people at a social service center Wednesday before dying in a gunbattle with police. He fired on colleagues at a holiday gathering for county health employees.

Divorce papers from the parents of one of the San Bernardino, California, attackers reveal an acrimonious split in which the wife accused her husband of being an abusive alcoholic.

The records obtained Thursday by The Associated Press show that Syed Farook’s mother, Rafia, described her husband in 2006 as “irresponsible, negligent and an alcoholic.”

She said she was forced to move out of her home with three of her children because her husband continually harassed her “verbally and physically and refused to leave the home.”

She filed a no-contact, stay-away domestic violence protection petition on July 3, 2006. She alleged that same year that her husband attacked her while her kids were present, dropped a TV on her and pushed her toward a car.

Authorities say Syed Farook and his wife or fiancee killed 14 people at a social service center Wednesday before dying in a gunbattle with police.

No one answered the door at the father’s home in Corona, southwest of San Bernardino.

Obama is speaking in the Oval Office. He’s assuring Americans that authorities will get to the bottom of what happened. The president also is calling for people to wait for facts before making judgments.

Obama says many Americans feel there’s nothing they can do about mass violence. But he says “we all have a part to play.”

The president says the nation must make it harder to carry out violence but acknowledged that the threat can’t be eliminated completely. He says it will be important for all Americans, including state legislatures, to see what they can do.

Ten shooting victims are being treated at two hospitals following the massacre in San Bernardino, California.

San Bernardino County spokeswoman Felisa Cardona says all five patients at Arrowhead Regional Medical Center are in stable condition Thursday morning. She says one other patient left the hospital after being treated Wednesday.

Heinrich praised first responders and hospital staff, saying “there’s nothing really you can do to prepare for an event like yesterday.”

Authorities say Syed Rizwan Farook and his wife or fiancee, Tashfeen Malik, killed 14 people in a precision attack Wednesday at a social service center before they died in a gunbattle with police.

U.S. Attorney General Loretta Lynch says the Justice Department will be offering “any and all assistance necessary” as the investigation into the California mass shooting continues.

Lynch is speaking at an event about criminal justice at the White House. She says the shooting in California was “unspeakable.”

Lynch says the government doesn’t know a lot yet about the incident. But she says the FBI, the U.S. Marshals Service and other federal authorities have been dispatched.

The attorney general says whatever the results of the investigation, there’s no place for this type of violence in the U.S. She says that’s not what the country stands for or works for.

Police and federal agents are for a second day searching a home in connection to the massacre inSan Bernardino, California.

A search team combed the residence early Thursday in neighboring Redlands, about 7 miles from the shooting at Inland Regional Center.

A black sedan parked outside was also searched.

The home is where officers initially saw a vehicle matching the description of the suspects’ SUV in the hours before the final gun battle that killed them. A bomb squad on Wednesday swept the building with robots.

Police didn’t immediately say if the suspects — Syed Rizwan Farook and Tashfeen Malik — lived at the home. Public records show it is a possible residence of a family member of Farook.

Residents tell KABC-TV Redlands is a “sleepy little town” and expressed shock that the killers might be their neighbors.

Federal authorities say that the two assault rifles and two handguns used in the San Bernardino massacre were all purchased legally in the United States — two of them by someone who’s now under investigation.

Meredith Davis of the Bureau of Alcohol, Tobacco, Firearms & Explosives says investigators are now working to make a connection to the last legal purchaser.

She says all four guns were bought four years ago but she’s not saying whether they were purchased out of state or how and when they got into the hands of the two shooters.

She also says the rifles involved were .223-caliber — powerful enough to pierce the standard protective vest worn by police officers, and some types of ammo can even plow through walls.