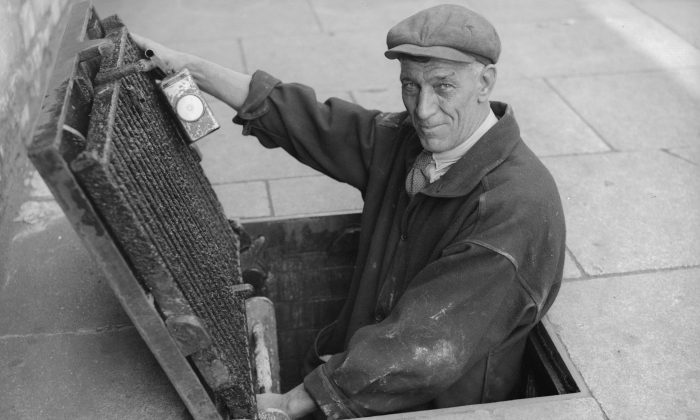 In 1726, 20-year-old Benjamin Franklin was finally sailing back to Philadelphia after being stranded in London for two years. His hopes for establishing a business enterprise were dashed when the loan he was expecting failed to come through.

While on the ship, Franklin wrote in his journal a “Plan for Future Conduct.” He wanted to make a fresh start, and wanted to learn from his experience. Franklin wrote out four resolutions by which to order his life. Among them, he resolved “to apply myself industriously to whatever business I take in hand, and not divert my mind from my business by any foolish project of growing suddenly rich; for industry and patience are the surest means of plenty.”

The American founders considered industry a republican virtue because it enables a person to attain economic independence, a preliminary condition for practicing self-government. A nation of debtors—like a fiefdom of serfs—can’t be free.

“Preserve your freedom,” he wrote, “and maintain your independency: be industrious and free; be frugal and free.”

The virtue of industry includes both physical exertion—a willingness to work—and spirited stick-to-itiveness—a capacity to sustain concentration. The 21st century has brought particular challenges to both of these components of the virtue of industry.

First, an unprecedented number of distractions tempt our focus away from whatever task is at hand. Second, several sources of influence have combined in U.S. culture to denigrate the image of blue-collar work and the value of manual labor in general.

The Threat of Distraction

Effort and focus have never been easy to sustain, but in a world where we use computers and smartphones for both work and amusement, it is especially difficult. The line between leisure and labor is often easily blurred.

Perfecting the means of distraction on our ubiquitous screens has now become an art form and a multibillion-dollar industry. Social media and smartphone apps are designed to be addictive.

We can only begin to combat this impediment to the development of the virtue of industry in the same way we begin to combat any addiction: by first acknowledging the scale of the problem.

Dissolution of Inducements to Industry

For the past several decades, we’ve swallowed the idea that the pursuit of happiness now requires and thus entitles everyone to attain a college degree and get a job somewhere on the good side of Easy Street. We forgot that Easy Street still needs street-sweepers and road repairmen.

We’ve taken on back-breaking levels of debt to achieve this particular pursuit of happiness, as though that plan were a guaranteed “project of growing suddenly rich.” We’ve abandoned Franklin’s advice and accepted its antithesis: We eagerly put on the chain of debt in order to avoid a job that might require we actually work hard.

Presidential candidate Sen. Elizabeth Warren (D-Mass.) is proposing universal free public college education and the cancellation of student loans. Aside from rendering irresponsibility free of consequence, her policy would punish those who scrimped and slaved, working industriously while they were in school to avoid taking out more student debt than was prudent.

In his day, Franklin criticized the English for establishing “a heavy tax for the support of the poor.”

“The day you passed that act,” he wrote, “you took away from before their eyes the greatest of all inducements to industry, frugality, and sobriety, by giving them a dependence on somewhat else. … You offered a premium for the encouragement of idleness, and you should not now wonder that it has had its effect in the increase of poverty.”

Bad policies from Washington are not the only threats to the virtue of industry today. Mike Rowe, the host of the award-winning TV show “Dirty Jobs,” identified three other threats.

First, the tech giants of Silicon Valley have helped encourage innovation over imitation, such that fewer young people are interested in mastering one of the old trades, even though those skills are just as necessary for modern life as they ever were.

Second, the fashion purveyors of Madison Avenue have tried to sell an image of the good life as one in which one works as little as possible and all work is undesirable.

Third, the culture architects of Hollywood have done their level best to denigrate blue-collar workers in films and on TV.

Altogether, these sources of influence have formed society’s perception of working-class jobs as undesirable and unrespectable. “We’ve declared war on work as a society,” Rowe concluded.

In response, Rowe has made it his mission to renew awareness about “the importance of changing perceptions and stereotypes around blue-collar work.” As part of that mission, Rowe has launched a campaign “to reinvigorate the skilled trades.” Further, he launched the website, mikeroweWORKS, to focus “on all the issues related to the widening skills gap, aging workforce, high unemployment and millions of unfilled jobs. It also provides comprehensive resources for anyone looking to explore those vocations.”

I had the privilege of apprenticing for three years in a small cabinet shop in the Bronx under the guidance of a master woodworker. He was to me a sage, who possessed knowledge of an ancient art that could only be learned through hands calloused by thousands of hours of careful labor in a dusty woodshop. Such men deserve our respect, all the more since their skills are learned through their own exercise of industry.

To practice self-government, we must first free ourselves from our financial chains by applying ourselves industriously to whatever business we take in hand. Slaves aren’t free to participate in the conversation about the common good; they are free only to vote for food to fill their starving bellies.

As Franklin advised, “Be industrious and free; be frugal and free.”