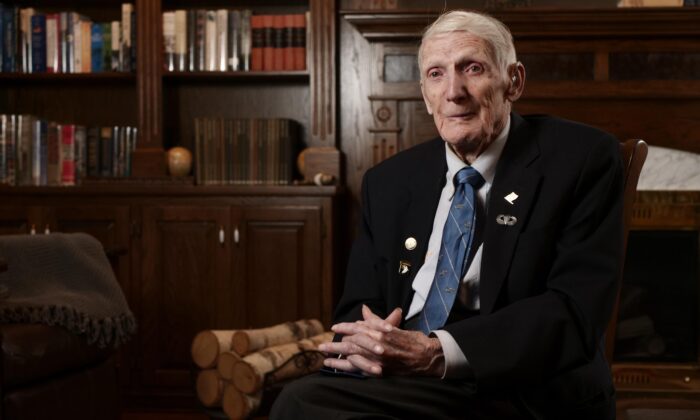 Jim “Pee Wee” Martin remembers vividly where he was 78 years ago today.

He can’t forget when he was floating to the ground from a plane in Nazi-occupied France facing heavy fire from the Nazis below.

It was D-Day, just after midnight on June 6, 1944, when he made his first combat jump and landed at the drop zone behind Utah Beach.

Now 101, Martin is the last remaining “Toccoa Original,” a group that was highlighted by the HBO mini-series “Band of Brothers.”

He is the subject of a book, a documentary, and now a song that was released on June 3.

On a comfortable, warm afternoon on June 5, Martin recounted his story to The Epoch Times while sitting on the porch of his country home in Sugarcreek Township, Ohio, with two of his granddaughters and a great-grandson.

It’s a story he has told frequently all over the world, so that current and future generations never forget what really happened in World War II.

Given the nickname “Pee Wee” because of his slight stature, Martin served with G Company in the 506th Parachute Infantry Regiment (PIR) of the 101st Airborne Division.

Their journey overseas started in Wiltshire, England, and continued through Normandy, Holland, and the Battle of the Bulge before ending at Hitler’s Eagle’s Nest in Berchtesgaden.

Martin was awarded the Bronze Star, Purple Heart, and European African Middle Eastern Service Medal for his service, but he doesn’t talk about that. Instead, he remembers the relationships with his fellow Screaming Eagles.

“When you are in a foxhole and under heavy fire, all you have are your friends who are with you, and those become strong relationships,” Martin said. “For 50 years or so after the war, we all remained friends and saw each other on occasion. I miss them.”

Martin’s family moved to the Dayton, Ohio, area in 1931, and before entering the war, he worked for a tool and die shop. Initially, he had no plans to sign up for the military.

“Our country became very isolated and didn’t want anything to do with war after what had happened in World War I,” Martin said.

“My feelings changed when I would see newsreels at the theater and hear stories on the radio about what Hitler was doing, and it was evident England and France could not take care of this alone,” he said.

“Men I knew who were 35 and had three kids were getting drafted, and there I was much younger and no family at the time, so I knew what I needed to do.”

Martin was fascinated with parachute jumping and submarines. Both factored into his war-time decision.

“When I was 5, I saw a parachute jump at a county fair in Bedford, Indiana, and thought it would be fun to try, but I was passionately interested in submarines,” Martin explained. “I was accepted into the Navy, but they told me it would be six months before the submarine was ready. I couldn’t wait that long, so I went across the hall and signed up to be a paratrooper.”

At the time, a paratrooper was a new type of soldier, and the 101st Airborne was just formed. Martin was assigned to Camp Toccoa, Georgia, where he joined the 506th Parachute Infantry Regiment and embarked on a demanding training program under Col. Robert Sink.

The training was so intense, Martin recalled, that he was one of 6,500 when it started. Only 1,650 remained when they deployed overseas.

“We hated Col. Sink while in training. But when we got to combat, we saw why he did what he did [with training],” Martin said. “He stayed with us all the way through. We started together, worked together, and went into combat together. We were a cohesive unit.”

The 101st had more training in England before the moment arrived for Operation Overlord, or D-Day.

At 23, Martin was among the oldest in his group, surrounded mostly by teenagers.

Not knowing what to expect as they dropped onto the northern coast of France in the darkness of night, they landed at Drop Zone D, otherwise known as “the slaughterhouse.”

“We jumped right on top of them, and some guys were killed,” Martin said. “We lost a colonel and a company commander.”

There was mass confusion when they gathered after touching the ground. They weren’t sure where they were. One soldier climbed up a pole for a clearer view, and they started walking down a path.

“There were banks on each side, German artillery and U.S. artillery both were shooting at us, and the place was littered with bodies,” Martin recalled.

“There were more German forces than expected,” he added. “We were initially told to give three days of hard fighting, and then we would be out and onto the next objective. We were there for 33 days.”

In the early morning hours of June 6, 1944, there were two objectives, Martin said.

The mission was successful, and after 33 days, the 101st fought in Operation Market Garden in Holland. It was Martin’s second combat jump. Then, on Dec. 16, 1944, the Germans launched their last major offensive, with 200,000 soldiers and 1,000 tanks, in the Battle of the Bulge.

The Screaming Eagles thought they were getting a furlough and then shipping off to Japan in the Pacific Theater. Instead, they were transported by truck to Bastogne, Belgium. They had few rifles, little ammunition and were not prepared for the harsh temperatures that dropped below zero.

“We were so cold we didn’t have the energy to shiver. I remember that my Christmas dinner was snow,” Martin said. “But the mission was important.

“The Germans broke through and we had to hold them. There were seven roads and three railroads in that town,” he added. “But if we can hold that town, we can stop them. And that’s why that was so important.”

When he returned home from the war, Martin met Donna, and the couple married in 1946. They were husband and wife for 72 years and raised a family on the same tranquil country land where he still lives.

Martin built the house with his own hands, paying for materials in cash as money permitted. They built the basement and the barn while the construction continued. Martin worked multiple jobs in the tool and die industry, and the family didn’t have much in material possessions, but they were happy.

“We had a good life together,” Martin, a widower, said. “I still have a very good life here.”

In 2021, Emmy Award-winning filmmaker Tracie Hunter released “A Rendezvous with Destiny,” a documentary based on Lt. Col. Jos Groen’s book, “Three of the Last Screaming Eagles.”

The book and film feature Martin, Dan McBride, and Dick Klein and focus on the history of the 101st Airborne Division and the three veterans’ shared experiences of D-Day, Operation Market Garden, and the Battle of the Bulge.

Groen asked Hunter, who founded a nonprofit called WWII Beyond the Call, to make the documentary. McBride and Klein have died since the interviews, but Martin continues to enthusiastically tell the story of the Screaming Eagles.

On June 3, the most recent tribute to Martin was unveiled. Nashville-based country recording artist Karen Waldrup released “Normandy,” a song that resulted from teaming up with Martin and listening to his story.

A Louisiana native, Waldrup first learned about Martin when she was performing a set at a 2021 birthday party in Ohio—an event that happened to be Martin’s 100th’s birthday celebration.

“At first, it was a gig like any other gig. But then I learned from my manager that it was his birthday party,” Waldrup told Military.com. “When we got all the details, we learned it was a charity event for veterans. I got excited, that was it for me, so we loaded up our stuff and went.”

Waldrup developed a friendship with Martin and his granddaughter, Jodi Martin, and they stayed in touch.

At her next stop, a songwriting festival in Key West, Waldrup saw a friend who is connected to a veteran songwriting association.

“Their whole mission is to ask veterans to write with us, so that we can use our God-given skills to craft and create music to sing their story,” Waldrup explained.

That inspired Waldrup to collaborate with Martin, and her path led to his Sugarcreek Township home, where she documented his story during a four-hour conversation.

“My goal was to make the song in his words,” Waldrup said. “So if you listen to ‘Normandy,’ they’re not my words at all. They’re all his words.”

Martin’s 101st birthday was April 29, 2022. Waldrup presented him with a battery-operated jukebox that played the song amid a large crowd.

Waldrup never thought about distributing the song. It was originally intended as Martin’s birthday gift. People heard it, word spread, and Waldrup decided to release “Normandy” on June 3.

The creation of a life-size bronze statue featuring Martin’s likeness is also in the works and will be located in Sugarcreek Township when it is unveiled. Honoring Martin’s request, a plaque including the names of everyone who served in the 506th will be part of the monument. The status will be part of a veterans’ memorial park that will honor all of  those who served.

Organizers are selling bricks to help fund the statue. Jodi Martin is executive director of the Bellbrook-Sugarcreek Area Chamber of Commerce. To help raise funds for the monument, she will jump out of a vintage C-47 at the military convention Force-Con 2022 on Sept. 24, 2022, in Coronado, California. She will be accompanied by her grandfather’s close friend and tandem jump master Art Shaffer.

Life has not slowed down for Martin since he turned 100 with the extensive interest in his personal story, and the accounts of the Screaming Eagles.

His 100th and 101st birthdays were commemorated with “jump fests.”

Friends, family members and supporters parachuted out of historic C-47s to commemorate the veteran’s gift of another year.

On the 70th anniversary of D-Day in 2014, he parachuted at the same spot where he landed on that history-changing day. He last jumped two years ago at the age of 99.

Martin cherishes time with his family and relaxing at his country home where deer run free and not much has changed since 1946, except for the density of the mature trees.

He continues to tell his story so that current and future generations understand their path from D-Day all the way through arriving at Hitler’s Eagle’s Nest. He remains as humble as his mind remains sharp about his war-time experience.

“I’m not a hero, and none of the guys feel we are heroes,” he said. “A hero is someone who does something out of character with no training and no worry about his own personal safety, like a person who stops to get someone out of a burning car. We volunteered for this. We trained for this.

“When you live in a country like this, it’s your obligation to go when you are called. I consider it an honor and privilege to be part of history,” Martin added. “We went over there with the Allies to get rid of a tyrant in the world. The world would have been a different place if this had not happened.”