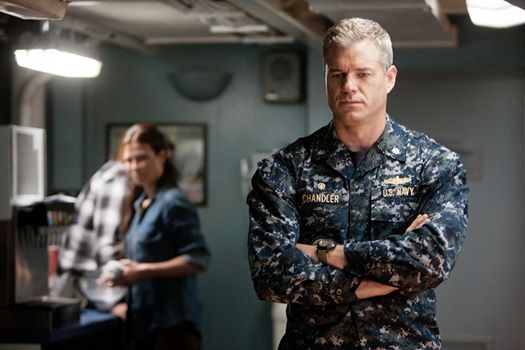 The Last Ship on TNT has been so popular that it’s already been renewed.

“The Last Ship is a blockbuster hit in its first season, not only among total viewers but also among key adult demos,” the network said in the announcement.

“The action-packed drama from executive producer Michael Bay has averaged more than 7.2 million viewers in Live + 7 delivery in its first season and currently ranks as basic cable’s #1 scripted series this summer with adults 18-49 and adults 25-54.”

Some of the cast members and producers on the show gave some spoilers into the rest of season 1 and season 2 at the San Diego Comic-Con.

First off, the Russians will be back. And XO Slattery will take over the ship briefly at one point, while there’s concern about Lt. Danny Green becoming sick in episode 6 (July 27), because it might be the virus.

The description for episode 6 also says that: “Losing faith in Rachel and her failing vaccine trials, Chandler now has to deal with a restive crew. If he fails to keep the crew together, the whole mission is in jeopardy.”

Executive producer Hank Steinberg said that the season 1 finale will be a good one.

“It drives the series to a whole new direction.”

The official descriptions for the episodes also give more insight into the rest of the season. It appears that Slattery takes over the ship in episode 7 (August 3), when Chandler and a small team respond to a distress call near Jamaica, but a surprise attack leaves Chandler and Tex stranded at sea.

Episode 8 will see Slattery trying to find them before the enemy (the Russians or someone else?). Episode 9 (August 17), the one before the season finale, sees Rachel and Chandler ask for six volunteers to participate in human trials of the vaccine.

This episode will also show Chandler’s wife and father battling to survive back in the United States.