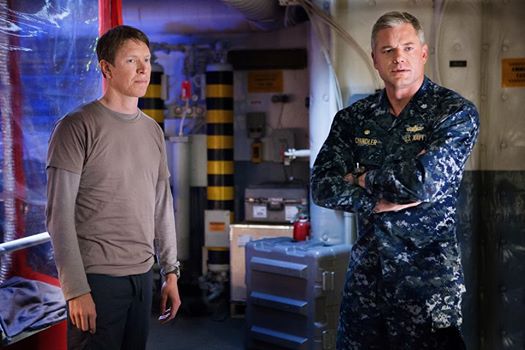 The Last Ship season 1 finale is set for Sunday night and fans are wondering about season 2.

Many fans probably already know that TNT announced a renewal for The Last Ship a while back, because it’s been so successful.

The main question is about the plot in season 2–what’s going to happen now that the captain and the rest are back in the United States?

The description and a preview for episode 10, or the season 1 finale, shows that things get tense fast because the government appears gone back at home while a renegade group has taken over an increasingly large area, killing people who are infected.

The finale also features more of guest star Titus Welliver (Lost, The Good Wife), who Chandler’s wife witnessed kill an infected woman in episode 9. It seems he has something against Chandler and the crew, who are trying to get to Fort Detrick to mass produce the cure.

Chandler’s father, meanwhile, is trying to get the family to the mysterious “Olympia.”

There’s very little information out about what season 2 holds, although executive producer Hank Steinberg said at Comic-Con that “Season 1 ends with a complete cliffhanger turn that upends the whole series,” reported Zap2It.

“It drives the series to a whole new direction,” he added.

There’s no set premiere date for season 2, but it will definitely premiere sometime in 2015, probably around the same time that season 1 premiered (June 22). Also, it will have 13 episodes as opposed to 10.

Check out a description of the season 1 finale below.

Chandler and his crew finally return home, where a former D.C. power player is fending off a dangerous warlord who threatens everyone’s hopes of restoring law and order in society. Now with a location and a means to finalize their mission, Chandler sets out to find his family, only to discover something absolutely terrifying about this brave new world.