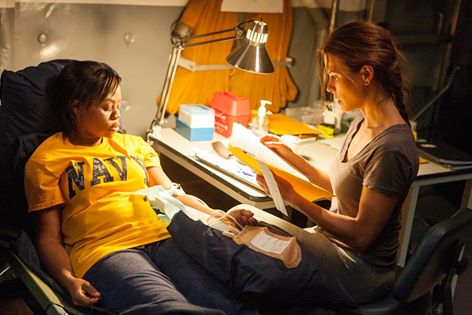 The Last Ship season finale is coming up on Sunday, August 24.

Episode 9, the last episode before the finale, airs on August 17.

Trials features six human volunteers participating in Rachel’s vaccine trials. “Meanwhile back in the States, Chandler’s wife and father are doing everything they can to keep their family alive,” according to the description from TNT.

There, they find “a former D.C. power player is fending off a dangerous warlord who threatens everyone’s hopes of restoring law and order in society,” according to TNT.

“Now with a location and a means to finalize their mission, Chandler sets out to find his family, only to discover something absolutely terrifying about this brave new world.”

Episodes 9 and 10 will feature guest star Titus Welliver (Lost, The Good Wife), who was originally cast as the second-in-command on the vessel but had to exit due to a family emergency.

TVLine reported that little is known about Welliver’s new character, except that he’ll have “a strong role influencing the future of the survivors.”

The Last Ship has been renewed for a season 2, and some hints about what will take place were revealed at Comic-Con.

“It drives the series to a whole new direction.”