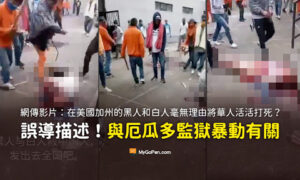 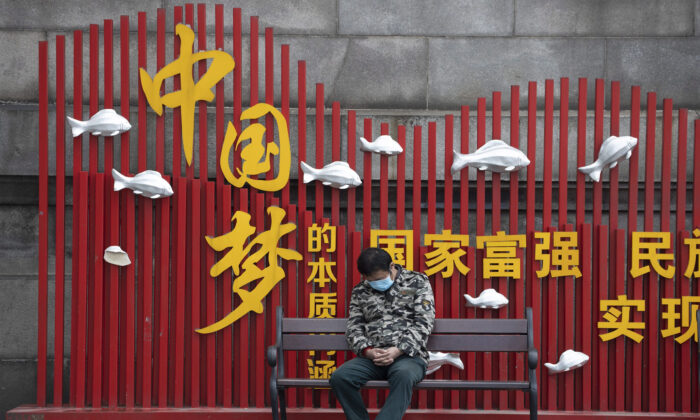 A resident wearing a mask naps on a bench near the government propaganda slogan "Chinese dream" in Wuhan, China, on April 1, 2020. (Ng Han Guan/AP Photo)
Viewpoints

The Key Difference Between Chinese Propaganda and American Propaganda

“We become slaves the moment we hand the keys to the definition of reality entirely over to someone else.” — B.W. Powe

When you think of North Korea, what words come to mind? Famine. Terror. Misery. What about propaganda? This year marks the 10th anniversary of Kim Jong-il’s death, a man who led a very busy life. The North Korean despot was a world-class golfer and he also invented the hamburger.

Of course, Kim Jing-il didn’t invent the hamburger, nor was he an elite golfer, but people in the hermit kingdom were taught to believe such nonsense. For far too many, the nonsense became undeniable truth.

Like something out of George Orwell’s “1984,” the ruling Chinese Communist Party (CCP) has a department dedicated to the dissemination of propaganda. In February of this year, Xi Jinping, somewhat miraculously, declared a “complete victory” over poverty. The socialist system, he argued, had turned an economic (and literal) famine into a glorious feast. Try telling that to the 600 million Chinese who survive on less than $150 a month. Truth, we’re told, is the first casualty of war. In North Korea and China, where a never-ending war of propaganda has been waged on citizens for decades, truth perished a long time ago.

In the United States, thankfully, truth reigns supreme, or so you might think. However, this is a peculiar time to be alive, with people urged to speak “their” truth, rather than “the” truth. If it feels right, then say it. To hell with facts. Who needs them? Let fictitious narratives guide the way.

Across America, from elementary school classrooms to Silicon Valley workplaces, false narratives and loose interpretations of reality pose a direct threat to society. As the author Peter Wehner recently wrote, the country finds itself “in the grips of an epistemic crisis,” with millions of Americans struggling to “distinguish fact from fiction.” This struggle, he posits, “poses an existential threat to liberal democracy.” Similarly, Andrew Sullivan writes, “can you not see that the Republicans may be acting, but they are also reacting—reacting against something that is right in front of our noses?” What is it that they are fighting, exactly? “A specter of invisible and unfalsifiable” ideas that have “arrived to hover over” each and every American citizen. In other words, they’re fighting propaganda. “Culture, economics, poverty, criminality, family structure: all are irrelevant,” writes Sullivan, “unless seen as mere emanations of white control.” Like many Americans, Sullivan finds such thinking highly disturbing. To argue against this version of “truth,” however, is to open oneself up to a world of accusations and smear campaigns.

Highly influential authors like Ibram X. Kendi and Robin DiAngelo have played a pivotal role in the distribution of such nefarious ideas. More worryingly, they have profited handsomely in the process. In the past, DiAngelo has earned $15,000 for just 90-minutes of work. Meanwhile, Kendi, who recently wrote a book called “Antiracist Baby,” is the director of the Center for Antiracist Research at Boston University. The position, one assumes, pays quite handsomely.

Joseph Goebbels, arguably the most effective propagandist of all time, once said, “it would not be impossible to prove with sufficient repetition and a psychological understanding of the people concerned that a square is in fact a circle. They are mere words, and words can be molded until they clothe ideas and disguise.”

Kendi and DiAngelo have certainly molded language to fit their goals, successfully turning words like “white” into shameful utterances. Furthermore, like charismatic cult leaders, they have inspired a generation of zealots, many of whom now scour social media platforms with the fervor of the Chinese Ministry of Public Security, identifying any dissenters and signaling them out for punishment.

There is a striking difference between modern-day propaganda in China and modern-day propaganda in America. Although many Chinese youngsters resent the current regime, they don’t resent their country. In fact, many of them love China. They want to remove those in power, but they have no desire to destroy the country. In the United States, however, things look a little different. Only 43 percent of Americans are “extremely” proud of their country, according to a Gallup survey. With aggressive propaganda campaigns being rolled out in schools across the country, expect the number to drop even lower.

Brad Jones, in a recent piece for The Epoch Times, discussed the destructive nature of race-based politics. More specifically, he discussed the ways in which California is now pushing to make “ethnic studies a statewide requirement to graduate from high school.” For the uninitiated, ethnic studies is an interdisciplinary field of critical race studies, where students are taught to see inequalities everywhere–even where they don’t exist. The United States, argue hardcore adherents, was built on a foundation of systemic racism.

A fundamental difference between the leaders in Beijing and the leaders in Washington is this: when members of the Chinese Communist Party discuss enemies, they are talking about foreign adversaries, people outside of China who want to harm the Chinese people. In the United States however, Joe Biden and Kamala Harris regularly condemn Americans. Are some of their criticisms warranted? Of course. However, when they echo terms like “white privilege,” a term that I absolutely abhor, they are talking about 236 million Americans, ten percent of whom live in poverty. The idea that someone struggling to pay their bills is still privileged because of their skin color is as ridiculous as it is dangerous. But try telling that to the propagandists.