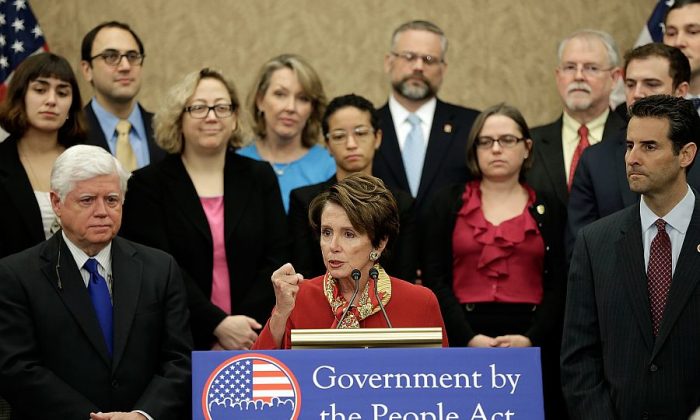 House Minority Leader Rep. Nancy Pelosi (D-Calif.) speaks during an event to announce the introduction of the Government by the People Act in Washington, D.C., on Feb. 5, 2014. The act is billed by Democrats as a “bipartisan bill to reduce the influence of big money in politics and provide key reforms to our nation's campaign finance laws.” (Win McNamee/Getty Images)
Opinion

The Justices and the Scramble for Campaign Cash

Many trends in American politics and government today make me worry about the health of our representative democracy. These include the decline of Congress as a powerful, coequal branch of government, the accumulation of power in the presidency, and the impact of money on the overall political process.

Recently, the Supreme Court’s five-member majority declared that it’s unconstitutional to limit the aggregate amount an individual can give to candidates, political parties, and political action committees. Campaign contributions amplify free speech, these justices maintain, and campaign finance laws violate the First Amendment: any limit on the ability of individuals to contribute to candidates is a restraint of free speech. The only legitimate cause for the government to step in is to fight blatant, obvious corruption; it should not act to limit access and influence by well-to-do donors. The result of this decision will almost certainly increase the impact of money on the political system.

The problem is, money doesn’t have to be handed over in an envelope filled with $100 bills to be harmful. The Supreme Court decision seems to be insensitive to what money is doing to the political system.

Big money is here to stay in politics. Those of us who wish it were otherwise have lost that argument—at least for the near term.

But we weren’t mistaken about the impact of free-flowing campaign cash on the system. Politicians need large sums of money to run for office, and they spend a lot of time raising it. They are keenly attuned to generous donors. Inevitably, this gives more political influence to the relative handful of wealthy donors (only a few thousand at best) who choose to “invest” in politics and often, though not invariably, get what they want. The influence of voters without the financial means to command attention is diminished.

Lawmakers, of course, insist that big donors get nothing in response for their contributions except, perhaps, for a little face time. I am skeptical of that claim. Money buys access that people without money don’t get, and access is nothing less than an opportunity to affect legislation.

It is a rare politician who can remain entirely uninfluenced by large political contributions to his or her campaign. After all, members of Congress seek assignments to committees that are known to be useful for fundraising, and those wealthy individuals and interests spend large sums on wooing and electing politicians for a purpose: to get public policy favorable to their views and interests.

Over many years both inside and outside Congress, I saw very little outright corruption, but on a frequent basis I could see money’s disproportionate influence on the decisions of government and its distortion of our representative democracy. With their decision the justices may have expanded personal liberty, but they’ve done so lopsidedly: boosting the liberty of ordinary individuals who cannot afford to give to political campaigns gains them nothing in the way of political influence.

The court’s decision further empowers a few rich people and disenpowers many ordinary people. This is not a desirable direction for our representative government. Our system should encourage a government responsive to all citizens, not just a few.

What can we do? I would prefer that the President and Congress step in and design rules of campaign finance that would reverse the growing influence of money on our campaigns, but that does not appear likely to happen. Indeed, even now opponents of campaign finance laws are preparing challenges to the remaining limits on individual contributions and to the easily avoided disclosure laws we already have. I’m certain they’ll get a sympathetic hearing in the Supreme Court.

Paradoxically, this may be our best hope. Because I also believe that Americans are growing tired of the outsized impact that great wealth enjoys in politics, and that a backlash to the court’s decisions is taking shape. My sense is that growing numbers of ordinary voters are recognizing that money is a poison in our system. I fervently hope that support for public financing and for muscular disclosure laws will grow with time, because our politics will be more democratic, more honest, and freer if we reduce the impact of money on elections.