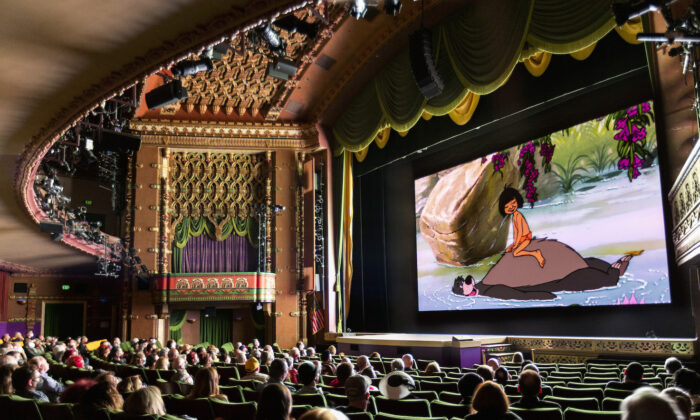 A view of the theatre at the screening of The Jungle Book (1967) at the El Capitan Theatre during the 2022 TCM Classic Film Festival in Hollywood, Calif., on April 22, 2022. (Getty Images for TCM)
Viewpoints

For four days in April, I was transported to a different world in downtown Hollywood. There were still homeless people on the sidewalk, street artists peddling caricatures to passersby, and a salesman huckstering bargain souvenirs over a loudspeaker—but once I stepped inside the historic theaters where the Turner Classic Movie Film Festival (TCMFF) was taking place, I left all that behind me. During the Festival, I saw fourteen films. Out of them, only one was an animated feature. Although TCMFF featured multiple films made as late as the 1980s, this cartoon was the only film I saw which was made later than the 1950s. This film is “The Jungle Book” from 1967.

Perhaps you grew up watching this Disney cartoon; maybe you even remember when it was released. This was definitely a childhood favorite for me. Having not seen it in several years, I was eager to rewatch it on the big screen. Out of the dozens of movies screened during the TCMFF, this was the only one played at the historic El Capitan Theatre, which was built by Sid Grauman in 1926 but has been owned by the Walt Disney Company since 1989. Since this was the festival’s only Disney movie, it’s understandable that it was played there. The actual screening of “The Jungle Book” was precluded by a live presentation featuring Floyd Norman, one of this film’s animators. He was interviewed by famous film critic Leonard Maltin. The discussion with the eighty-six-year-old animator was one of the reasons I made seeing this film a priority on my schedule.

Based on Rudyard Kipling’s writings of the same name, this cartoon is set in India. It is about the Man Cub (voiced by Bruce Reitherman), a little boy named Mowgli who is raised in the jungle by wild animals. After spending the first ten years of his life with a wolf pack, Mowgli must leave the jungle because a ferocious tiger, Shere Kahn (voiced by George Sanders), has returned to the region, seeking his life. The stern yet kind panther Bagheera (voiced by Sebastian Cabot) offers to take Mowgli to the local man village to live among his fellow humans. However, the lad wants to stay in the jungle, so he runs away from Bagheera and finds a fun-loving bear named Baloo (voiced by Phil Harris), who wants to adopt him. However, danger lurks around every corner.

Leonard Maltin observed that all the animators he has met share one characteristic: they are very youthful. Floyd agreed with the observation wholeheartedly, noting that animators never work a day in their lives. “It’s one of the best jobs in the world,” he said, adding, “I was doing the same thing I would have done for nothing. Being an animator keeps you young at heart. We were lucky to get to go to work each day. What better job? If you can’t feel good about that….” During his sixty-year career, Floyd has brought his talent and zest for life to countless movies and shows by working at Disney Animation Studios during the 1950s and 60s, Hanna-Barbera Cartoons, Inc. on television, and eventually for Walt Disney Animation Studios once more, this time also working on the new Pixar productions. His amazing career was documented in the 2016 documentary “Floyd Norman: An Animated Life.”

As a young animator, Floyd Norman’s first job at Walt Disney Studios was as an apprentice in-betweener. While the Nine Old Men, the core animators of the studio thus named by Walt Disney himself, designed characters and crafted the main imagery, in-betweeners copied their work in the filler drawings needed to piece scenes together. Floyd apprenticed with this job before becoming a full in-betweener after six months. It was tedious work but really important to the finished project, since “a crummy in-betweener could ruin a good scene,” as he described his in-between work once did to a scene by animator Frank Thomas. After that, he became a breakdown artist, an assistant animator, a key assistant, and eventually a full-fledged animator. Comedy was king at Disney in the old days, since Walt loved gags. Back in the 1930s, the Old Maestro, as Walt was lovingly called, would give $5 to anyone who thought of a good gag, which was no small sum during the Great Depression. Floyd proved that he fit right in by amusing his superiors with funny sketches he drew in his spare time.

Floyd got his big break when animator Andy Engman suddenly told him to move upstairs to work in the story department on “The Jungle Book” in 1966. In a regular studio, employees in the story department would work at a typewriter. Since Disney told stories visually, the story department, or “storymen,” put ideas on paper in sketches. They only worked with a grease pencil and a pad, but the drawings needed clarity to express ideas. These sketches were pinned on the story board, which was the outline for the whole film. At night, Walt would prowl the hallways of the studio, looking in offices to see what his team was creating, even inspecting the discarded sketches in their waste baskets. Everyone knew of this habit, so they were aware that Walt had probably seen and decided on their ideas before they presented them to him! When his employees presented their ideas to Walt, they knew he would either love them or hate them. Thankfully for Floyd, Walt loved the playful storyboards which he collaboratively created with director Wolfgang “Woolie” Reitherman and senior storyman Vance Gerry.

Was Walt Disney a Racist?

In October 2020, Disney+, the streaming service owned by the Disney Company, added a content advisory to six of its older animated feature films. Among these films was “The Jungle Book” (1967), which has long been criticized for its supposedly racist depiction of primates living in a ruined temple who capture Mowgli and perform jazz. The supposedly offensive sequence involves orangutan King Louie and his entourage of various monkeys and apes, which are presumed to be degrading caricatures of black people. However, Louie was voiced by Louis Prima, an Italian American singer, using his signature style. In fact, the character’s face and expressions were loosely based on that Caucasian performer’s appearance, not that of an African-descended person.

In the present day “woke” culture, Walt Disney is frequently painted as a racist bigot. This interpretation of his character is largely based on racial stereotypes featured in classic Disney films. Rather than acknowledge that these were intended for comedy, not offense, the ultra-powerful Disney Company is eager to distance itself from its now controversial racial characterizations. It’s easiest to do so by blaming a long-dead individual rather than the company itself. However, is this based on facts about Mr. Disney’s actual life and character, or is it merely assumption on the part of overly-sensitive modern viewers?

Floyd Norman was the only non-Caucasian animator at Walt Disney Studios when he started working there. He was not, however, the only non-white employee. Besides the predictable jobs of janitor, etc., one black woman, Eunice, worked as Walt Disney’s private secretary, according to Norman. As a black man who worked side by side with Walt during the making of “The Jungle Book,” Floyd Norman is perhaps best qualified to answer the question of whether the Old Maestro was racist. During the interview, he stated, “Walt Disney didn’t care about skin color. He cared about talent. He treated everyone the same.” Floyd recalls that, although Walt was a very conservative man, his studio was very progressive in many ways. “You’ve got to give the old man credit,” he recalls. When asked to list some words that describe Walt, Floyd said, “Authenticity, genuine, sincerity. He was a good guy. He treated everyone with respect, and he expected the best from everyone. He was the best boss. I can’t think of a better person to have worked for.”

Fifty-five years after its original release, “The Jungle Book” is still a beloved entry in the Disney collection. Floyd Norman admits that he was surprised that it such a hit upon its original release, becoming Disney’s second highest-grossing animated film in the United States and Canada at the time. He is delighted that people still consider it a classic and love it so many years later. When he first saw the finished film at Grauman’s Chinese Theatre in 1967, he thought it was kind of corny, he chucklingly admitted, especially Baloo the Bear’s entrance singing “Do be do be do.” Apparently, Walt Disney was right when he said: “I am corny, you know? But I think there are just about 140 million people in this country who are just as corny as I am.”

Rather than be turned off by the Disney+ content advisory, I hope that the younger generation will watch and appreciate these films with honest, unbiased eyes. Floyd Norman’s eyewitness accounts of Walt Disney are clear proof of these films’ intents. If the Old Maestro didn’t care about skin color and treated everyone the same, how could he make movies that purposely ridiculed and belittled minorities. The spirit of cartoon is exaggeration, which you see in Old Disney’s depiction of every race, age group, and species. Maybe people need to lighten up and appreciate these films for what they were meant to be, fun entertainment for the whole family! If a black man like Floyd Norman helped create these characters and wasn’t offended, why should anyone else be?

Floyd Norman’s presentation before this film gave me a new appreciation for “The Jungle Book,” which is a masterpiece in a unique category. Seeing him live was an experience I’ll never forget. To recapture a bit of that magic, I recommend you watch “An Animated Life,” which I hope to do myself. This is a special movie, since it was the last movie in which Walt himself was an active creator. He died in December 1966, the same month the film wrapped, so he never saw the finished product. He worked on every aspect of the story board and the production, though, so we know he would have been pleased with the outcome. Floyd concluded his presentation, “I’m so honored to have been invited to the party, getting to work in the same room with Walt Disney.” No matter what his company does today, Walt’s is a legacy worth honoring.