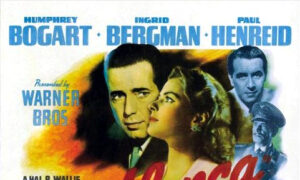 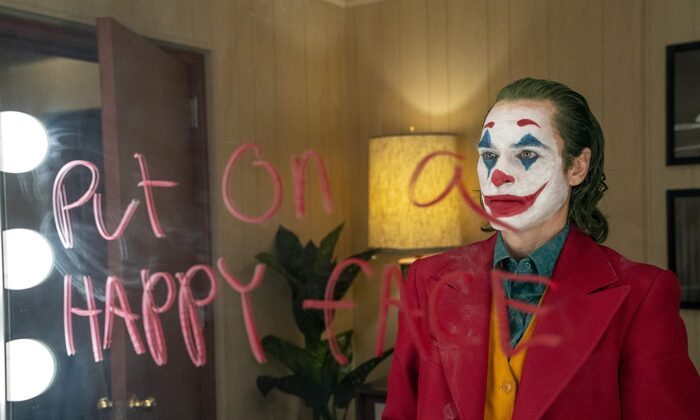 In September, Robbie Collin of the Telegraph asked Joaquin Phoenix a pointed question about his starring role in the then-upcoming film “Joker”: “Aren’t you worried that this film might perversely end up inspiring exactly the kind of people it’s about, with potentially tragic results?” In response, the actor muttered, “Why? Why would you …? No … no,” and then he stood up and walked out the door. After an hour-long conference with a PR agent, Phoenix returned to the interview and explained that he had “panicked … because the question genuinely hadn’t crossed his mind before.” However, the question had crossed thousands of minds leading up to the DC Films release.

On Oct. 4, Warner Bros. released its latest Batman-themed film, “Joker,” about the franchise’s villain, the “Clown Prince of Crime.” In it, Arthur Fleck (Joaquin Phoenix) is an unsuccessful comedian with a mental illness that makes him laugh uncontrollably. Eventually, Gotham City’s cruelty makes him go insane and become the murderous Joker.

This standalone film contains new concepts, as an IGN.com article suggests. The Joker’s facial coloring, for example, comes from makeup and dye, not from acid discoloration. His permanent smile is painted, not frozen by insanity or knife wounds. Although he commits a murder in a clown costume, and when pushed too far becomes the evil Joker, he is just an ordinary man.

If he is just an ordinary man, mightn’t a wider audience identify with him? That is, is “Joker” dangerous for society, or were the concerns around the movie unfounded?

On July 20, 2012, James Holmes, 24, entered the midnight premiere of “The Dark Knight Rises” at Century Aurora 16 Multiplex Theater in Colorado, wearing black protective gear, a gas mask, and bright orange hair. He opened fire, killing 12 people and injuring 70 others. Police apprehended him at his car, where, although some dispute this, he reportedly said that he was “The Joker.”

“Joker” has revived frightening memories. Sandy Phillips, whose daughter died in the Aurora shooting, told The Hollywood Reporter, “My worry is that one person who may be out there—and who knows if it is just one—who is on the edge, who is wanting to be a mass shooter, may be encouraged by this movie.” She added, “I don’t need to see a picture of Holmes; I just need to see a ‘Joker’ promo and I see a picture of the killer.”

Because of these concerns, five relatives of Aurora shooting victims penned a letter to Warner Bros on Sept. 24, asking the company to advocate gun control. Warner Bros. responded: “Neither the fictional character Joker, nor the film, is an endorsement of real-world violence of any kind. It is not the intention of the film, the filmmakers or the studio to hold this character up as a hero.” Director Todd Phillips said that “Joker” “makes statements about a lack of love, childhood trauma, lack of compassion in the world. I think people can handle that message.”

Despite denials that Fleck is a role model, many feared he could be perceived as a tragic hero. The greatest concern was that Fleck’s transformation to the Joker would inspire an incel mass shooting. “Incel” stands for “involuntary celibate,” an unattractive, romantically unsuccessful man. After the Venice Film Festival, Time Magazine called Phoenix’s Joker “the patron saint of incels” and said the film “lionizes and glamorizes” the “misunderstood savant,” who we are “supposed to think” is “kind of great.”

In recent years, inceldom has gone from an advice forum to a violent misogynist group. Since the online subculture breeds and praises killers, people have feared, as Vox states, that glorified incel Arthur Fleck could inspire real-life violence.

This isn’t the first Warner film to raise concerns by highlighting murder. In the early 1930s, people feared that gangster films would corrupt children. No crimes were directly linked to these violent films, yet criticism persisted.

In the early 1930s, gangster films seemed like a school for crime. From 1930 to 1933, America’s unemployment rate soared from 8.7 percent to 24.9 percent. Meanwhile, outlaws Bonnie and Clyde and John Dillinger became folk heroes for robbing banks. It wasn’t a wise time to glorify men whose reward for stealing, bootlegging, and killing was riches, power, and women, according to the book “The Dame in the Kimono.”

However, the films of the times did just that. Gangsters played by actors James Cagney, Edward G. Robinson, and Paul Muni made crime look so glamorous that it was worth early death. Mark Vieira, in his book “Sin in Soft Focus,” cites censor James Wingate as saying, “Children applaud the gang leader as a hero,” adding that they “see a gangster riding around in a Rolls-Royce and living in luxury, and even though some other gangster gets him in the end, the child unconsciously forms the idea that he will be smarter and get away with it.” Hollywood insisted the evil just provided contrast to decency, but crime seemed to overshadow punishment.

Anti-heroes date to Hollywood’s beginnings. From Western outlaws to the “Phantom of the Opera,” early films frequently sympathized with villains by showing their pathetic backgrounds. The Phantom, like earlier Joker incarnations, was a criminal because of his appearance. While we can pity phantoms, we can’t imitate them, since incidents of unusual misfortunes had corrupted them.

However, “Joker” turned this phantom into a gangster. While previous acid-induced disfigurements were unrelatable hardships, anyone could experience the unkindness and bullying that drives Arthur Fleck insane. While the story was meant to raise awareness about mental illness, it implies that anybody could be only one bad day away from becoming a homicidal maniac.

When no tragedy haunted the opening of “Joker,” earlier concerns were ridiculed. Twitter users who saw the film joked about not being shot. Memes depicted the media desperate for a tragedy to validate their predictions. And “Joker” was deemed a poignant, successful film.

Is this evaluation true? Since a crazed incel hasn’t shot up a screening, is “Joker” harmless? As radicalization expert Robert Evans explains, predictions of violence increased this movie’s security. A potential gunman would have to be completely insane, which most incels aren’t, to strike in such guarded areas.

This movie has subtler dangers. Jokes about shootings show how macabre and twisted our society has become. This insensitivity is not formed just from “Joker,” but from the thousands of similar films. Certainly, movies like this make you wonder: Would society improve if Hollywood ensured that right and wrong were always clear? When the lines blur, our youth get caught in the crosshairs.