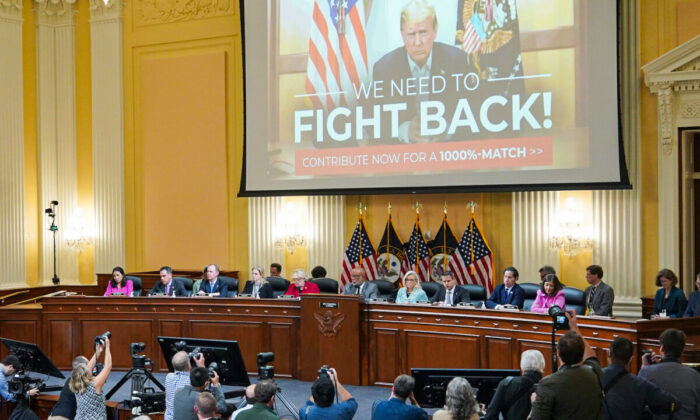 A video of former U.S. President Donald Trump is seen on a screen at the second hearing held by the Jan. 6 Committee on Capitol Hill in Washington on June 13, 2022. (Mandel Ngan/Getty Images)
Thinking About China

The Jan. 6 Committee Is After More Than Midterm Votes

November is just one part of the equation

Our current political landscape might be better summed up as a battle between those who constitute the Washington-ruling class establishment—including members of both parties—versus those who believe the purpose of government is to serve the interests of its citizenry. The conclusion subsequently changes: We know that they are malicious and power-hungry, and they think that we are just dumb.

There is no better example of this than the shameless utilization of the Jan. 6 Capitol riot as a tool to crush political opposition. The proceedings of the establishment uniparty congressional committee have proven as much. The “really chilling” proof of a “broad … extremely well organized” conspiracy that was promised by Rep. Liz Cheney (R-Wyo.) has yet to show up. But that was never really the point.

At the same time, the purpose is not just to galvanize voters for the upcoming midterm elections. Making Donald Trump and his supporters look bad to hurt his endorsed candidates is certainly a factor in the equation. By almost any metric, American social, political, and economic life has declined since Joe Biden took office. If establishment politicians don’t want to get crushed in November, deflecting blame is imperative.

Lawrence Summers, the former U.S. treasury secretary under Bill Clinton, perhaps had the most laughable recent example of playing the distraction game:

“The banana Republicans, who are saying that what happened on January 6th was nothing or okay, are undermining the basic credibility of our country’s institutions, and that in turn feeds through for inflation. Because if you can’t trust the country’s government, why would you trust its money.”

The Jan. 6 riot is not only a bludgeon to wield against Trump-adjacent politicians in the upcoming election, however. It is also a tool to keep the former president and his supporters from ever holding office again.

Those following the show trials will notice a concerted (and desperate) effort to prove that Trump has the power to call up a personal army. This fanatic base of support is answerable only to Trump and is simply waiting for his command to violently overthrow the institutions of democracy.

The initial hearing-turned primetime spectacle on June 9 set the pace to prove this false premise. The worst clips were selected from the Capitol protests and time stamped to suggest the unfolding of some carefully preplanned sinister conspiracy, all interspersed with video footage of Trump on Jan. 6.

At certain points, some of the more heinous moments of the rioting were presented with the overlay of out-of-context audio of Trump speaking, usually denying the legitimacy of the election. The suggestion is clear: the loyal minions were just dutifully following their leader’s orders.

Since Trump can’t be shown as explicitly calling for an attack on the Capitol, a more in-depth strategy must be shown to have taken place. The media loves the idea of secret right-wing dog whistles, so it would be no issue sticking to that script. However, that raises the question of who exactly was the intended Manchurian candidate for Trump’s crypto-signals?

Enter the Proud Boys and the Oath Keepers. Much of the commission’s hearings have focused on proving that these groups acted directly on Trump’s behalf. That is also why there has been such a heavy focus on the fact that his alleged claims of voter fraud had already been debunked, and the people around him were trying to dissuade him from sticking to the accusation of a “stolen election.”

Trump is pictured as a deranged madman trying to cling to the presidency: having lost support from those in his cabinet and even his family, he desperately turns to the militant vanguard of his supporters. Suppose it can be shown that Trump was calling on supposed “militia groups” to go to Washington and resist the transference of power. In that case, it becomes plausible that the president is responsible for anything those groups may have done or intended to do.

The committee has yet to reveal secret hidden correspondence worthy of sedition or an in-depth coordinated plan to overthrow the U.S. government. However, it has spent significant time crafting the illusion that racist, white supremacist groups (in reality, the Proud Boys and Oath Keepers are neither) act as Trump’s own Praetorian Guard.

Mere minutes into the first hearing, committee chairman Rep. Bennie Thompson (D-Miss.) told us about how the Jan. 6 riot was the moral equivalent of slavery and the Ku Klux Klan—just to make sure there were no misgivings as to what this was all really about. A black Capitol police officer was called to testify how Trump supporters hurled racist insults at him because he said he had voted for Biden.

Of all the body cam footage that was taken on that day, one wonders whether this was also captured. If it was, it is surprising that the committee does not have it running on video loop behind the entire hearing.

A constant focus on the ethereal concept of white supremacy means that political opposition can be castigated as racist, making it not only illegitimate but a threat. The fight to keep any supporters of the president out of office—increasingly, through whatever means necessary—subsequently becomes a moral duty.

As a side note, Thompson is also chair of the Homeland Security Committee. That means that the man who is clearly attempting to depict his political opposition (regardless of what party they are affiliated with, Liz Cheney and Adam Kinzinger are not his political opposition) as white supremacist-domestic terrorists, is also heading congressional oversight of security legislation and the Department of Homeland Security.

The June 9 hearings ended with members of the Proud Boys and the Oath Keepers on video saying that they had shown up in Washington largely because Trump had told them to, the implication being clear: they had stormed the Capitol because that is what they believed Trump was calling on them to do. This has also been a central focus of the subsequent commission hearings. The misrepresentation has the intended side-effect of poisoning the well of potential jurors for the defendants’ own day in court.

That could prove to be crucial for prosecutors, as a specific and rare legal definition must be met in order to convict on sedition charges. According to the standards of American justice, those prosecutors should still be facing an uphill battle against the Proud Boys and Oath Keepers currently in custody.

As stated by Julie Kelley at American Greatness:

“But the 32-page indictment [of Proud Boys for sedition] contained no new information aside from a few irrelevant details; much of it rehashed previous filings in the case. Nonetheless, Graves claimed the men conspired to ‘oppose the lawful transfer of presidential power by force, by opposing the authority of the Government of the United States and by preventing, hindering, or delaying by force the execution of the laws governing the transfer of powerful,’ referring to the 12th Amendment to the Constitution.”

However, if the odds can be stacked against the defendants beforehand, the likelihood of getting even just one conviction increases. The Sussmann case (among many others) clearly exhibited the fact that the Washington establishment is not afraid to play dirty. At least one of the Proud Boys awaiting trial has already requested that the sedition trial be moved out of Washington due to “prejudicial pretrial publicity.”

The Jan. 6 Committee has worked hard to show the Proud Boys and Oath Keepers were acting on behalf of orders from Trump. If a conviction does arise, then it becomes more feasible to say that Trump himself is guilty of sedition. Criminal charges against the former president then become plausible, and the Washington establishment gets that much closer to ensuring that Trump can never run for office again.