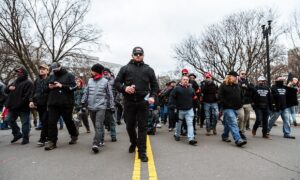 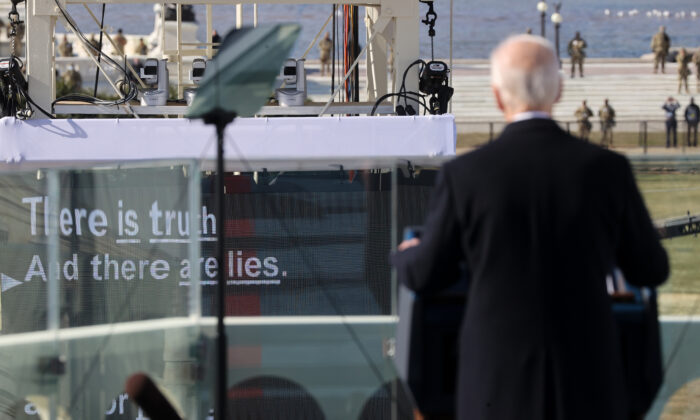 President Joe Biden delivers his inaugural speech after being sworn-in on the West Front of the U.S. Capitol in Washington on Jan. 20, 2021. (Jonathan Ernst/Pool/Getty Images)
Viewpoints

The Irony in Biden’s Call for Unity

The words “irony” and “ironic,” not to mention “ironically,” are often to be heard in the mouths of the media, but I don’t think many of those who use them really know what they mean.

At its most basic, irony is the process by which the meanings of words change, often to the opposite of their semantic meaning (when we call it “sarcasm”), according to the context in which they are used.

One of my favorite illustrations comes in Carol Reed’s 1940 film, “Night Train to Munich,” starring Rex Harrison as a sort of proto-James Bond, about derring-do behind enemy lines in Nazi Germany at the outbreak of war.

The movie includes a scene in which a Nazi guard is interrogating a man named Schwab: “It’s been reported to me that you’ve been heard expressing sentiments hostile to the fatherland,” says the guard. “I warn you, Schwab, this treasonable conduct will lead you to a concentration camp.”

“You were distinctly heard to remark: ‘This is a fine country to live in.’

“Oh, no sir,” replies the relieved Schwab. “There’s some mistake. I said, ‘This is a fine country to live in.’”

The guard appears to be taken aback. “Are you sure?” he asks.

“I see. Well, in future, don’t make remarks that can be taken in two ways.”

The guard doesn’t understand that we are all, constantly, whether we mean to or not, making remarks that can be taken in two (or more) ways. That’s why most of us learn very early on in life to rely on context, without even thinking about it, to make our meaning clear.

This context includes our emphasis, or lack of it, on key words (“This is a fine country …”) and body language or visual cues like a smile or a wink, but above all it depends on our knowledge of the person we are speaking to and his or her knowledge of us, derived from previous experience.

This is the thing that is obviously lacking between Schwab and the Nazi guard, though Schwab is taking the chance that the guard will be too stupid to understand his evasion—as, indeed, he turns out to be.

I apologize for this little lesson in the normal workings of social intercourse which most of us understand, and have understood since childhood, even if we don’t use the word “irony” to describe it. But I need to make the point that the media do not understand it.

Or they pretend not to understand it.

Or they think that you are too stupid, like that Nazi guard, to understand it.

Perhaps he has forgotten it. “Old men,” as Shakespeare’s Henry V says, “forget.”

At any rate, he had to have been sublimely unaware, while making his repeated appeals for “Unity” in his inaugural address, of the context in which those calls for unity would be heard by at least half the country.

What does it mean when someone who, since the confirmation hearings of Robert Bork more than 30 years ago, has been one of the most partisan politicians this side of Adam Schiff or Nancy Pelosi calls for national unity?

Can he have meant a unity that encompasses Hillary Clinton’s “basket of deplorables”? Or people who still support a man who, only days before, he himself was comparing to Nazi propagandist Josef Goebbels? A man who, as he also claimed again and again, had called Nazis “very fine people” and whom he has also called a stooge of Vladimir Putin and an illegitimate president?

Can he be talking of unity with the nearly half the country (including 30 per cent of Democrats) who believe that he himself is illegitimate, the beneficiary of a stolen election—people who, in the same speech, he dismissed as “extremists”?

Here’s what he said when he turned from mouthing pieties, said to have come from his heart and “my whole soul,” to address these so-called extremists directly.

“To all those who did not support us, let me say this: Hear me out as we move forward. Take a measure of me and my heart.

“And if you still disagree, so be it.

“That’s democracy. That’s America. The right to dissent peaceably, within the guardrails of our Republic, is perhaps our nation’s greatest strength.

“Yet hear me clearly: Disagreement must not lead to disunion.”

Newsflash, Joe. It already has led to disunion—largely on account of the burning hatred you and your party have constantly and without respite indulged yourselves in against President Trump for the last four years. How, now, do you propose to reunite with those whom you and your fellow NeverTrumpers have taught to hate you in return?

By telling them that they must either agree with you or shut up?

Among the speech’s 2394 words, including eight separate occurrences of “unity,” the word “reconciliation” does not appear once.

Unity, in other words, is only for those who have voted for or supported him or who are prepared to repudiate their support for his predecessor. Any coming together with Trump loyalists on some ground of compromise, some area of agreement, however small—the things that genuine unity, in a “democracy” (eleven occurrences), depends on—is not on the table.

The ceremony’s only hint at acknowledgment of any fault on his own side, let alone penitence for anything that he himself might have said or done (specifics unnecessary) tending towards disunity, came when Garth Brooks sang “Amazing Grace.”

Could the “wretch like me” saved by amazing grace have been Joe himself?

If so, it didn’t matter. Now that a wretch like him was saved, all the Trump-ite wretches still enmeshed in the toils of sin (as Joe sees it) could presumably go to the devil.

Most often the purpose of ironic speech is to make a joke, though as in the case of Schwab and the Nazi guard it may be an unintentional, even a potentially deadly one on the part of the speakers. In this sense, President Biden’s inaugural speech was a joke, though one that the media, apparently, didn’t even begin to “get.”

I wonder if it was intentional on Joe’s part?