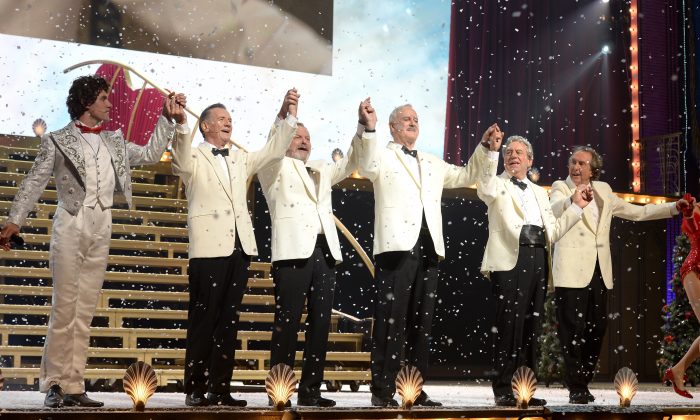 The Irony in a ‘Python’ Who Cancelled Himself

Irony is generally understood to be an incongruity between what might be expected to occur and what actually does.

For Simon Fraser University education philosopher Kieran Egan, irony is the final stage of a learning curve that takes us from infantile emotions through mythic narratives, romantic obsessions, and philosophical abstractions to a mature point when we finally understand that our assumptions don’t always line up with the truth.

Such may be the cognitive benchmark recently attained by the iconic British comedian John Cleese, famous for his role in creating “Monty Python’s Flying Circus,” which aired on the BBC between 1969 and 1974.

Early in November, The Telegraph reported that Cleese had pulled out of a Cambridge Union appearance, telling organizers to “find a venue where woke rules do not apply.”

According to The Telegraph, Cleese’s withdrawal came when Keir Bradwell, student president of the 200-year-old debating society, emailed Cambridge Union members to say he was setting up a blacklist of speakers that would include Andrew Graham-Dixon, a prominent British art historian and broadcaster who had given offense by doing a Nazi impersonation during a debate.

Graham-Dixon pointed out that his impression of Adolf Hitler intended to demonstrate that the Nazis had bad taste in art because they were racists. The historian asserted that “Mr. Bradwell’s implication that I am a racist and anti-Semitic by placing me on his list is utterly rejected and in the context surprising.” He went on to explain that “the speech I gave was a strident attack on Hitler’s racism and anti-Semitism.”

In a statement to The Jewish Chronicle, British historian Guy Walters said, “The idea that Andrew Graham-Dixon has been blacklisted for performing what was clearly a satirical impression of Adolf Hitler is both disgraceful and deeply ironic.”

Cleese had been scheduled to speak about a forthcoming television series on cancel culture. But when he heard Graham-Dixon had been blacklisted for doing a parody of Hitler, he recalled he had done the same. So, in classic Python style, Cleese cancelled himself.

Cleese implied that a choice to blacklist anyone derived from the stupidity of woke cancel culture. Under pressure, Bradwell eventually reversed his decision.

On this side of the Atlantic, popular comedians such as Bill Maher, Dave Chappelle, and several others are also beginning to question the vicious excesses of political correctness. In a recent interview with CNN’s Chris Cuomo, Maher said, “There’s a reason why the term ‘woke’ has come to signify going too far and doing things that don’t make sense.”

Even the generally progressive Netflix Inc. recently broke cadence with the left to produce “The Chair,” a production, which at least in part, pokes a little fun at the ludicrous dogmas of the woke mindset.

In “The Chair” professor Ji-Yoon Kim becomes the first woman of color to chair her college’s English Department. Kim’s paramour Bill, a member of the same department, incites indignation when he parodies a “Sieg Heil” during a lecture in which he clearly meant to mock Nazi Germany.

Like the Cambridge Union debate audience, Bill’s students were outraged. Like Graham-Dixon, Bill was cancelled. In the new despotism, filed with “critical theory,” “micro-aggressions,” and “trigger words,” actual intent has clearly become irrelevant.

The bitter irony in the blacklist affair is that Cleese himself is a product of Cambridge University. He was a particularly bright British public school boy who, in 1960, gained admission to study law at Cambridge.

During his years at Cambridge, Cleese honed his comedy skills at the famed “Footlights Dramatic Club.” At Footlights, he also met his future Python partner, the late Graham Chapman, who played the lead role in “Life of Brian,” the troupe’s 1979 spoof on Christianity.

From Counter-Culture to Cancel-Culture

Elite Anglo-American schools and universities have been known for producing some of the West’s leading counter-cultural activists.

From prominent Fabians such as Leonard Woolf and John Maynard Keynes to actual Soviet agents such as Guy Burgess and Anthony Blunt, the avant-garde at Cambridge were inextricably linked to the global left.

Given the progressive penchant to seek out “root causes,” it’s worth reflecting on the additional irony that the 1970s Python-mania and present-day woke culture have much in common. My own generation experienced both phenomena in a single lifetime. So, it’s fair to consider how one may have contributed to the other.

For the most part, the Pythons were upper middle class sons of professional parents. They came of age under the protective wing of a generation that had fought hard to survive depression and war.

They grew up attending posh schools in an era that had been made safe, free, and prosperous by the courage and sacrifice of those who had gone before them. In this context, the Python’s rebellion against British tradition and the American dream may have been as absurd as it was politically subversive.

Reminiscing about his childhood in the 2009 documentary “Monty Python: Almost the Truth,” Idle described his native England as an “unnecessarily uptight place.” When his father, who served in the Royal Air Force, died in a tragic, post-war car accident, Idle was enrolled in the prestigious Royal Wolverhampton School, from which he graduated with a scholarship to Cambridge. Looking back, he said his mother had “abandoned” him there. In the same documentary, Idle claimed to identify with the black slave movement in America while in school because he felt “oppressed.”

Gilliam, the American Python, was a legend in his own mind. He spent his formative years in Los Angeles, California, where he said he was shocked by “all this right-wing material.” He claimed that “anti-communism seemed to go hand in hand with racial discrimination.”

In 2003, Gilliam spoke with Salman Rushdie about the defining experiences of the sixties that had established his political views. “I became terrified,” he said, “that I was going to be a full-time, bomb-throwing terrorist if I stayed [in the United States] because it was the beginning of really bad times in America.”

Most comics consider it their duty to tear down anything vaguely understood to be “right of center.” The road from counter culture cleverness to advanced wokeness is paved with lofty intentions.

Python devotees fancied themselves to be insightful people. They rightfully vilified the memory of Hitler, but I don’t recall many gags about Joseph Stalin, Mao Tse Tung, Ho Chi Minh, Fidel Castro, or Pol Pot.

Within the familiar framework of neo-Marxist ideology, all sought to expose ignorance, greed, privilege, and discrimination in others. Cleese and the Pythons considered tearing down the stature of conservative political and religious figures to be a sociological triumph.

In pursuit of a progressive civilizational reset, the Pythons politicized humor as others on the left have politicized scholarship, education, art, literature, sport, science, medicine, religion, history, and justice.

Analyzing the Origins of Wokeness

Cleese is clearly an intelligent man. By all accounts, he could have excelled in the practice of law as readily as he did in comedy.

The 82-year-old actor is working on a television documentary that promises to examine the nature of woke culture. His forthcoming series, “John Cleese: Cancel Me” will seek to explore why the present “woke” generation is trying to reset the rules about what can and can’t be said.

Over the course of his inquiry, Cleese might be well-served to set aside a little time for introspection. History is replete with examples of political wit in cosmopolitan salons leading to reigns of terror in society.

Recent episodes of rioting, looting, arson, and random murder in American cities should remind us that fashionable passions always flow downward to those who are least able to control them. Intellectuals who set revolutionary fires in the minds of men might do well to consider the innocents who get burned.

Let’s hope that a hint of irony and the spirit of “mea culpa” might enter into Cleese’s search for the origins of woke cancel culture.