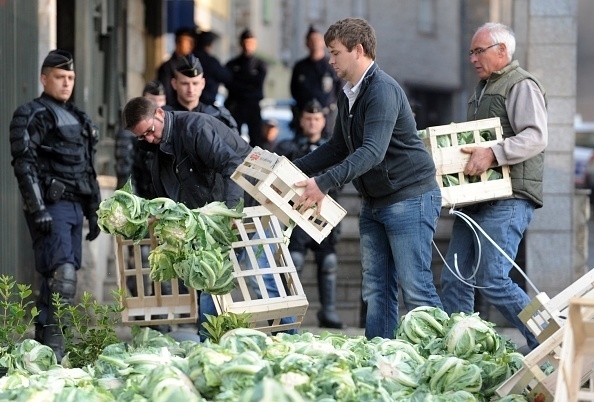 The Ire of Breton Vegetable Producers

PARIS, France—From 28 to 30 September, the Ministers of Agriculture of the European Union gathered for an informal meeting. Focussing on food security, this meeting was also an occasion to present the request of the French Minister of Agriculture, Stephane le Foll, to extend the list of products qualifying for support against the Russian embargo. More help from the EU, and a series of measures should compensate for the losses incurred by the Breton vegetable producers, without affecting the root of the problem.

Recently, violent protests and fires happened in Morlaix, a town in the Finistère department of Brittany in northwestern France, expressing a form of desperation from the farmers. Xavier Beulin, head of National Federation of Agriculture Workers’ Unions, explained that “this is the weight of the regulations, the weight of restrictions that is becoming unbearable for the producers.”  Indeed, the buildings aimed by the ire of the protesters, as well as the tax center or the agricultural social mutuality office in Morlaix, represent the threat that is hanging above the head of producers in an already unfavorable climate for the economical continuation of agricultural facilities.

The French government responded in three phases, in reaction to the despair of Breton cultivators that produce vegetables such as broccoli, artichokes, and cauliflower. The first phase consists of enlarging the eligible conditions that the European Union support against the Russian embargo. The second set of measures relates to the regulation of the market, like the withdrawal of goods,  the research of new markets and new customers, to ease the congestion of the market. Finally, financial support at short notice, by lessening social charges, and exemption of certain taxes. They should be applied from beginning of October. All these measures have the goal to appease the anger of the peasants, and the improvement of the situation in the context of the Common Agricultural Policy of the EU.

In 2013, the utilized agricultural area in France, mainly occupied by medium and large farms, has been the first to benefit from the help of the Common Agricultural Policy, with no less than 9,2 billion euros.  French farms, whose average size is around 100 hectares, and whose numbers have halved in 20 years, are facing a global market that fluctuates according to the geopolitical and climatic situations. Financial help allows to maintain competitive export prices, but excludes smaller farms with a more local reach.

According to the Institute of Health Surveillance, the agricultural profession is among the ones with the highest death rate by suicide, mainly for financial reasons. The suicide rate is proportional to the size of the farm. The bigger the exploitation, the greater the despair of the producer. Solutions exist with agricultural ecology and local markets, but these are not included in the outline of the agricultural economy that is increasingly facing a dead end.