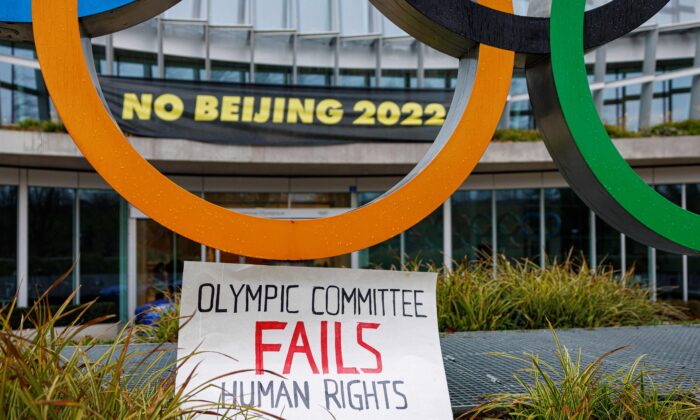 A placard is displayed at the entrance of the International Olympic Committee (IOC) headquarters during a demonstration of Tibetan activists from the Students for a Free Tibet association, in Lausanne, Switzerland, on Dec. 11, 2021. (Valentin Flauraud/AFP via Getty Images)
Thinking About China

Is the International Olympic Committee (IOC) a puppet, like the World Health Organization (WHO), that’s been bought and paid for by Beijing?

That would appear to be the case.

But how could that be?

After all, the Olympic Charter’s foundational values demand “respect for universal ethical principles.” This primary objective is supported by the IOC’s second principle, which is the “preservation of human dignity.”

Sounds quite lofty and decent, doesn’t it?

Plus, the IOC’s official stance is that it is only a sporting body that doesn’t get involved with politics.

But is that even possible with China?

There, the politics of the Chinese Communist Party (CCP) are at odds with human ethical principles and, in many cases, human survival. Of course, many regimes mistreat their people in terrible ways as a means of furthering their political objectives and survival. That’s not an overstatement, it’s just a fact.

IOC Has a Checkered Past

At best, the IOC has a checkered past in how it has dealt with oppressive governments.

The IOC had no problem, for example, with barring apartheid South Africa from competing in the Olympic Games from 1964 until the Barcelona Games in 1992. It was understood that some countries, because of how they treat their people, don’t deserve the international recognition, endorsement, and privilege of hosting the Olympic Games.

That brings us to the case of communist China. Why should the largest prison nation on the planet enjoy such an honor?

The CCP is indeed a cruel and inhumane political party with immense and virtually unchallenged power in China. It imprisons its people by the millions, uses them as live organ donors, slave labor, and worse—such as torturing, raping, and murdering them. No nation on Earth can compete with the CCP in those arenas.

And yet, by allowing the very same people to host the upcoming 2022 Winter Games, the IOC is, without reservation, endorsing all of these horrific human rights abuses by the CCP against the Chinese people.

Where or when, one may rightly wonder, does the IOC’s “respect for universal ethical principles” and the “preservation of human dignity” kick in?

How do they apply?

Surely not today. And surely not in China.

As Chinese tennis champion Peng Shuai could tell you, if she could be found, the IOC’s concerns for human dignity and universal ethical principles don’t really apply to real people, at least not those in China. Peng, you may recall, accused a former high-ranking CCP official of sexual assault. Days later, Peng was nowhere to be found.

The IOC and its president, Thomas Bach, have absolutely no qualms about supporting China’s state media efforts to assure the world and the World Tennis Association that Peng was “safe and well.” Bach’s collaboration with Chinese officials to validate a carefully planned video interview with Peng—along with Party officials to showcase just how well Peng was being treated—was as low as it was transparent.

Sadly, the IOC has not only failed to condemn the regime in Beijing for its ongoing atrocities, including the disappearance of Peng, but rather, the IOC and the CCP mutual admiration goes back at least several years.

In 2015, Bach cut a $1 billion deal with China’s e-commerce market leader Alibaba. “China and the IOC enjoy excellent relations and strong cooperation on many different levels,” Bach said at the time.

Many different levels, indeed. It’s worth noting that the IOC’s embrace of China and the CCP isn’t without precedent. In fact, the aforementioned South African example, perhaps, is the exception more than the rule.

The IOC had no problems with allowing Soviet Russia to host the 1980 Summer Games, even though Russia and its Soviet empire were responsible for the political oppression of millions of people across Eastern Europe, and the Soviet Army had just invaded Afghanistan.

Then there’s the Berlin Olympics of 1936 that was held in Nazi Germany. If Nazi Germany can host the Olympic Games, then why not Soviet Russia or communist China?

The Best IOC Money Can Buy

In fact, one could be forgiven for thinking that validating regimes that demean people’s humanity, destroy lives, and deny freedom and human decency to hundreds of millions is the IOC’s true primary principle, as well as its operating business strategy.

One could also surmise rather accurately that Bach is the best leader for the IOC that Chinese money can buy.

Unfortunately, the IOC has shown the world that it’s nothing more than a shill, which prefers that endorsements and willful moral blindness be paid for by blood money, and lots of it.

In the race to the bottom of the ethics barrel—or mountain, as the case may be—the IOC is certainly leading the way.