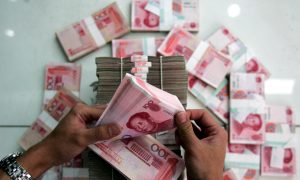 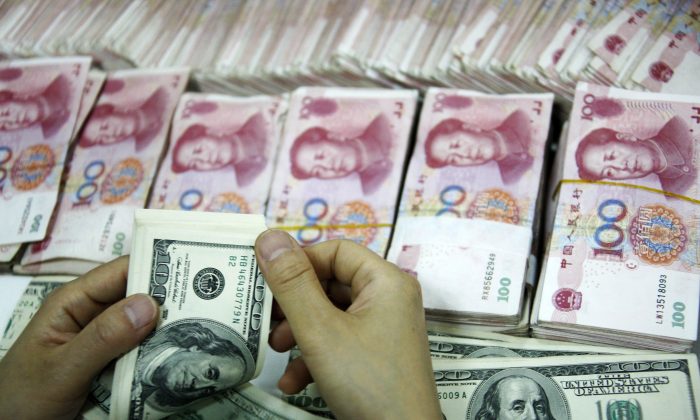 U.S. dollar notes are counted next to stacks of Chinese 100 yuan bank notes at a bank in Huaibei, in eastern China's Anhui Province, on Sept. 23, 2014. (STR/AFP/Getty Images)
Thinking About China

The Internationalization of Chinese Yuan Is Slow Going

China is now the world’s largest manufacturing producer, the largest exporter, and the second largest economy. And yet, the dollar, not the Chinese yuan, is the global currency of choice.

The U.S. dollar rose to prominence toward the end of World War II with the Bretton Woods Conference, which established the International Monetary System (IMS). The inauguration of the U.S. dollar as the global currency provided the United States with a number of advantages. Having U.S. government debt denoted in dollars, readily sold and held in reserve around the world, has meant that the U.S. government would never struggle to obtain financing. Additionally, with world trade conducted in U.S. dollars, the United States could avoid balance of payment issues and reduce currency fluctuation risk.

In 2015, the International Monetary Fund approved the addition of the Chinese yuan to the Special Drawing Rights Currency (SDR), used to supplement the reserves of member countries. This meant that the yuan had been added to a basket of currencies, alongside the U.S. dollar, euro, Japanese yen, and Great Britain pound. Theoretically, this single step should have secured the yuan’s place as a global currency, but somehow, international use of the yuan has remained minimal in comparison to the dollar.

Although China is the world’s largest trading country, with total trade valued at $429,619,611, the yuan accounts for only 1.88 percent of global payments. Among the foreign currencies held in the reserves of central banks around the world, the U.S. dollar accounts for 61.82 percent, while the yuan stands at only 1.95 percent. In terms of foreign currency exchange, the U.S. dollar is the most traded currency, while the yuan only ranks ninth.

The internationalizing of the yuan would mean a decrease in exchange rate risk for China in trade and investment. It would decrease transaction costs in cross-border trade, reduce the risk of exchange rate fluctuation, and increase the number and volume of yuan-denoted financial transactions. Being able to borrow in yuan and repay loans in yuan would also provide greater freedom and liquidity to Chinese firms and government entities. Furthermore, it would allow China to reduce its reliance on the U.S. dollar.

Currently, China can be subject to dollar shortages, needing hundreds of billions for settlement and debt repayment. Using the dollar forces China to operate in an international monetary system run by the United States, rather than one run by China. Due to the widespread use of the U.S. dollar, U.S. financial institutions take a leading role in global financial markets. If the yuan were an international currency, much of this business could be done by Chinese banks and financial institutions. In terms of national security, China would prefer that the United States not know or control any of its financial transactions.

The yields on U.S. treasury securities are not very high, compared to alternatives, but these securities are widely held by countries around the world because, in addition to being considered to have a very low chance of default, they are easily traded. As international transactions and trades are priced in dollars, dollars are useful. Conversely, if more international trade were conducted in yuan, it would be convenient for countries to hold a larger percentage of their reserves in yuan, which, again, would increase demand for the currency, increase its value, and further its internationalization.

From a public relations standpoint, having the yuan as an international currency would support China’s desired image as a global leader. In terms of geopolitical power, China would also be able to exert more influence and control over foreign countries, if those countries were dependent on Chinese yuan.

One of the steps China has taken to encourage internationalization of the yuan is the “one currency, two markets” strategy. This system allows the regime to maintain both an onshore and offshore yuan, with a firewall between. The offshore yuan is fully convertible, whereas the onshore yuan is only partially convertible. The onshore market, or CNY, has experienced some increase in flexibility, but it is still subject to tight controls by the central bank, which only allows it to trade within narrow bands. In the CNH, or offshore yuan market, by contrast, the central bank does not set the price and trade band. In spite of both markets trading essentially the same currency, price differentials can arise, depending on how actors in the two markets react to changes in economic or market conditions, or the behavior of other actors.

Research has found that fluctuations in both the onshore and offshore yuan have had significant impact on the currencies of Asia, particularly through the offshore yuan foreign exchange market in Hong Kong SAR. While this influence is growing, experts still believe that further increases in the importance of the yuan are dependent on currency liberalization within China.

It seems that the Chinese regime wants to retain strict controls at home, including control of the citizenry, the economy, and the currency, but also wants to benefit from participation in world markets. These two goals often come into conflict, as building the trust of foreign actors is dependent on the liberalization of financial markets, increasing economic freedoms, and exposing the country to market forces, all of which could result in better economic outcomes for China.

For the yuan to become a truly international currency, the Chinese regime would have to increase its free capital mobility, develop more liquid markets, liberalize interest and exchange rates, and increase people’s confidence in the currency. This means that Beijing has to be willing to release some of its controls on the currency and the economy. Additionally, the country will have to establish true checks and balances in its legal system and have real transparency. It remains to be seen if China is willing and able to do this.