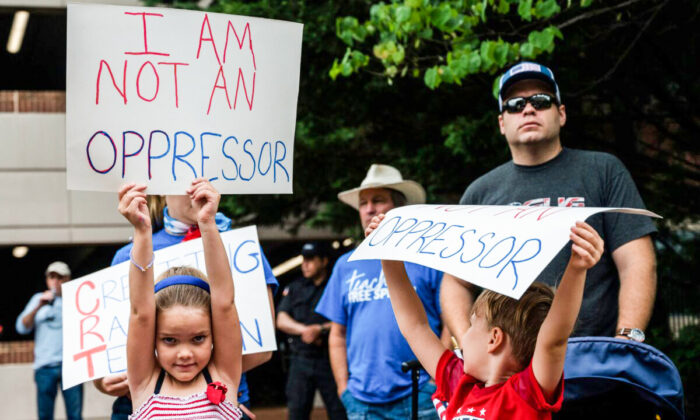 Children hold up signs during a rally against critical race theory being taught in schools at the Loudoun County Government Center in Leesburg, Va., on June 12, 2021. (Andrew Caballero-Reynolds/AFP via Getty Images)
Viewpoints

The Inhumanity of Critical Race Theory

A focus on race, relativism, and rigid groups minimizes the richness of human life and enlightenment

Karl Marx is long dead, and so, too, should be Marxism.

Marxist thought is alive and kicking in the twisted minds of critical race theory (CRT) professors, far-left think tanks, teachers, and teachers unions across the country.

It happens to ruin everything about life, by the way.

In the 20th century, arranging society around Marxist group identities proved disastrous for the Soviet Union and millions of people in Eastern Europe and Asia.

But with the triumph of the liberal Western order of democratic capitalism over communism in the 1990s, only the gentrified intelligentsia was still clinging to Marxism in the West.

However, the theater of the absurd has an unlimited run in some circles. The intellectual grandchild of Marxism is CRT and is playing at a school or university near you.

Critical theory, critical legal theory, and CRT were all created by Marxists to reinvent their argument, remain relevant, and pursue their goals of destroying the West. Of course, identity politics plays a big role in CRT.

Identity politics, in case you didn’t vote for Hillary Clinton, is based upon the debunked Marxist preference to define people by skin color, occupation, sex, and sexual orientation.

These are the factors that really make you who you are, it says. Your thoughts or deeds, generosity or accomplishments, or any other measure that requires individual effort, talent, dedication, and skills aren’t really yours or relevant to who you truly are.

Let’s see if these ideas match up with reality.

As the name implies, CRT makes absolutely everything about race. It’s the primary lens through which its adherents view the world, America, and people. It demonizes the Caucasian race, the Western capitalist liberal order, and, of course, Christianity.

Why does it do so?

According to CRT, all are tools of oppression used by the white Western power structure to keep nonwhite races down.

What does that mean in the real world?

For one, it means that the multitude of races and creeds I see at church are grossly misinformed, if not outright traitors to their respective peoples.

Somebody had better tell Barack Obama that even after two terms in the White House, he’s still oppressed. In fact, the oppression continues unabated, even as he is making tens of millions of dollars along the way.

It’s enough to drive a man to become a recluse in his $11.75 million mansion on 29 acres in Martha’s Vineyard, for crying out loud. Or even wallow in his three-acre oceanfront estate in Hawaii, replete with two custom pools and several loopholes that allow him to keep illegal seawalls separating his house from the Pacific Ocean.

What kind of society could inflict such a fate on a man?

CRT also has a strain of post-modernism running through it, asserting that there exists no objectivity in knowledge and, therefore, no absolute knowledge truly exists.

Accordingly, in the CRT world, one plus one equals … five? Sure, why not?

That’s a big problem, because reality is stubborn. Without objective knowledge, we have no science, no enlightenment, no modernity, and no morality.

Furthermore, without modernity, there’s no post-modernity and no CRT—one of life’s rich ironies.

As is hopefully evident, CRT’s very foundation is itself rife with contradictions and is completely bankrupt.

Where, pray tell, was CRT in, say, the 11th century? Was it in Europe or sub-Saharan Africa when there was much less interaction between civilizations?

What’s more, if race is the best way to view the world and its inequalities, why are there so many rich people and nations that are neither white nor, in some cases, Christian?

In South Korea, for example, people there enjoy one of the most advanced economies and the highest standard of living in the world.

How about Buddhist Japan? It enjoys an even better standard of living than South Korea.

Since its free-market reforms back in the mid-1970s, it has become the most successful nation in Latin America.

Was it race that led to Chile’s growth and prosperity?

And yet, according to CRT, viewing the world through race is the only valid way of understanding reality.

Ah, but where are the Marxist societies in this comparison?

Before China began to drink in the capital and technology of the West, it was a retrograde, bicycle-powered dictatorship beset by famine and deprivation.

And North Korea? No need for CRT there, is there? Of course, that country has lived in darkness for the past 70 years.

What about Cuba and Venezuela? They dwell in their own Marxist houses of corruption, want, and decay.

An Evil Way of Thinking

The truth is that CRT, at its core, promotes racial tribalism, one of the most base and reptilian modes of thought there is. Unfortunately, it’s a rabidly contagious mindset infecting our younger generation in schools and universities.

Imagine being told in your formative years that you can blame anyone or any outcome that you disagree with, or don’t like, on systemic racism?

Why strive to improve oneself, or try to do better, if you’re taught that the whole system is stacked against you, even if it isn’t?

And yet Marxist CRT proponents demand that we deconstruct America and the liberal Western order because our societies are, for the most part, more successful than those elsewhere.

A Return to Tribalism

If you want to divide a society, eliminate true critical thinking and destroy the standard of living for all but the highest level of CRT theorists, start seeing the world through race, and you’ll see the rapid and destructive return of tribalism.

That’s just the tip of the CRT iceberg. Cancel culture and the evisceration of our civil rights, such as free speech, are also under attack.

Make no mistake, destroying American society is the goal of CRT. But to do that, CRT must treat people in the most inhumane ways via identity politics and unprovable accusations of racism on both personal and institutional levels.

The best answer to CRT’s pathetic narrative is America itself, the land of many tribes, who then became one tribe. There’s no other country on Earth that offers more opportunity to anyone and everyone … even CRT advocates.