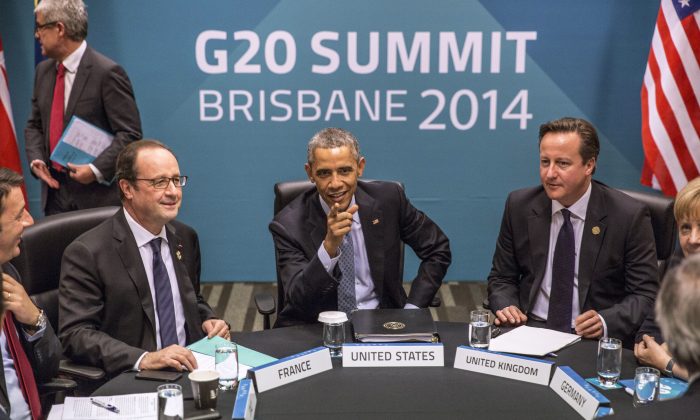 The Inequality Fallacy Behind the G20 Protests

For a mental image that instinctively breeds mistrust, imagine the twenty most powerful businessmen and women of a small town holding a behind-closed-doors meeting in order to facilitate better economic and political control over the already dominated population. Despite the professed altruism behind some of the closeted discussions, this scenario is an accurate microcosm for what the G20 represents at a global level—at least on face value. It is therefore unsurprising that the G20 attracts such visceral and persistent protests in response to its annual conventions. These protests will once again materialize at the end of this week, as the G20 convenes in Brisbane, Australia.

The central theme to the protests will be, as it has been historically, an opposition to the lack of transparency, the lack of democratic representation, the oligarchical control over international politics, and the plutocratic self-fulfillment of the member states. Based on the structure and nature of the G20, this represents a valid set of grievances. However, and similarly predictable based on recent history, the converging protest movements will undoubtedly attach themselves to the much repeated claim that increased rates of globalization, as a perceived by-product of these summits, produce ever-increasing levels of global economic inequality—thereby inflicting further suffering upon already impoverished societies. This is a statistical misunderstanding.

The first difficulty with this claim is conceptual. Ubiquitous now in casual discourse, the terms “globalization” and “inequality” tend to be internalized as singular, straight-forward principles—in reality they are far from it.

Distinct from internationalization, globalization is a relatively modern phenomenon. It is a term that encapsulates not just a multi-dimensional shrinking of the globe, but also a weakening of state authority, a predominance of the global market, the free flow of capital, a practical realization of theoretical liberalization; and the normative underpinning for a range of desires, attitudes, expectations, and trepidations.

Similarly, inequality can be a highly theoretical and non-tangible concept—understandable via a range of measurements and degrees. Popularly employed methodologies include: collating global income and assets at a purely individual level (judging global inequality in terms of a singular global statistical group, regardless of state boundaries). Alternatively, by measuring the representative income of states (in terms of GDP per capita). Or, by a comparison between the mean income of states (in terms of raw GDP figures).

Far from being frivolous, this terminological challenge is vital to understanding global trends. Yet, even if we defer to innate knowledge, and concede for the sake of expediency, that despite being unable to completely verbalize their specific meanings, “globalization” and “inequality” can still be conceptually grasped (thereby abandoning the problem before it has been resolved), the proposition that globalization produces economic inequality still has it all to prove.

To begin with a clearing of the data that seems to give credence to the claim: Globalization undoubtedly, though not in isolation, has contributed to the changing scope of global inequality. Without much variation between modeling and methods, inequality has steadily increased since the 1820s, and has then greatly intensified from the mid-1970s onwards—a spike that coincided with the rise of neoliberalism. As global exports and Foreign Direct Investment (FDI), as a percentage of GDP, increased, inequality increased in unison. For figures from 1960 onwards, the wealthiest one-fifth of the world’s states have seen their Gross National Product (GNP), as a share of the global pool, increase from 70 percent to 85 percent, while the poorest one-fifth have seen their GNP share decrease from 2.3 percent to 1.4 percent. To further support this trend, the Gini Coefficient as the World Bank’s adopted standard measurement for inequality, has been steadily increasing throughout this period.

On face value, this might seem conclusive. That is, globalization is only beneficial to the main cultivators of the phenomenon—the already wealthy countries. That despite Adam Smith predicting that a globalized environment would be essentially “win-win” (a system of “absolute advantage”), the only real advantage would be presented to those already equipped with sufficient wealth, resources and power to exploit the new environment.

With data that seemingly supports their preconceptions, the G20 protestors leave the argument at this point and begin placarding. They have however, and perhaps willfully, embraced a fallacy.

To begin with, it is important to note that international regimes such as the G20 do not in-and-of-themselves constitute globalization. They are merely reacting to a trend that would still be moving in their absence.

Furthermore, the data cited does not satisfactorily account for certain mitigating circumstances: the vast majority of political instability, collapsed states, internally displaced people, civil wars, and mass atrocities have occurred within the developing world. This has predictably damaged, and often reversed, growth and development irrespective of the forces of globalization. Similarly, the developing world has been witness to population growth well above the global average. Large population expansions naturally dilute statistical GDP per-capita.

Beyond this, there exists a more structural challenge and counterclaim. Rather than globalization increasing economic inequality, it has been the incomplete and restricted nature of globalization that has spurred this trend. A wholehearted embrace of globalization necessarily includes the free movement of labor. Such free migration would not only optimize production, but also equalize wages across the globe. Blocks of extreme wealth form, as they have done, only insofar as globalization exists as a restricted phenomenon.

India and China have epitomized this trend. India, in a variety of different capacities, had resisted globalization up until the late 1980s. As societal forces shifted, India compressively reversed its ideological stance, liberalizing its markets, pursing privatization, and buying into globalization. Once a stagnant economy, by 2000 India’s GDP per capita had more than doubled—an upward trend that continued thereafter. Ahead of India in terms of economic liberalization, during the same period Chinese incomes increased by 400 percent.

At this point it might seem like two separate discussions have taken place. One where inequality has increased, and one, for the same period, where inequality as decreased. The trouble is statistical:

The first set of data, and the understanding that inequality has increased, is fundamentally a comparison between the income of the poor with the assets of rich. Assets, regardless of the ownership, intrinsically produce wealth. To draw an accurate income comparison between states during the period of globalization, the data would need to be corrected by an approximate 20 times reduction in the existing asset-base of developed countries. Without this correction, global inequality misleadingly appears to have increased.

To explain this situation it is worthwhile drawing a comparison between the United States and China. For the period from 1980 to 2000, World Bank figures indicated an increase in the inequality-gap between the two countries based on Purchasing Power Parity (PPP) (China: $20,600, United States: $30,200 per capita). Yet the reason for this increase, was the already large divide that existed between the two countries. At the onset of this data, China’s standard of living was already 13 times less than that of the United States. From these disparate starting points, the Chinese economy would need to have grown by approximately 30 times that of the United States’ just to maintain this original gap. To simplify things, if economy “A” was valued at $10 and economy “B” valued at $130, then if both economy’s doubled in size to $20 and $260 respectively, then the inequality gap would have increased from $120 to $240, despite both economies having identical growth rates.

Inequality matters. It matters primarily because at the bottom end of its spectrum there exists extreme poverty on a scale so vast that it has been described by justice theorist Thomas Pogge as “a monumental crime against humanity.” According to World Bank data, 39.7 percent of all humanity are living in poverty (2.533 billion people), 830 million people are “chronically undernourished,” and 18 million people die each year due to poverty related-causes (one-third of all recorded human deaths). Since the end of the Cold War alone, vastly more people have died from hunger and related ailments than have died from all the wars, civil wars, genocides, mass atrocities and repressive governments throughout the entire 20th century (the most violent century on record).

Rather than exacerbating this problem, globalization, that is unrestricted globalization, offers a partial solution. The United Nations Conference on Trade and Development (UNCTAD) estimates that $700 billion in global trade is being lost each year through rich countries simply refusing to live up their internationally agreed obligations and open their markets to outside competition: an international environment whereby the powerful and wealthy protect their status by limiting opportunities and market-access to the weak and poor. As a correction to this, and similar situations, a truly globalized economic environment is a morally positive outcome.

The G20 is far from being an ideal organization. And its protesters have plenty to be concerned about. But the fear that globalization is increasing global economic inequality, and thereby harming the global poor, should not be one of these concerns.