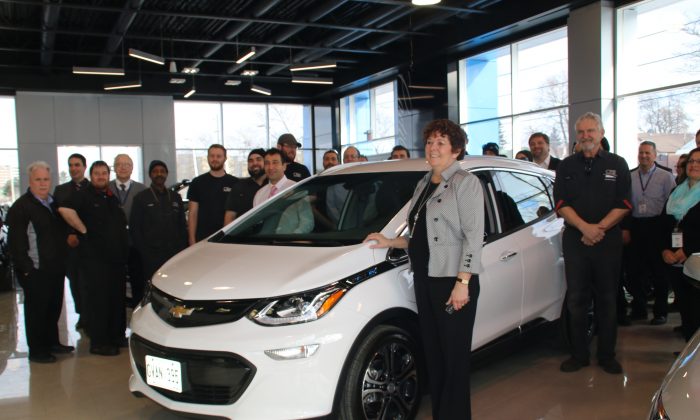 The Importance of the Chevrolet Bolt

Automotive engineers and designers the world over dig deeper for solutions to the issue of viable alternatives to the long-standing reliance for fossil-based fuels. Some companies continue to innovate, develop and introduce some limited options to a public that may not truly be aware of the necessity for change and innovation.

While, as noted, the continued reliance on the standard internal combustion engine (ICE) and to a degree, diesel-fuelled alternatives, “drives” the desire to move people and products around the globe in a relatively efficient manner—is it in fact, the most effective solution?

For all intent and purpose, fossil-based fuels are not an infinite source of energy and their reserves continue to be depleted at an alarming rate.

Over the years there have been many answers presented as solutions—from steam power to battery electric and yes, even hydrogen as a safe and relatively inexpensive resolution to this growing problem.

In most cases, it’s not the technology to develop vehicles that will respond to the alternative fuel question where there are issues—it’s infrastructure—or sadly, the lack, thereof.

As an Alternative, do EVs Make Sense?

Let’s focus on the electric solution. Is this a viable and cost effective answer?

Many automotive manufacturers around the world have been working on various forms of battery electric vehicles (BEVs), including hybrid and plug-in hybrid where EV power may be used to supplement an internal combustion engine.

Initially, those companies at the forefront designed vehicles that really stood out from the crowd that bore little resemblance to other products in their fleet. Some might argue that the people who purchased so-called green, eco-minded vehicles had a desire to be noticed as someone who embraced the notion of self-improvement and were doing their part to benefit the environment generally and the planet specifically. Early vehicles that fell into this category were Mitsubishi’s i-Miev, the Nissan Leaf, Honda’s Insight, BMW’s i3, and even the venerable Toyota Prius.

The dilemma continued to be range. If an owner had a 50-75 kilometre round trip daily commute, no problem. But undertaking a longer journey was and to a degree today, still is an issue.

Tesla really challenged convention when they began to produce cars which had a range in the hundreds of kilometres. It all came down to the size of and the storage capacity of batteries within the vehicles themselves. Teslas also looked downright sexy with more curb appeal than the vast majority of then available BEV solutions. They were also significantly more expensive, presented as a premium luxury mode of transport for those with deep pockets. Ever a company of innovation, Tesla even set up multiple rapid charging stations at key locations in urban centres. In other words, they took it upon themselves to provide their own, proprietary “refuelling” infrastructure.

A Top Tier OEM Rose to the Challenge

General Motors had been around the periphery of EV technology and had achieved much success with the Chevrolet Volt, especially the second generation version—an extended range car. Powered by both an electric motor and a gasoline-fuelled internal combustion engine, here was a more mass-produced car that was generally considered more affordable to eco-minded citizens who wanted to be a part of this new order.

But General Motors engineers were not satisfied with that.

There was, is an opportunity to produce an all BEV which would fulfil most consumers’ requirements and most important of all, eliminate range-anxiety. As a game-changing electric vehicle with a suggested range on a single charge of 383 kilometres, this five-door hatchback will likely further enhance Chevrolet’s position in Canada at least, of being the manufacturer who continues to sell the most EV-type vehicles. Eclipsing even Toyota, whom many associate more readily with being almost ubiquitous for eco-type cars.

Some months ago, Samantha Mesrobian, director, Corporate Social Responsibility at Scotiabank made the decision to buy a vehicle that reflected her corporate position as a vanguard of sustainability within the bank and signed up to purchase a 2017 Chevrolet Bolt EV. Ms. Mesrobian owned a late model Land Rover when she made the decision to literally put her money where her mouth (and job) was. With two older children, when the announcement was made within the Mesrobian household, there were no objections—more like huge grins and high-fives all round. This new vehicle would represent a major, yet welcome shift to the family’s lifestyle.

Long story short, City Buick Chevrolet Cadillac GMC was Ms. Mesrobian’s “home” dealer and in their showrooms, discussions and meetings occurred with Sevag “Sev” Dervichian, Vehicle Sales Manager who guided the family through the paperwork and provided more details on the vehicle itself. Remember, at that time, there was no inventory of production vehicles in stock. Ms. Mesrobian had, however, done her homework and was prepared to make the commitment. She was top of the wait list for the innovative, all-new, game-changing Bolt.

Moving along, some months later came the call from Mr. Dervichian. The delivery date was confirmed and Ms. Mesrobian would have her new EV the beginning of February.

That could not come soon enough and Chevrolet Canada decided that they would prepare a small “coming out” party for one of the very first Bolt customers in Toronto taking delivery of their brand new car.

It was quite the occasion. General Motors PR folks, manufacturer representatives—including Chevrolet Brand Manager Nicolas Longpre, in charge of, specifically, EV vehicles—and dealership employees were all caught up in the palpable excitement.

Meanwhile, Ms. Mesrobian and Mr. Dervichian were in his office taking care of the final paperwork—dotting the “i’s” and crossing the “t’s” so that she might get on her way with her new purchase and experience the delight and trepidation all owners of new automobiles go through. Given this was not a normal car, the whole process made things all the more interesting.

Imagine a vehicle that would never require regular fill ups of gasoline. Oil changes would soon be a distant memory.

Ms. Mesrobian had elected to buy the Bolt EV Premier—Chevrolet’s top of the line model. With a suggested retail price of $47,795, it is, especially for its size (after all, it is a five-door hatchback) an expensive proposition. Going green does, at present, have a premium price tag. However, in Ontario, the Provincial Government also provides an incentive under the Electric Vehicle Incentive Program of a maximum one-time payment of $14,000 for this model! These incentives vary and are likely available for a limited time. Check out http://www.mto.gov.on.ca/english/vehicles/electric/electric-vehicle-incentive-program.shtml for up-to-date information. These incentives and the range may entice buyers who may not have considered an EV before now. That and the reduction in overall cost of ownership.

Nicolas Longpre, Chevrolet brand manager out of General Motors head office in Oshawa was on hand to offer words of encouragement to Ms. Mesrobian and also to rally the troops before handing her the key fob to her new purchase. As an executive in charge of Chevrolet’s EVs and small crossovers in the Canadian marketplace, Mr. Longpre’s enthusiasm for the vehicle and the technology was evident from the get go. In a short but informative address, Mr. Longpre offered an overview of this car which has already picked up numerous accolades and awards from prominent organizations such as Car & Driver and recently claimed top bragging rights when voted as the North American Car of the Year and also Motor Trend Car of the Year.

Mr. Longpre also spoke about some of the features of this new addition to the Chevrolet fleet. The motor is capable of producing up to 266 lb.-ft. (360 Nm) of torque and 200 horsepower (150 kW) of motoring power. Combined with a 7.05:1 final drive ratio, that helps propel the Bolt EV from 0-96 km/h in less than seven seconds. OK, so not exactly performance car stats, but drivers may also choose from six different drive modes in this vehicle: and each caters to the operator’s comfort with so-called “one-pedal driving.”

What is “One-pedal Driving”?

Mr. Longpre extended an invitation to discover for ourselves what one-pedal driving meant when we took an available Bolt for a brief drive on city roads and highways. In essence, one-pedal driving means activation of the vehicle’s full regenerative braking powers. When taking your foot off the accelerator, the car will quickly come to halt without use of the brakes. Once a driver becomes comfortable with this system, it allows them to get the best economy the Bolt EV can offer. Otherwise, drivers can utilize the standard drive mode, which reacts like a regular vehicle would. Using the paddle on the left rear side of the steering wheel has a similar effect for power regeneration. It did not take too long to adjust driving habits to accommodate and take full advantage of the innovative engineering available.

The Bolt EV’s simple controls require no special training either. The 10.2-inch diagonal touchscreen and climate control buttons are easy to operate. After each trip, drivers can even use the screen to find out how economically they managed the vehicle through a colourful graphic interface.

The technology on board this car is intriguing—yet never feels unnecessary. No doubt Ms. Mesrobian will be discovering new things about her car as she goes about her daily commute and runs errands. One feature she will likely soon take for granted is the convenience of the Bluetooth connection. Once your smartphone has initially been paired to this vehicle, as long as Bluetooth is active on your device, a low energy signal will be picked up by this car as you approach and will seamlessly connect the device before you even sit behind the wheel!

In conclusion, whether the Bolt succeeds or not, industry watchers are quite bullish on electric cars—especially those few which offer extended range. To date, nearly every major automaker has made some commitment to developing electric vehicles, along with autonomous driving cars and ride-sharing services. In some cases out of fear being left behind as the future of mobility rapidly evolves.

The near future will determine if the Bolt and other models which will inevitably follow are up to the challenge.

Personally, I’m looking forward to some extended seat time in a Bolt in the very near future.