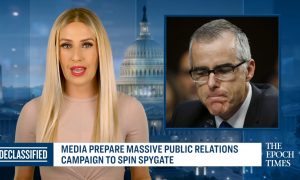 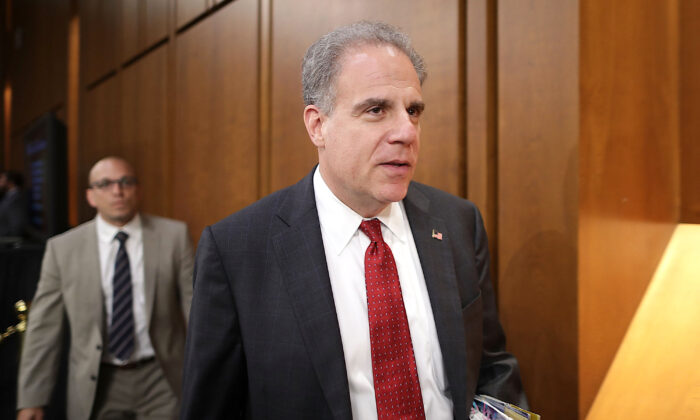 That report is currently undergoing classification review, after which it will be put into its final form and publicly released.

When that happens, the entire sordid truth about the 2016 election and its aftermath will be laid bare at last. The American public will finally see how federal officials—working in conjunction with allies in the news media—targeted Trump campaign personnel with investigations through the use of fake evidence being supplied by paid political operatives working for Hillary Clinton and the Democratic National Committee.

What Democrats and the fake news media at places such as CNN, The New York Times, and The Washington Post have snidely dismissed as “Russian propaganda” or a “wild conspiracy theory” is going to be demonstrated to be quite real through the exhaustive and meticulous case that Horowitz will lay out.

As the DOJ prepares this explosive report for public release, those opposing the president knew they needed something to counter the firestorm it will start.

They settled on an absurd complaint, filed by an anonymous leaker making vague allegations of crimes by President Donald Trump, related to a phone call he had with the president of Ukraine on July 25.

As I discussed in my last column, the transcript of the phone call doesn’t contain what the leaker claimed it did, and the complaint filed is rife with factual errors and contains no first-hand knowledge of anything it alleges.

The fact that they were forced to make this weak play to try to distract and defuse what is going to be an explosive inspector general report is very revealing.

However, this latest impeachment “inquiry,” based on the weak leaker complaint, isn’t real. House Speaker Nancy Pelosi (D-Calif.) would have to bring a resolution to the floor for a vote by the full House in order for a constitutional impeachment hearing to get underway.

As House Minority Whip Rep. Steve Scalise (R-La.) and others have frequently pointed out, Pelosi hasn’t done this. Instead of holding the required full House vote, Pelosi merely “endorsed” the “impeachment inquiry” that is being run jointly by the House Judiciary Committee, chaired by Rep. Jerrold Nadler (D-N.Y.), and the House Intelligence Committee, run by Rep. Adam Schiff (D-Calif.).

Why doesn’t Pelosi want to bring a resolution to hold an official, by-the-Constitution impeachment hearing to the House floor for a full vote? Because she knows exactly how such a vote would go.

In July, some rogue House Democrats insisted on bringing an impeachment resolution to the House floor for a vote. The full House vote was 332–95 to table the bill, effectively killing it, with 137 Democrats crossing the aisle to join 194 Republicans.

Make no mistake, despite all their tumult to the contrary, the Democrats in the House are very well aware that impeachment is an electoral loser. They blustered for months about impeachment, but when it came time to vote on the House floor, they had to show their hand.

Pelosi knows very well what would happen if this latest round of impeachment theater is put to the test with a full House vote. Her caucus is divided and many House members would lose their seats if they followed through on this.

Also, let’s recall that Schiff just spent more than two years pulling the “I have evidence! Mountains and mountains of evidence!” act with the Trump–Russia collusion hoax. How many people will believe Schiff all over again with this new and even weaker Trump–Ukraine bluff?

Yet we are all watching supposed journalists eagerly lining up to sell this stupid bluff to the public.

Although Schiff has refused to address this, the letter from the anonymous leaker, whom the media insists on calling a “whistleblower,” is dated Aug. 12. That means it’s possible that Schiff had the filed complaint in mid-August and sat on it. Townhall columnist Katie Pavlich was one of the first to call attention to this in a column entitled, “Adam Schiff Received the Whistleblower Complaint a Month Ago and Didn’t Report It Until Now, Why?”

Schiff knew this politically motivated complaint was filled with second- and third-hand hearsay, and even cited news media reports as “evidence” for its claims. The leaker repeatedly admits to having no direct first-hand knowledge and is merely passing on what was heard from others, who are also anonymous.

Because Schiff knew what weak tea this complaint was, I believe he didn’t make it public until there was simply no other option left, no other card that could be played to keep the Democrats’ impeachment theater going, especially in light of the fact that Horowitz’s FISC abuse report is going to be released any day now.

Once again, the Democrats are trying a desperate Hail Mary play with three seconds left on the clock in a fight they are losing, and losing quite badly.

If you’ll recall, they used this futile Hail Mary strategy during Supreme Court Justice Brett Kavanaugh’s confirmation hearings, when Sen. Diane Feinstein (D-Calif.) held back Christine Blasey Ford’s letter for months, waiting until every other method to halt Kavanaugh’s march to the court had been exhausted before finally making the letter public.

Like the Blasey Ford gambit of accusing Kavanaugh of a sexual assault at the 11th hour to prevent a conservative justice from taking a seat on the Supreme Court, they are now forced into a desperation play, where they take an absurd complaint from a politically motivated anonymous leaker and try to use it as a pretext to begin bluffing impeachment of this president.

The Democratic Party did massive damage to itself over the Kavanaugh shenanigans, and the price for this latest self-inflicted fiasco shall also be quite high, in my opinion.