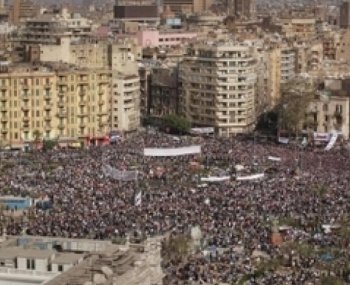 The Impact of Egyptian Uprising on China

Xia Xiaoqiang
biggersmaller
Print
People are wondering why Chinese people can't do what Arabs are doing.

The “Jasmine Revolution”, a popular uprising in Tunisia that toppled the regime of former dictator Ben Ali in January, has caused a ripple effect in many Arab countries. People in Egypt, Yemen, Algeria, Jordan, and elsewhere have taken to the streets to protest against the political rule, government corruption, high unemployment, and to demand change.

For the last two weeks, despite a massive police presence and government warnings of a crack down, thousands of Egyptians have flooded the streets in Cairo, Suez, and Alexandria every day. Inspired by the uprising in Tunisia, they too are demanding political reform and have called for President Mubarak to leave the country.

Following the Egyptian uprising, hundreds of thousands of antigovernment protesters flooded the streets in cities throughout Yemen on Feb. 2 and 3, shouting "No to corruption, no to dictatorship!" and demanded an end to President Saleh’s 32-year grip on power.

In Syria opposition groups are saying they too are planning their own “Day of Rage” in protest of President Bashar al-Assad’s dictatorial rule.

On the other side of the world, many netizens in China, despite media censorship, are paying close attention to what is going on in Egypt. They are interested about the impact all of this could have on China.

China’s mainstream media has been very low key with its reporting on the Egypt protests. Xinhua’s reports avoided mentioning the latest news of the public protests. It did not report that Egyptians demanded that the president step down, nor did it mention the friendly interactions between solders in tanks and protesters in the streets of Cairo.

According to nonofficial websites, the State Council Information Office and the Ministry of Public Security jointly issued a notice that requires all media to use only Xinhua reports and not use translations of foreign reports. The notice also ordered all websites to “strengthen management” of their forums and blogs, especially microblogs. Violation of the directive would result in website closure, it said.

It is the communist party’s Central Propaganda Department that controls Chinese media. What are they afraid of?

A Jan. 20 report by The Epoch Times pointed out the many similarities between Tunisian and Chinese societies, such as great disparities between rich and poor, soaring food prices, high unemployment, government corruption, an entrenched political dictatorship, and serious social turmoil.

Actually, all the Arab countries that are now going through uprisings share these conditions. The article also quoted several experts who thought that a similar outcome for China is a possibility.

When a country, especially a totalitarian dictatorship country, faces a large public protest that might cause a big political change, the military often plays an important role in the final outcome.

Let’s look at what Egypt’s military chose. Egypt’s military on Jan. 31 promised not to fire on peaceful protesters. In fact, the soldiers that entered Cairo had already stood on the side of the people before the military released the official statement.

An Associated Press reporter at the scene said a police officer who had taken off his uniform to join the protest, was being carried on the shoulders of cheering protesters. This was a memorable scene not seen in Egypt for 30 years.

If Chinese soldiers had been able to see what was happening in Egypt, they would certainly be shocked and affected by it. As a result, they might very likely also choose to turn their guns away from Chinese people, and thus the CCP would lose control of the military. This would at once end the CCP’s ruthless history of violence against the Chinese people. The Chinese military might change from protecting the CCP to defending its homeland and the people.

Chinese authorities have made every effort to downplay and erase people’s memory of the 1989 Tiananmen Square massacre. At the same time, they are constantly deepening people’s fear of the regime through the use of terror and bullets in localized conflicts.

However, the rapid development of the Internet and anti-filtering software developed overseas is helping more and more Chinese people to obtain uncensored information. The repressed wish for freedom has likewise become stronger and stronger.

In a thoughtful Feb. 1 commentary called “The Quest for Dignity,” David Brooks of the New York Times (NYT) talked about the great trend and tide that began sweeping across the world around 50 years ago, with people having different expectations of how they should be treated, and “they began to march for responsive government and democracy.”

“More than 100 nations have seen democratic uprisings over the past few decades. More than 85 authoritarian governments have fallen. Somewhere around 62 countries have become democracies, loosely defined,” the NYT article says.

It also says that the experiences have taught us a few lessons, one of which is that “autocracies are more fragile than any other form of government, by far … [and] for all the pessimism and nervousness that accompanies change, most countries that have experienced uprisings end up better off.”

If every Chinese were to cast off his fears, this “Jasmine Revolution” could usher in a “New Spring” for China.