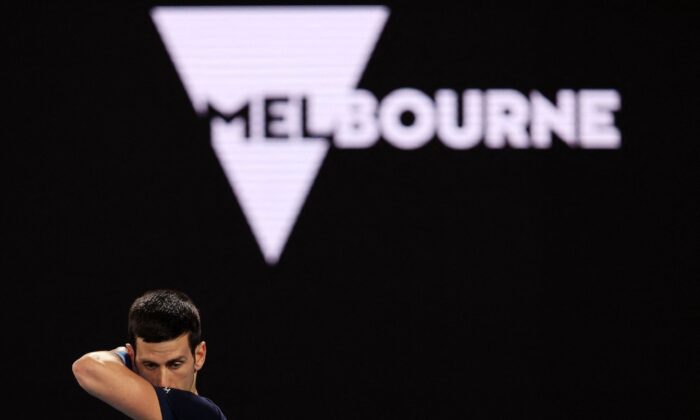 Novak Djokovic of Serbia attends a practice session ahead of the Australian Open tennis tournament in Melbourne, Australia, on Jan. 14, 2022. (Martin Keep / AFP via Getty Images)

The Australian Immigration Minister, Alex Hawke, in a much-anticipated decision, cancelled Novak Djokovic’s visa on Friday, January 14, 2022, a few minutes before 6 p.m. The Minister stated that he exercised his power “under section 133C (3) of the Migration Act to cancel the visa … on health and good order grounds, on the basis that it was in the public interest to do so.”

The Minister’s decision sent ripples through the international media and triggered Djokovic’s urgent request to be granted an injunction to prevent his deportation, enabling him to play in the Australian Open.

Although online polling suggests that 82 percent of people approve of the Minister’s decision, the cancellation of Djokovic’s visa is not greeted with universal approval. For example, Rebecca Weisser, in an article published prior to the cancellation, opined that “the absurdity of denying the world’s number one tennis player the right to compete in the Australian Open is matched only by Australia’s illogical and draconian Covid regulations” and that “Prime Minister Scott Morrison should show some Christian charity towards Djokovic, accept his apology for any mistakes in his visa application and allow him to do what he does best—play wonderful tennis.”

However, Weisser’s statement conflates two issues. The first issue relates to the question as to whether an unvaccinated person should be allowed to enter Australia, quarantine-free, for the purpose of playing in the Australian Open, and second, whether Australia’s complex COVID-19 visa rules should be respected regardless of how convoluted and illogical they might be.

Indeed, it is perfectly conceivable to oppose compulsory vaccination and accept that violations of Australia’s visa rules justify the cancellation of Djokovic’s visa.

With regards to the first issue, Djokovic’s mother showed her frustration when, in a press conference, she demanded to know why Australians are upset that her champion tennis son opposes vaccination. She pointed out that Djokovic is a man in his mid-thirties who should be allowed to make his own decisions. Her plea suggests that the unvaccinated should be allowed to play in the Australian Open, and that compulsory vaccination constitutes a violation of a person’s rights, protected by the Australian Constitution and relevant international instruments.

The right of people to remain unvaccinated is discussed in a recently published book titled, “Emergency Powers, COVID-19 Restrictions & Mandatory Vaccination: A ‘Rule of Law’ Perspective.” The authors of the book argue that vaccine mandates facilitate the development of an unequal society where the unvaccinated become second-class citizens, excluded from most activities of daily life. The book details the devastating consequences of Australia becoming an illiberal country.

Although the Immigration Minister excruciatingly delayed a decision on Djokovic’s visa, he finally made his decision which, considering the circumstances of the case, is the right decision. What started as a bumbling border operation, which deprived Djokovic of sufficient time to provide information to the authorities, soon escalated into a real saga, which captivated the prurient imagination of the international press and cast Australia in a negative light.

Djokovic’s exemption application was granted on the ground that he received a positive COVID-19 virus test on Dec. 16, 2021 but failed to isolate as required by the Serbian authorities. However, Djokovic claimed in an Instagram post that he had no idea he had contracted the virus when afterwards he participated in various activities, handing out awards to young tennis players. He also gave an interview to a French paper, L’Equipe, when he was already aware of his infection and failed to disclose it to the interviewer.

The plot thickened when it was revealed that he wrongly answered a question on his Travel Declaration form, which asked whether he had travelled to another country during the fourteen days before coming to Australia. He ticked the “no” box, but it has since been revealed, and acknowledged by Djokovic himself, that he travelled to Spain, where he trained in Marbella to prepare for the Australian Open.

There are exorbitant fines, even imprisonment, for making a false declaration. Djokovic has since apologised for the error, claiming that this is nothing else but a “human error” and that, in any event, an agent had completed the form on his behalf. In doing so, he attributes blame to a third party, instead of taking responsibility himself for this false declaration.

Then, Der Spiegel, a respected German magazine, claimed that the results of his COVID-19 test may have been manipulated because there appears to be a problem with the digital dates of the test results, which suggest that a negative test was obtained before a positive result was recorded. Djokovic relied on the positive test to gain a medical exemption to enter Australia.

The veracity of the Der Spiegel story has not been confirmed. He is now being investigated in Serbia for violating COVID-19 isolation requirements following a positive test.

The Djokovic team also claimed that he had a diplomatic passport which allows him to stay in Australia. However, the website of the Department of Foreign Affairs and Trade indicates that possession of such a passport does not insulate a person from the COVID-19 regulations.

The Minister of Immigration, relying on extensive internal and external legal advice, has now decided to cancel Djokovic’s visa.

Although the unrelenting penalisation of the unvaccinated is a gross violation of people’s human rights and a deplorable development in Australian politics, there are visa rules and, in this case, there are sufficient reasons to conclude they have been violated or treated with benign neglect.

Sections of the Australian polity may well be strongly opposed to the development of Australia as a two-tier society, where the concept of equality is but a distant reminder of the past. However, the visa rules, illogical and disproportionate they may be, are not egregious violations of the rule of law, provided they are properly publicised, and their implementation does not accord preferential treatment to members of the privileged class.

If Australians are expected to abide by these rules on pain of severe penalties—as has been observed on many occasions—which are brutally enforced by politicised police forces, foreign visitors also need to obey these rules even if they are inconvenient and moronic.

The Djokovic saga is unfinished business. His legal team sought, and received, an injunction to enable his case to be heard in the Federal Court of Australia. This Court has now scheduled a substantive hearing which will be held in the morning of Sunday, Jan. 16—less than 24 hours before the start of the Australian Open—before Justice David O’Callaghan. Perhaps Djokovic will have yet another devastating serve on his racquet?

Djokovic’s legal action, fuelled by a litigious propensity and aimed at overturning the cancellation of his visa, will cause irreparable harm to Australia and the Australian Open. The future will reveal the extent of the impact of this saga on the reputation of the iconic tennis tournament, the players, and the organisers.

It would be sad if COVID-19 had the unintended effect of destroying what is universally regarded as an exciting crowd stopper and glorious sporting event.