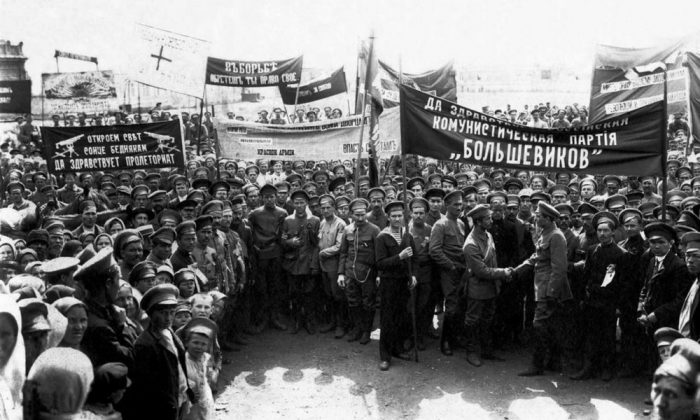 The Horrors of ‘War Communism’

Before the communist takeover in the 1917 October Revolution and the ensuing civil war (1917–1922), Russia’s economy was the fifth-largest in the world and the nation was steadily modernizing.

The All-Russian Communist Party (the Bolsheviks), however, envisioned a new social order that would “liberate” the downtrodden masses from oppression, in accordance with the ideas of Marxism. Upon seizing power in major Russian cities, Bolshevik leader Vladimir Lenin decided to “begin without transition to build up socialism” while battling the anti-communist White Army and uncooperative fellow leftists.

Instead, Lenin’s communist policies rapidly brought down production, causing a deadly famine that claimed the lives of millions and accompanied the Soviet regime’s descent into absolute dictatorship.

By 1921, the destruction and embarrassment were so great that Lenin was compelled to retroactively coin the term “War Communism” as a way to justify a temporary return to market principles under the subsequent “New Economic Policy.”

Directly after the 1917 revolution, the Bolsheviks seized all real estate not held by farmers, and canceled all government debt. The old organization of factory labor was abandoned in the name of self-organization. Revolutionary officials who lacked basic knowledge of economic principles even ordered that Russia abolish its currency.

The Bolsheviks intended for their policies to institute a fully communist economy from the beginning of their rule, not as an emergency measure to win the Russian Civil War as the name “War Communism” would later suggest. But the laws of economics and engineering, derided as the shackles of an oppressive past, didn’t budge. According to Richard Pipes, the distinguished scholar on Russian and Soviet history, the attempt to construct a communist society as rapidly as possible “left Russia’s economy in shambles.”

With market incentives now made illegal, in 1920 and 1921 heavy industry had fallen to one-fifth of its 1913 output, and worker productivity had shrunk to one-fourth. Agricultural production decreased to the point where 70 percent of the St. Petersburg population fled to the countryside to forage for food. Half of all Muscovites did the same.

The Kremlin responded by effectively press-ganging all factory workers under unions controlled by the Communist Party. All citizens between 16 and 50 were drafted for compulsory labor.

In mid-1918, shortly after the Bolsheviks had taken control of major Russian cities and before much combat had broken out in the civil war, chaos reigned. As part of early moves against rural Russia, the Soviet regime classified well-to-do peasants as “kulaks,” or miserly capitalists. The Bolsheviks organized workers to lead “poor peasants” in a violent economic struggle against ordinary civilians that would kill over 6 million people through starvation and disease.

While the Bolsheviks controlled the great industrial centers and railways, giving them an edge over the White Army, perhaps the greater enemies during and after the Russian Civil War were the farmers who resisted Lenin’s policies.

The Soviets regarded the Russian peasantry with great disdain, as they did not support the Bolsheviks in the initial revolutions of 1917 and the 1918 parliamentary elections. Lenin called them “petty bourgeois proprietors” who had helped overthrow large landowners and capitalists but would have to be put down in the “most decisive, ruthless struggle.”

In 1920, drought and chaos from the war, combined with the Bolsheviks’ forced collectivization program and persecution of the kulaks, created a period of massive starvation throughout Russia, affecting around 25 million people.

As Pipes wrote: “Long experience taught the muzhik [name for the Russian peasant man] to cope with natural disasters by setting aside sufficient reserves to carry him through a year or even two of bad crops. Normally, crop failures spelled hunger rather than starvation. … It took three years of remorseless, methodical ruination of agriculture by the Bolsheviks to acquaint Russia with famine in which people died by the millions.”

A Russian peasant saying at the time went “bad crops are from God, hunger comes from men.”

The Bolsheviks’ response to the crisis can be unfavorably compared with how the former czarist government had handled famine. In 1891, 12.5 million Russians were affected by famine, but the authorities were well-prepared for the disaster and quickly distributed food to 11 million people. Less than half a million perished—13 times less than the 6.5 million who starved to death under Lenin, according to Pipes.

As the famine occurred in regions usually thought of as Russia’s great breadbaskets—such as the Volga area and the Ukraine—the Soviets could not excuse the disaster by blaming White forces or the so-called kulaks.

The Bolshevik regime censored all news of the famine and purchased food from abroad to keep the cities fed, and that was all. Pipes notes that in “none of Lenin’s writings or speeches of that period can one find one word of sympathy” for the starving peasantry.

But while Lenin did little to support the dying, he did note in writing how the famine helped Bolshevik rule—the population was now too weak to stage a revolt. “The Black Book of Communism,” published by Harvard University Press, records how a friend of Lenin recalled he “had the courage to come out and say openly that famine would have numerous positive results.”

Lenin also thought that the suffering would better divorce rural Russia from the Christian faith. “Famine would also destroy faith not only in the tsar,” the Bolshevik leader added, “but in God too.”

Only in July 1921 did the regime acknowledge that a terrible tragedy was underway. The Kremlin mobilized a body of public figures, headed by Soviet propagandist Maxim Gorky, who wrote an urgent appeal to Herbert Hoover, then the U.S. secretary of commerce.

Despite Hoover’s deep-seated opposition to communism, he directed the American Relief Administration (ARA) to deliver millions of tons of food and medicine to the Soviet Union. By mid-1922, the famine was over.

Lenin had wanted to control the ARA’s efforts directly and subject administration staff to Soviet law, but was forced to agree to Hoover’s terms. In notes for a Politburo meeting, the Bolshevik leader seethingly declared that “the baseness of America, Hoover, and the League of Nations is rare.”

“War Communism” was an apt description of early Soviet policy, in that the Bolsheviks brutalized their own compatriots. As the communists steadily battled and overcame armed resistance from the White Army and others, Lenin and his supporters buttressed their economic despotism with suppression of all internal dissent—the infamous Red Terror.