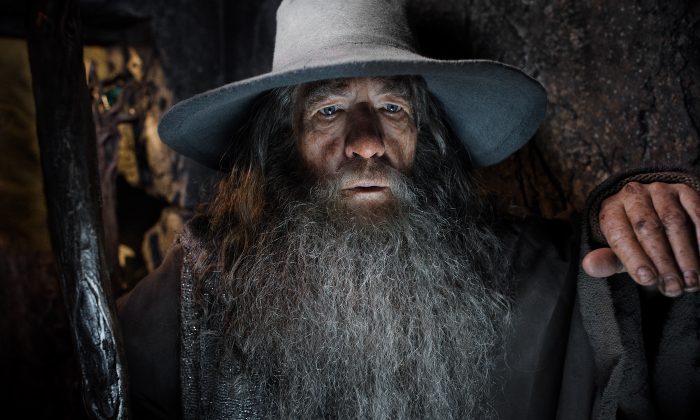 The teaser trailer for “The Hobbit: Battle of the Five Armies” was released recently, and it was retweeted by Gandalf actor Ian McKellen.

Richard Armitage’s Thorin asks Bilbo: “Will you follow me one last time?”

The third installment of the trilogy will come out Dec. 17.

The trailer was released at Comic-Con in San Diego first.

SAN DIEGO (AP) — “The Hobbit: The Battle of the Five Armies” launched a full-scale assault on Comic-Con.

The cast and crew from the final installment of “The Hobbit” trilogy showed off the first trailer for the fantasy film at the pop-culture convention, as well as a blooper reel from both “The Lord of the Rings” and “TheHobbit” movies.

Stephen Colbert, dressed as the shaggy-haired character he cameoed as in “The Hobbit,” enthusiastically moderated Friday’s panel at the San Diego Convention Center.

The trailer conjured up for the audience of 6,500 attendees gathered inside Hall H showed the dragon Smaug setting Lake-town ablaze, Cate Blanchett’s royal elf Galadriel kissing the forehead of Ian McKellen’s beleaguered wizard Gandalf and legions of elves and orcs racing into battle.

“That was really just for you, Stephen,” filmmaker Peter Jackson said to the talk show host and J.R.R. Tolkien super-fan. “I mean, these other people are here, as well.”

They were also joined by Benedict Cumberbatch and Andy Serkis, who portray the computer-generated Smaug and Gollum. Both actors imitated their fantastical characters when pressed by fans. When asked where he’d like Gollum to visit, Serkis joked “backstage with Stephen Colbert to see what he’s got inside his costume, precious.”

At the start of the panel, Colbert introduced a lengthy blooper reel that highlighted several funny moments left on the cutting room floor during the 13-year history of the films. The bloopers mostly featured McKellen riffing on other actors, flubbing his lines and, in one instance, lifting Gandalf’s robe to show off a pair of white briefs.