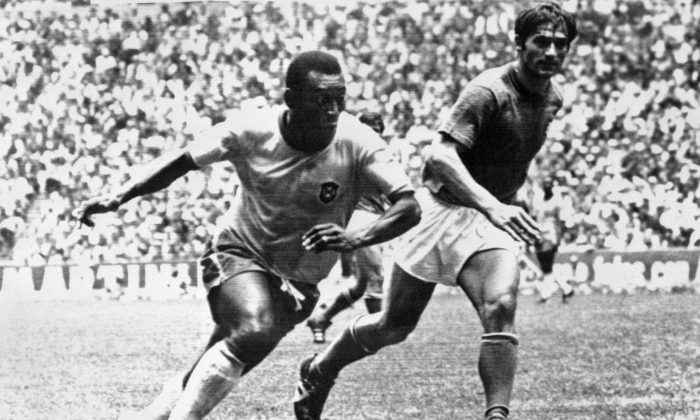 Brazilian midfielder Pelé (L) dribbles past Italian defender Tarcisio Burgnich during the World Cup final on 21 June 1970 in Mexico City. Pelé scored the opening goal for his team as Brazil went on to beat Italy 4-1 to capture its third World title after 1958 (in Sweden) and 1962 (in Chile). (AFP/Getty Images)
Good to Know

History of the World Cup Part 1: The Formative Years

Have you begun to notice that less skittles fall over during your visits to the bowling alley than players do on Champions League nights? Does José Mourinho’s observation that there was a queue for the Bernabeu changing room mirror sit a little uneasily with you? Do the perfectly quaffed tin-tin haircuts and torsos waxed to within an inch of their lives leave you feeling a little dispirited? Did the most recent, gratuitous “front lat spread” fall just short of the mark when it came to convincing you to buy the latest retina-scorching neon soccer slippers? The, leave your existential crisis behind and journey with us as we delve through annals, and learn of great characters, teams and tactics, in our historic celebration of the World Cup.

Formative Years of the World Cup

In 1930, few would have imagined the “Jules Rimet” would become the world’s most coveted trophy. By comparison to modern teams who submit to 18–24 months of gruelling qualification rounds in the hope of appearing on the world stage, nations had very little interest in the inaugural FIFA World Cup in Uruguay.

Though many South American nations registered interest, the hosts were so desperate to attract European participants, they offered to pay teams’ accommodation and trans-Atlantic travel expenses in full.

Thirteen teams eventually competed in a round-robin format, and 93,000 turned out to watch Argentina take on the hosts in the final game.

Following a heated argument over whose ball would be used in the final, FIFA displayed the first instance of the Fair Play and receptivity to technological advances they’re now synonymous with, when they decided that Argentina’s ball could be used in the 1st half and Uruguay’s in the 2nd.

One-armed striker Hector Castro scored in the 89th minute to crown Uruguay as the eventual winners. As Uruguay declared a national holiday the following day, and an angry Argentinian mob stoned the Uruguayan consulate in Buenos Aires, World Cup fever had truly arrived!

Having agreed to foot the bill if the tournament flopped (it eventually made a 1 million lire profit) Italy hosted the 1934 World Cup, which more closely resembled today’s competition, with 34 nations competing in qualifying rounds for 16 available places.

Bizzarely however, the Italians altered the format so that it was comprised entirely of knock-out rounds, and the majority of teams from the Americas, that had made the 13 week Trans-Atlantic voyage to compete, were knocked out after a single match!

Managed by tactical genius Vittorio Pozzo, who himself had adopted the styles of the hugely successful Manchester United team of the early 1900s, and bolstered by Fascist dictator Mussolini’s predominant ideaology, Italy went on to win the tournament on home soil.

Many nations subsequently complained that Mussolini had made the tournament a shop window for his fascist regime.

Despite growing political unrest in Europe, FIFA opted to stage the competition on the continent yet again in 1938, with France chosen as the hosts. Angry at the slight, Argentina and Uruguay boycotted the tournament.

Italy became the first country to defend the Cup successfully under Vittorio Pozzo’s continued guidance. Pozzo, who had served with an elite mountain warfare corps, known as the Alpini, during World War 1, oversaw the Italian team’s famous unbeaten run from 1934 to 1939.

Having travelled widely in a quest to unravel the secrets of football, he eventually created the “metodo” tactic, where players took up positions in the formation of two Ws, emphasising defensive solidity and attacking through counter-attack and long balls.

Drawing on the leadership qualities he learned during a difficult life in the trenches, he transmitted a work ethic to his team that sees him remain as the only coach to have ever retained the World Cup in successive tournaments.