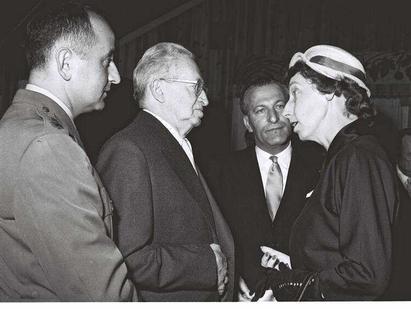 The Historical Ties Between Israel and Canada

The summer of 2014, which presented us with the harrowing conflict between Israel and Gaza, has pushed us all towards the reinforced belief that peace and stability are two very much needed things in the region. Yet, beside the usual rhetoric that we hear, it has also shown us who Israel’s true friends are. In this case, Canada. Our PM, Stephen Harper, stood by his confirmation of loyalty to Israel which he reiterated in front of the Knesset at the beginning of 2014, when he again expressed his support for Israel at the start of the conflict a few weeks ago.

However, the ties between Israel and Canada did not form in 2012 when Harper began to step up his relationship with Netanyahu, rather it has been a process stretched out since the foundation of Israel in 1948- undoubtedly one which is characterized by both up and downs, but generally one that has lead to to the current friendship whose fortitude is commendable. One which some have inferred to be a strengthening of bilateral relations. Whether or not this is true, the narrative of history attests to one thing: a relative growing solidarity has always existed between the two nations, from Canada’s balanced approach to the conflict between Israel and Gaza, to full on support. Perhaps the relationship has been best expressed by Stephen Harper who in 2009 said:

“At the heart of relations between Canada and Israel is the dynamism of our shared communities. We look forward to the next 60 years and beyond.”(Source)

Although some today attest that the change in Canada’s support for Israel from positive neutrality to complete unwavering friendship to Conservative reaction, there is simply one question to ask: Why have all the major opposition parties(the Liberals and the NDP) also expressed support for Operation Protective Edge? The issue is not one that is solely the product of current and present situations and conflicts, but one that has spanned out through the course of 60 years.

After the drudgery of The Second World the Jewish people in need of nation found themselves, for the lack of a better phrase, at the mercy of the United Nations Special Committee on Palestine where of the 33 countries that voted in favor of the partition deal in 1947 that would let Israel become a reality, Canada numbered among them. The interesting thing is that Canada in 1947, displayed its full confidence as an autonomous nation after its years in Europe, to the point that it did not listen to the UK’s insistent pressure to abstain. In 1948 Canada had fully recognized Israel’s right to exist, and in 1953 opened it’s for embassy in Tel Aviv.

In 1961, the famous David Ben Gurion, the first Prime Minister of Israel, and the first PM to visit Canada made history by returning to the very country he trained in with the Jewish Legion forces as an officer in 1918. This small film is one of the few records of his visit.

Yet Canada has not always showed full support for Israel, as seen by it’s vote in the UN for Israeli withdrawal from the West Bank in 1967 under Lester B. Pearson, who himself showed discontent at the fact that the UN puled out peacemaking forces from the Sinai peninsula. This only to show Canada’s seriousness towards its role on the international stage as peacekeeper. However, in 1973 Trudeau returned Canada’s peacekeeping officers to Sinai, only to criticize Israel’s war with Lebanon 10 years later.

It was in 1997, when Israel and Canada signed their continual accord through the Israel-Canada Free Trade Agreement that lead to trade worth half a billion in the consequent year alone. It seems that since this act, the ties between Israel and Canada strengthened proportionally, although they had been historically close, they just became that much closer. Interestingly, economics once again have served as the spark of amity. However there is more to it to that, Israel and Canada share a great deal more together.

Canada’s Liberal neutrality towards Israel, which was more like a evenhanded friendship, has turned today in one of amiable rapport since the Conservatives have been leading a majority in the House of Commons. Harper in fact argued that unlike the liberals whose aim was to keep a middle-stance morality on all issues, the Conservatives understand politics as a “moral affair” to imply support for Israel and its right to defend itself.

The truth is that there are a handful of things which I do not agree with Stephen Harper on, but I agree with his steadfast support for Israel. Canada’s backing of the Jewish nation is the right and moral thing to do, as it is in essence support for the only democracy in a sea of tyranny. This is not to say that it will not keep to its role as peacekeeper, and to its forever binding belief that war is rarely the right the answer.