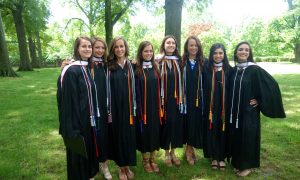 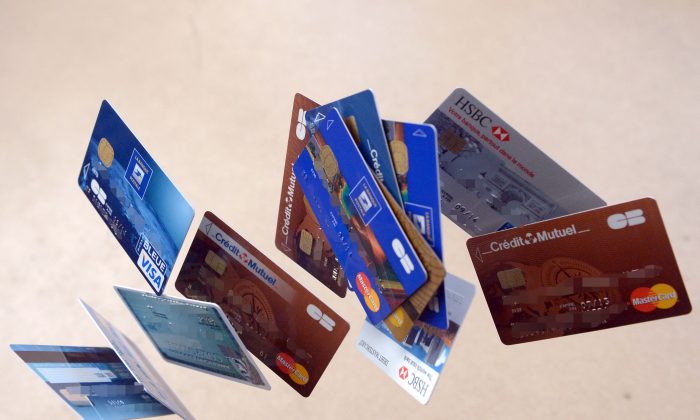 Payment cards falling down are pictured in this photo montage. In the United States, pre-paid debit cards are becoming ever more popular, but they carry certain drawbacks. (Damien Meyer/AFP/Getty Images)
Business

Prepaid debit cards are the next big thing for people. Banks say they are convenient. For example, they eliminate the need to carry cash, and cardholders don’t need to open checking or savings accounts or undergo credit checks to get the cards. Like with many other financial products, however, there is a catch.

According to an article on bankrate.com, “Prepaid debit cards have some key differences, such as weaker regulation and wide-ranging fees.” How the government should regulate these debit cards is still a matter of debate.

Some of the debit card companies offer simple fee plans on their websites, while some waive fees but require a minimum monthly deposit. All in all, banking experts believe checking accounts are still cheaper.

A few prepaid debit card issuers offer fraud protection, and some cards are insured by the Federal Deposit Insurance Corp. (FDIC). However, the FDIC doesn’t insure the American Express prepaid debit card because the funds are held by a nonbank entity.

Consumer advocates argue against using a prepaid debit card if it is endorsed by a celebrity, because the celebrity receives a cut from endorsing these cards. According to the 2013 Prepaid Cards Report on the Card Hub website, these “celebrity founded/endorsed cards are 17%–36% more expensive” than the average debit card. The report provides a detailed cost analysis of several prepaid debit cards.

The Mango Prepaid Card, for example is endorsed by George Lopez; the Young Money Card by Lil Wayne; the Approved Card by Suze Orman; and the RushCard by Russell Simmons.

“These payroll debit cards have long been touted by industry insiders as a way for employers to eliminate significant wage-related costs, including payroll processing fees and printing fees for paychecks,” according to law firm Brown PC.

The Visa Payment Solutions calculator indicates that a business with 50 employees paid on a weekly basis would save $4,290 annually if it used payroll debit cards.

For a business to achieve “the highest level of savings, the employer would need to get all of its workers using the prepaid card,” a July 1 article on the Consumerist website states.

Although it is certainly legal to offer employees the choice of being paid via debit cards, it is unclear if employers have the right to force employees to accept their wages through payroll debit cards, unless it is a stated condition of employment, according to a June article on the CPA Advisor website.

A civil class action lawsuit filed June 13 by the law office of Cefalo & Associates in Luzerne County, Pa., alleges that two McDonald’s franchise-owners forced an employee at one of their restaurants to accept the payroll debit card.

The suit was filed on behalf of all current and former hourly employees of McDonald’s who were forced to accept their wages through a JPMorgan Chase & Co. payroll card, while all managers were paid via direct deposit. It is believed that there are more than 750 people involved in the class action suit with the exact number not known at filing date.

The law firm is not using federal law but rather Pennsylvania law, which requires the state’s wage earners to be paid either in U.S. dollars or via check. Each state has its own wage laws.

However, according to media reports, paying only by payroll debit cards violates both federal and state laws.

On June 19, Pennsylvania state Rep. Ed Neilson sent a memorandum to Pennsylvania’s House members asking for co-sponsorship of his legislation banning the use of debit cards to pay employee wages.

Forcing payroll debit cards on employees that cause “unnecessary harm to our workers, must be stopped. Especially in these times of economic challenge, it is imperative that employees be paid a fair day’s pay for a fair day’s work,” Neilson said in his memorandum to House members. As of July 15, his legislation had not been introduced.

The federal Fair Labor Standards Act of 1938 also regulates wage payments, and the Federal Reserve’s Regulation E includes rules and procedures for electronic fund transfers. So, while some protections are already available concerning a number of payroll-related issues, it is yet to be seen how they will be applied to payroll debit cards and whether new legislation is needed.

For consumers who are deciding whether or not to use prepaid debit cards instead of cash or a traditional debit card account, they should shop around and look carefully at the fees being charged to decide whether these cards are right for them.