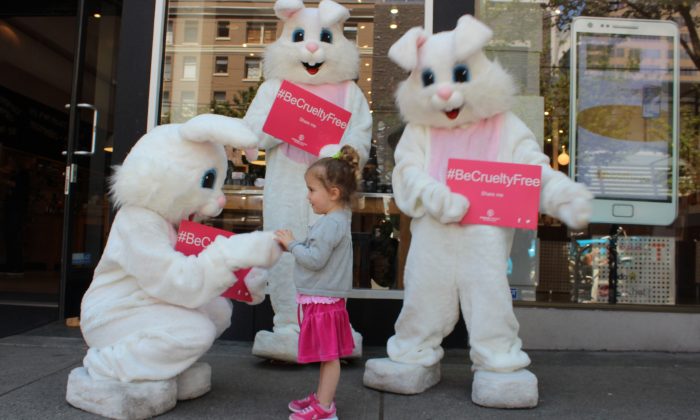 A little girl is enchanted by a Humane Society International Be Cruelty-Free bunny. Be Cruelty-Free is a global campaign to end animal testing for cosmetics. (Aviva Vetter/HSI)
Canada

The Hidden Cost of Beauty

On Dec. 10 animal lovers around the world will gather to mark a relatively unknown occasion: International Animal Rights Day.

But in Canada, animal rights groups are upset that archaic animal testing practices, some developed as long ago as the 1920s, are still being used today for many beauty products made and sold here, where animal testing for cosmetics remains legal.

Lethal poisoning tests, force-feeding, vivisection, and putting chemicals in rabbits’ eyes or on their delicate skin are some of the antiquated methods still used for testing products such as lipstick and anti-wrinkle cream.

This has drawn the ire of groups such as Humane Society International (HSI), which says Canada should follow the example of several countries including those in the European Union that have banned testing cosmetic ingredients on animals.

“But doing the right thing for the right reasons doesn’t always happen in the corporate community, so [we need] legislation that says,’We’re drawing a line in the sand—you have to stop.'”

In addition to the EU, animal testing bans also exist in Israel, India, and the Brazilian state of São Paulo. Bans are being considered in the United States, Australia, New Zealand, Brazil and Taiwan.

HSI is urging the Canadian government to follow the trend by doing two things: banning the use of animal testing for cosmetic products and their ingredients in Canadian laboratories, and prohibiting animal-tested products from being imported or sold in Canada.

The two-part ban would not only be more humane, says Seidle, but also make economic sense.

“For a Canadian company, if they’re still involved in animal testing they’re already losing out on the world’s largest cosmetics market, which is the EU. So if you want to continue to sell there, or sell there in the future, the company does really need to kick its animal testing habits.”

Unlike some countries, Canada does not require that animal testing be conducted to demonstrate safety. Health Canada says it actively promotes the development and use of non-animal alternative methods and new technology.

“The use of laboratory animals in toxicity testing for cosmetics and their ingredients has been reduced significantly due to advancements in science,” says media relations officer André Gagnon.

“We continue to monitor what is happening in other jurisdictions, including the European Union, as well as the scientific advancements in non-animal testing methods for cosmetics and ingredients.”

A common objection to an outright ban from industry is that there are not enough alternative testing methods, and it is the safest method available to develop new products.

But recent figures suggest non-animal testing is business-friendly. Sales of “cruelty-free” cosmetics rose 42 percent between 2007 and 2010, according to a co-operative ethical consumerism report. A 2012 study commissioned by HSI also found that 88 percent of Canadians polled opposed the testing of cosmetics and their ingredients on animals, and 81 percent would support a ban.

In addition, hundreds of companies such as LUSH, JASÖN, and Kiss My Face have long sworn off animal testing and continue to develop competitive products by choosing from nearly 20,000 ingredients that have been tested and approved.

Further development of alternative testing methods that make it make it faster, cheaper, and more accurate than relying on animals will be a major factor in eliminating animal testing, says Seidle. Testing products on human skin donated from plastic surgery, for example, is one new method being used.

HSI’s “Be Cruelty Free” pledge, the largest global campaign to stop animal testing for cosmetics, has been signed by over 1 million people worldwide including about 75,000 Canadians since it was launched in 2012.