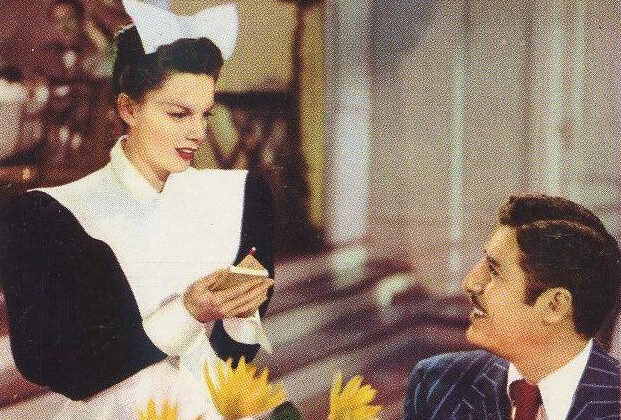 ‘The Harvey Girls’ (1946): Taming the Wild West of Hollywood

What do you get when you combine cowboys and waitresses in a 1940s musical? In 1946, this combination created a musical Western, “The Harvey Girls.” This MGM production was the first movie I watched while attending the Turner Classic Movie Film Festival in Hollywood this April. Starring Judy Garland, John Hodiak, and Angela Lansbury, this is an old favorite of mine. In fact, I’ve watched this movie on DVD with my family as far back as I can remember. Seeing this movie in one of the Chinese Multiplex theaters on Hollywood Boulevard was a great way to kick off my movie-watching at my first TCMFF!

It had been years since I had seen a movie in a theater, but not because of the pandemic. I never have frequented movie theaters, since I prefer classic films to new releases. In fact, going to the historic El Capitan Theater in Hollywood to see Disney fairy tale movies and old cartoons was my only cinematic experience during childhood. Besides that, I could probably count the times I’ve been in a movie theater on one hand, and those times were chance screenings of old movies.

Rediscovering an old favorite made me appreciate the experience of seeing a classic film on the big screen, as it was meant to be. While modern films are made with home viewing or online streaming in mind, 1940s filmmakers only expected their movies to be watched in theaters. I noticed things about the movie I’d never seen before!

Every film at the festival was introduced by a host and sometimes a special guest. Some introductions, like the one before “The Harvey Girls,” were brief, but all provided excellent insight. This movie was introduced by Tara McNamara, a film journalist and critic who, according to her TCM description page, “loves spurring audiences to think about movies.” She did just that when she introduced this movie. She told the small but appreciative audience, “Time travel does exist.” How, you ask? She explained, “Movies are a time machine.” As I sat in the dark theater, I felt transported to a different time and place, along with the crowd of strangers who shared the experience.

Who are the titular Harvey Girls? They were the waitresses in the Harvey Houses, restaurants which served train passengers heading west. As Miss McNamara described, the food on the westbound trains in the 19th century was revolting and hazardously unpreserved. Fred Harvey offered delicious alternatives in his trackside dining establishments. This obscure chapter of American Western history inspired this movie, as described in its dedication: “When Fred Harvey pushed his chain of restaurants farther and farther west along the lengthening tracks of the Santa Fe, he brought with him one of the first civilizing forces this land had known—The Harvey Girls. These winsome waitresses conquered the West as surely as the Davy Crocketts and the Kit Carsons—not with powder horn and rifle, but with a beefsteak and a cup of coffee. To these unsung pioneers, whose successors today still carry on in the same tradition, we sincerely dedicate this motion picture.”

In this story, a new Harvey House is opening in the rough Western town of Sandrock. Girls from throughout the United States take the Atchison, Topeka, and the Santa Fe train to become its waitresses. The only girl on the train with different plans is Susan Bradley (Garland), who is going to Sandrock to marry a man with whom she has corresponded but never met. She is vastly disappointed when she discovers that her fiancé, H. H. Hartsey (Chill Wills), is a middle-aged cowboy who describes himself as “a mangy old buzzard.” He, in turn, is surprised that his bride is such a lovely young lady, so he suggests they break the engagement. Susan’s relief turns to outrage when she learns that Hartsey’s beautiful letters were written by the cocky saloon owner, Ned Trent (Hodiak), as a joke. She decides to stay in Sandrock, become a Harvey Girl, and teach Mr. Trent a lesson.

Meanwhile, the evil Judge Sam Purvis (Preston Foster) worries that the Harvey House will turn the town respectable, while saloon singer Em (Lansbury) fears her beloved Ned will fall for one of the Harvey Girls. The wholesome waitresses face a lot of hostility and even violence as they establish their restaurant and try to civilize the community. Along the way, Susan befriends two other girls who came west in search of love, farm girl Alma (Virginia O’Brien) and dancer Deborah (Cyd Charisse). They both seem to find it, Alma with a wannabe blacksmith (Ray Bolger) and Deborah with the saloon’s pianist (Kenny Baker). Meanwhile, Susan glimpses Ned’s softer side when she discovers his love for gazing at a beautiful valley. If he can appreciate nature, perhaps there is hope for him to embrace the change brought by the Harvey House.

The Harvey Girls of this story symbolize the decency which characterized American movies in the 1930s-50s. In 1934, Hollywood adopted the Motion Picture Production Code as its law, with all the studios’ agreeing to abide by its rules about film content. This was nothing new; Hollywood had officially adopted this same Code four years earlier, yet no change in film content had taken place thus far.

In 1934, the Production Code Administration (PCA) was formed to enforce the Code, which was Hollywood’s final attempt at governing itself. Unlike its unsuccessful predecessor, the Studio Relations Committee, the PCA had a strong leader, Joseph I. Breen, and authority because movies needed its Seal of Approval to be released in the United States. This time, the Code was destined for success. The films released during the Golden Age of Hollywood which followed were wholesome, entertaining, and acceptable for all. They are now recognized as some of the greatest movies ever made.

What does this have to do with “The Harvey Girls,” besides the fact that it was one of the movies released during the Code’s Golden Era? Well, much like Sandrock’s Harvey House, people laughed at the Code and thought the PCA was doomed to failure. It seemed impossible that a few pages describing basic morality could reform the Wild West of the Hollywood film industry. It seemed similarly ludicrous that clean-scrubbed waitresses could turn gamblers and drunkards into respectable, churchgoing citizens, and even husbands. Nevertheless, neither task proved impossible, and the naysayers eventually had to eat their words.

Instead of coming in to fight and destroy, the Harvey Girls came to make friends and help the community of Sandrock. They faced opposition and hostility, but that didn’t stop them from pursuing their reform mission. The PCA started the same way, not as a board of harsh censors but as a group of reasonable friends. There were rules which had to be upheld, but they were wielded by reasonable folks who just wanted to help the business make the best films possible. Sometimes you can conquer a lot more stubborn enemies with a good cup of coffee than a musket!

One interesting point in this film is the saloon girls who work at the Alhambra Saloon, led by Em. Wearing extra makeup, gawdy clothes, and more daring styles, these dancing girls could be called “painted ladies” of the Old West. However, they are not clearly depicted as prostitutes. They are easy women who are in the business of “entertainment,” “recreation,” and showing men a good time. You see such “hostesses” in many Code films. They are employed by establishments to provide companionship to male patrons, but their services are never shown and rarely implied to be more than dancing, drinking, and conversation. Rather than being the watered-down children’s versions, Code films presented mature topics in a sophisticated way, leaving them up to personal interpretation, based on one’s age, maturity, and beliefs.

Anyone can enjoy this movie without concerns about offensive content. It’s just good, clean fun! The score is full of unique, memorable songs, especially the Academy Award-winning “On the Atchison, Topeka and the Santa Fe.” The period costumes are beautiful and colorful. The cast is full of top stars from the 1940s and beyond. It’s still a true Western, despite its musical score and feminine title, so there are some good gun scenes, horse sequences, an all-female barroom brawl, and a tense fight in a blazing building!

“The Harvey Girls” has something for everyone. The only things it doesn’t have are foul language, excessive violence, racy love scenes, and nudity. The beauty of the TCMFF is that it gives people the chance to celebrate movies like this. Choosing Code films versus temptingly indecent modern entertainment is like when the men of Sandrock choose the wholesome Harvey House dance over a night at the Alhambra, as encapsulated in this line: “On this night, the male population of Sandrock, for the first time, turned down a wild time in favor of a good time.”