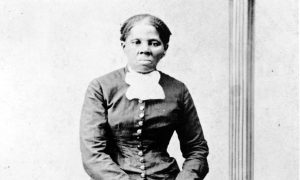 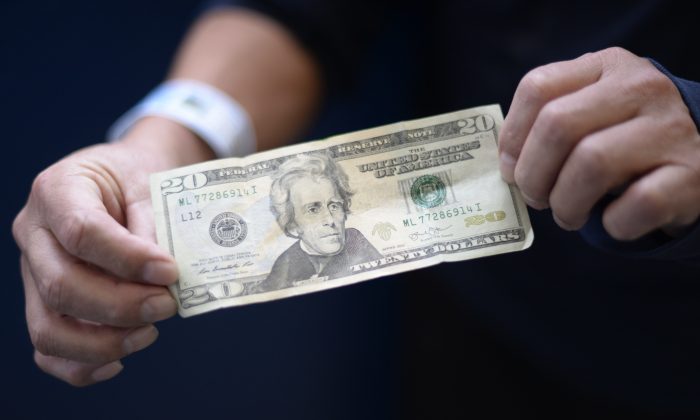 A member of a group of 228 immigrants deported from the United States shows a 20-dollar bill before exchanging it upon arrival at the Air Force base in Guatemala City on Jan. 10, 2018. JOHAN ORDONEZ/AFP/Getty Images
Viewpoints

The Harriet Tubman $20 Bill Has Been Postponed

Several years ago, during the presidency of Barack Obama, steps were taken to replace the portrait of Andrew Jackson on the $20 bill with Harriet Tubman, the former slave who’s best known for her work conducting slaves to freedom on the Underground Railroad.

In May, however, current Treasury Secretary Steven Mnuchin announced that such a change won’t happen until after President Donald Trump leaves office—and until at least 2028.

Whose portraits adorn our money says a lot about what we, as Americans, value. There are three questions to consider in regard to this issue: 1) What American not presently commemorated on our currency deserves to be so honored? 2) Which person currently depicted on money should be the one replaced? 3) Who makes these decisions?

Let’s answer the last question first. The same faces have been on our currency during my entire lifetime (in fact, the lineup of portraits has remained unchanged since 1929), so I had to look up who it is that makes such choices. It turns out that there are no written rules, but the power lies within the Department of the Treasury. In the past, minor officials within the department have made selections, although the final approval comes from the Secretary of the Treasury (and, apparently, sometimes with the input of the president, as seems to be the case with the proposed Tubman $20 bill).

The only law setting guidelines for eligible Americans is the simple provision that no living American can be so honored. According to the Treasury Department, those who have been pictured since 1929—George Washington, Thomas Jefferson, Abraham Lincoln, Alexander Hamilton, Andrew Jackson, Ulysses Grant, Benjamin Franklin—were chosen for their “permanent familiarity in the minds of the public.”

Of course, “permanent” is a relative term. Now that we are 90 years removed from the choice of those seven illustrious Americans, some of them are less familiar to contemporary Americans. I would bet that Grant, in particular, couldn’t be identified by more than half of Americans. I would have said the same about Hamilton, but his fame has been rekindled by the fabulous success of the musical by that name.

Indeed, even the memory of the Father of our Country, George Washington, has faded. I’m sad to report that on Feb. 22, I asked a class of college students which famous American was born on that date, and not one knew.

Times change, and at some point, many of the faces on our currency will, too.

So, question No. 2: In thinking about which of the seven men now on our currency could be replaced without disrespecting our history, I would say that there are five who definitely should be kept in their current place of honor. We can’t jettison Washington or Lincoln—their roles in American history are too significant and definitive. Likewise Jefferson, as the author of our Declaration of Independence, deserves to stay. So does Hamilton as the financial genius who established the credit of our infant government, and laid a foundation for our economic development.

I would also keep Jackson. He isn’t popular today for well-known reasons, but if there is any American president who deserves to be pictured on our money, it’s Jackson, who arguably did more to preserve the integrity of money than any other chief executive. Jackson deep-sixed the Second National Bank of the United States, and for the subsequent 70-plus years, the United States developed rapidly and its currency maintained its purchasing power, without an entrenched money trust to undermine the currency.

I won’t go off on an anti-Federal Reserve rant here, but suffice it to say that the dollar wouldn’t have lost more than 95 percent of its purchasing power since the creation of the Fed in 1913, nor would the U.S. government have been enabled to pile up more than $22 trillion of debt without the Fed’s complicity. Jackson strove mightily to keep the American people from becoming mired in debt, and the measure of his success is that he was the only president ever who got the national debt down to zero. That is worth honoring today by keeping Jackson on the $20 bill.

That leaves Ulysses Grant ($50) and Benjamin Franklin ($100) as candidates for replacement. History has treated Grant unfairly. He was a good (not perfect) and wise man who had set free his only slave, signed the 15th Amendment, which removed racial barriers to voting, and followed up his honorable service as a Civil War general with two terms as president, where his steady hand helped start the healing process for a severely divided nation.

The iconic Franklin at first glance would appear to be untouchable. He was a folk hero, witty author, and a man of science who lent his wisdom as a delegate to the Second Continental Congress of 1775 and the Constitutional Convention of 1787. However, having read Harlow Giles Unger’s book about the woefully underappreciated American benefactor Beaumarchais last year (“Improbable Patriot”), I’m a bit down on Franklin. Old Ben apparently was willing to cut off any other supply of arms to the American colonies if he wasn’t getting a kickback as the facilitator.

But that’s a minority position, and Franklin remains much more famous than Grant, so if anyone is to get the boot from our currency, Ulysses Grant is my nominee.

Question No. 1: If somebody new is going to be pictured on our currency, who? That question will elicit many opinions. Certainly, at this stage in our history, it seems anomalous that we have neither a woman nor a black American. Harriet Tubman remedies both deficiencies. I’m sure we could sit around a table and discuss many worthy candidates to be the first to represent her gender and race on U.S. currency, but Obama chose Tubman.

That immediately prompted some chortles on the right about Obama making a gun-toting, Christian, Republican woman his choice. While true, that response missed the larger significance of the Tubman choice.

Tubman, once an illiterate slave, not only helped to free many other slaves through her courageous work on the Underground Railroad, but risked her life as a scout and spy for the Union army during the Civil War. She also had some Florence Nightingale in her, performing extensive work as a nurse. Her compassion led her to establish a home to care for helpless senior citizens.

This brave, unselfish woman dedicated her life to freedom and helping others. She embodied what is great and good about America, and I, for one, would be delighted to see her honored on our country’s currency.