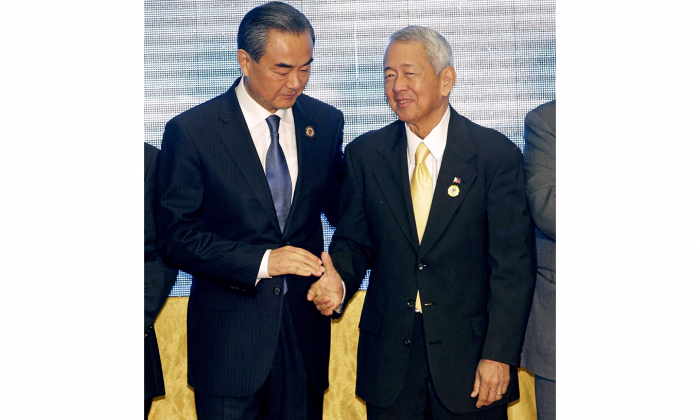 A recent ruling on a territorial dispute in the South China Sea between China and the Philippines has left Canada “deeply concerned” about escalating tensions in that region. Meanwhile, China is furious that the ruling favoured the Philippines, and the ruling poses a dilemma for Taiwan.

Several countries in East Asia including China, the Philippines, and Taiwan have competing claims over the South China Sea area, which includes fishing grounds and some of the world’s busiest  shipping lanes, with 30 percent of global trade passing through these waters. The region also includes two chains of islands, the Spratly and the Paracel islands, some of which are believed to be untapped sources of natural gas and minerals.

The July 12 ruling by the Permanent Court of Arbitration, an international tribunal in The Hague, concluded that China’s territorial claims to the islands have no legal basis. This sparked a furious reaction from Beijing, which disputed the court’s jurisdiction and denied the validity of the ruling, categorically rejecting it.

A statement released by Canadian Foreign Affairs Minister Stéphane Dion said:  “We are deeply concerned about regional tensions that have been escalating for a number of years and have the potential to undermine peace and stability. It is essential that all states in the region exercise restraint and avoid coercion and actions that will escalate tension.”

Gordon Houlden, Director of the China Institute at the University of Alberta and former Canadian  diplomat who has served in both Beijing and Taipei, says any confrontation between the parties involved that affected trade could have negative impacts for Canada.

“As a nation heavily dependent upon trade, Canada requires the unimpeded flow of trade,” he wrote in a recent column in the Edmonton Journal. “While no party to this dispute has threatened closing these waters to commerce, armed conflict in the South China Sea would have that effect, with immediate economic consequences that would not spare Canada.”

Taiwan in the meantime, although not directly involved in the dispute, is unhappy with the ruling because part of it states that the disputed Spratly islands are rocks and not islands. This in effect, nullifies Taiwan’s claim to Taiping, the largest natural island in the South China Sea, which the ROC (Republic of China, Taiwan’s official name) administers as part of Kaosiung, a municipality in south-western Taiwan facing the Taiwan Strait.

According to the ruling, Taiping, being a rock or reef, has no right to be a 200-nautical-mile exclusive economic zone under international law. One consequence is that it puts the fishing rights of Taiwanese fishermen in jeopardy.

At a National Security Council meeting on July 19, Taiwanese President Tsai Ing-wen stated that: “The wrongful classification of Taiping Island as a rock severely jeopardizes the rights of the nation.”

“The award is totally unacceptable to the people and has no legally binding force on the ROC,” she added. “The ROC will therefore take actions based on four principles.”

Tsai Ing-wen announced that her government will step up patrol missions to safeguard the rights and safety of Taiwanese fishermen operating in the South China Sea.

Instructing Taiwan’s Ministry of Foreign Affairs to pursue a peaceful settlement through multilateral dialogue with all parties concerned, she emphasized Taiwan’s willingness “through negotiations conducted on the basis of equality, to work with all States concerned to advance peace and stability in the South China Sea.”

Earlier, the Presidential office said that the ROC had not been invited to take part in the court’s proceedings, nor had its views been consulted.