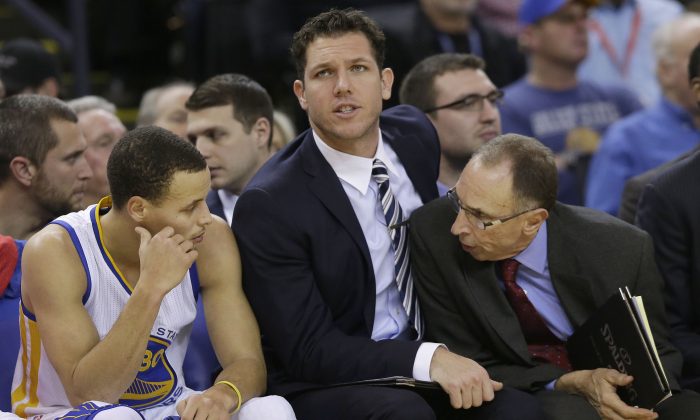 The man behind the Golden State Warriors defense has relayed some of the things that provide inspiration, and also described a great defense as poetry.

“The fun thing, the real fun thing is watching a group defensively become connected and work in concert. That’s kind of the poetry of it,” Ron Adams told ESPN.

Adams, nicknamed “the guru,” is the assistant coach responsible for the Warriors top-ranked defense. He compared defense to poetry while discussing his in-game charting of the Warriors’ defense, saying: “It’s just flow. It’s just free verse. I’ll be writing, and I’ll categorize some stuff if there’s a pattern. I’ll try to find a pattern. I don’t want to fool myself in terms of what’s happening during the game.”

Adams, 67, who has been coaching for decades, is described as an intellectual coach, “a thinker whose academic pursuits inform his hoops.”

Adams is “obsessed with improving the people in his life and believes improvement to be its own edifying force,” the story notes.

“I think it’s the most invigorating thing in life, if you feel like you’re growing,” he said. “You read a book. How do you feel after you read a book? You feel great. Look at what I learned.”

“If you listen to ‘On Being’ with Krista Tippett, like I do. I love that show, and I go away, and I’m just amazed at how little I know and how challenged I was by listening to a dialogue between two people on a relevant topic,” he added.

“That’s the nature of life, and it should excite everyone. I think that we as coaches, you try to get people excited about that. Not that show necessarily, but I’m talking about growing and expanding. That’s the fun thing of life, and it doesn’t have to be sport. It can be so many different areas in which young people can just get a sense of growing and learning and developing. There’s nothing more exciting than that.”

Almost every Warriors player has improved in some way defensively since last season, perhaps David Lee and Stephen Curry the most. Curry is now third among point guards in defensive real plus-minus.

“A lot of our steals are coming simply by good hands,” Adams said. “Steph, for example, has really gotten skilled on the ball, anticipating passes — we call it sticking the ball. He’s really developed kind of a feel for that.” Curry’s hands are fast, which is why he boasts one of the quickest triggers on his shot release. Now, he’s using those fast hands to bedevil offenses as well as defenses.

Another big component of the defense is the availability to switch frequently, with Andre Iguodala, Shaun Livingston, Klay Thompson, Draymond Green, Harrison Barnes, and Justin Holiday all standing between 6’6″ and 6’8″, and playing two through four.

That enables the players to switch without worrying about mismatches.

“It doesn’t just happen,” assistant GM Travis Schlenk said of Golden State’s defensive success. “When you look at the guys, other than Andre [Iguodala] and Shaun [Livingston], they’re all guys we’ve drafted. We’ve made a focal point from when I came on the front office side. The guys we’ve looked to draft have all been long.”