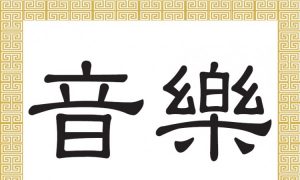 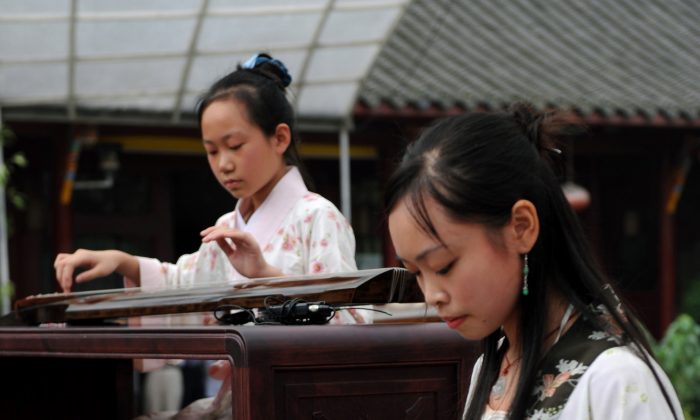 The Guqin: ‘Instrument of the Sages’

The guqin, or qin, is a seven-stringed, classical musical instrument that is a relative of the zither family, and has a history in China of about 5,000 years.

Scholars and sages considered the qin as the singular instrument that captures the essence of traditional Chinese culture.

The qin, along with calligraphy, chess, and painting, (琴棋書畫) were considered the four must-have skills for literati, intellectuals, and cultured people in ancient China to cultivate their inner self.

The guqin is usually about four feet in length, with a head, neck, shoulders, and waist, and a tail that resembles that of a phoenix. The curved surface board represents Heaven, while the flat underside represents the Earth.

Traditionally, this instrument had five strings made of silk, which represented the five elements of metal, wood, water, fire, and earth. The extra two strings are a more modern addition, and were added about 1,000 B.C. Also, the strings are now usually made of steel.

With more than 1,000 different finger techniques, the guqin is one of the most complicated instruments in the world to learn, and requires great dedication to master it.

The hands are used in plucking, picking, sliding, pushing, and vibrating the strings to produce a variety of sounds, from flowing water to loud and bright tones.

Confucius (551-479 B.C.) was known to have played the qin, and legend suggests that Huang Di, the Yellow Emperor, was partly responsible for its invention.

The Chinese word 知音 (zhiyin), originated from a story about the qin. 知音 literally means “know [the] music,” yet, through this story, has come to mean soul mate.

In traditional Chinese culture, when people concentrated on playing elegant music, it was very similar to a state of meditation and it could take them to different spiritual realms. It was a way of cultivation.

According to the “Tang Wen (湯問)” in the ancient record “Lie Zi (列子)”, during the Spring and Autumn period, Boya was a virtuoso in playing the qin. His good friend Zhong Ziqi could understand his music very well.

By listening to it, Ziqi could tell what was on Boya’s mind or what Boya was expressing when he played.

For example, when Boya was thinking of a high mountain while he played, Ziqi exclaimed, “Wonderful! It’s as magnificent and dignified as Mount Tai!”

When Boya played with flowing water on his mind, Ziqi said, “Tremendous! The melody is as vast and mighty as a great river rushing past.”

“高山流水 (Gāo Shān – Liú Shuǐ),” or “High Mountain and Flowing Water,” became the name of a classic guqin piece. As a four-character chengyu, or idiom, it means elegant, high art that not everyone can understand.

Through qin music, Ziqi could understand Boya and share the spiritual journey with him to different realms. Thus, they became kindred souls. 知音 has since been widely used to refer to soul mates.

Guqin, dating back 2,500 years, have been unearthed in Chinese tombs, and many Chinese writings from around 3,000 years ago mention the playing of the qin.

In 1977, the piece “Flowing Water,” performed by famous qin player Guan Pinghu, was included on a gold-plated LP recording that NASA sent into outer space on the Voyager 1 and Voyager 2 spacecraft.

Ten years ago, guqin music was recognized by UNESCO as one of the “Masterpieces of the Oral and Intangible Heritage of Humanity.”

But its exact origin, though often debated by scholars, still remains a mystery.

That mystery is echoed in the poem “Hut Among the Bamboo” by Wang Wei:

“Sitting alone, in the hush of the bamboo; I thrum my zither [qin], and whistle lingering notes. In the secrecy of the wood, no one can hear; only the clear moon comes to shine on me.”