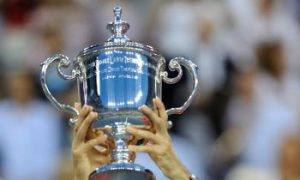 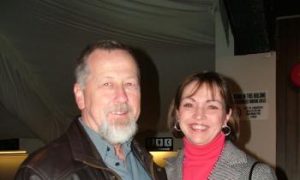 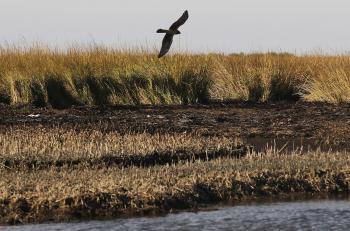 A hawk flies over marsh grasses battered by oil from the BP oil spill December 5, in Barataria Bay, Louisiana. Nearly eight months after the spill, oil remains along the shoreline of some of the barrier islands in the area and has killed off sections of marsh grass. (Mario Tama/Getty Images)
US

The Gulf Oil Spill and the Fate of the Remaining Oil

By Nicholas Zifcak
Print
How much oil remains in the Gulf after last year's spill may be unknowable, said a congressional report released Monday. The federal government came out with an "oil budget" last August breaking down by percentage how much of the estimated 200 million gallons spilled was removed by the different methods used: direct capture at the well site, in situ burning (controlled ignition and burn), skimming, chemical dispersion, as well as natural processes of dispersion and evaporation.

Now, in a report to Congress, the Federation of American Scientists (FAS) cautioned against drawing conclusions from these estimates. It argued, "perceptions of the oil’s fate may influence congressional interest and action with consequences for the affected stakeholders." The implication was that politicians will not take action if they think the oil has degraded and is no longer an environmental threat, or will take action if they believe more cleanup is needed.

Yet the FAS report said, "It is debatable whether the fate of the remaining oil will ever be established conclusively."

Shortly after the well was capped on July 15, 2010, National Oceanic and Atmospheric Administration (NOAA) satellite photos no longer showed a plume of oil at the surface of the ocean waters. On Aug. 4 the government released its "oil budget" explaining the fate of the millions of gallons of oil. However, only a portion of its estimate was based on measured data. In fact, for only 25 percent of oil spilled is there measured data for how it was cleaned up: 17 percent collected at the site of the well, 5 percent burned, and 3 percent skimmed.

The rest of the oil is believed to have naturally dispersed (13 percent), been dispersed by chemicals (16 percent), evaporated or dissolved (24 percent), with a remaining 22 percent unaccounted for. But these estimates were not based on data gathered but rather on "theoretical considerations and expert knowledge from past incidents," according to the government's "oil budget calculator" document released in November. The uncertainty is significant.

The FAS report examined multiple studies of the Gulf oil spill and said the uncertainty in the government's estimates applies to tens of millions of gallons of oil. The government's November report put the amount of oil chemically dispersed at approximately 33 million gallons of oil, but the amount of oil dispersed by chemicals could be as much as 60 million gallons, or as few as 20 million.

The FAS report to Congress said that because of the complexity of the Gulf system, the resources required for collecting data, and the varied interpretations of the results, we may never know the fate of the oil. The report proposes what the possible fate of the rest of the oil might be: "Even assuming that approximately half of the oil has been removed from the Gulf marine environment through direct recovery, burning, skimming, or evaporation, a substantial portion of oil—over 100 million gallons—remained in the Gulf as of the oil budget estimate."

The report suggests several possibilities of where the rest of the oil went, including subsea plumes, contamination of shorelines, biodegradation by microbes, and the sea floor. There is no conclusive data indicating how much of the oil can be accounted for by these factors.