Strategic Shift in US Approach to China Gains Momentum Under Trump 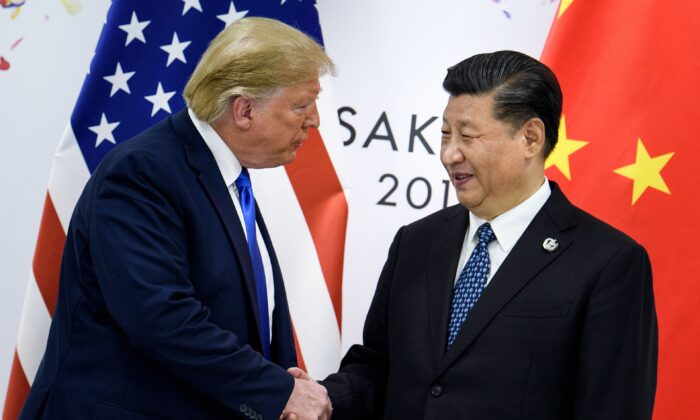 China’s leader Xi Jinping (R) shakes hands with U.S. President Donald Trump before a bilateral meeting on the sidelines of the G20 Summit in Osaka on June 29, 2019. (Brendan Smialowski/AFP via Getty Images)
By Bonnie Evans

The United States is increasingly closing its doors to engagement with China, experts suggest.

From calls in the U.S. Senate to punish China economically for its secrecy and coverup of the COVID-19 outbreak, which has led to a worldwide pandemic, to more structural risks of supply-chain dependency that the United States faces in its relationship with China, bipartisan opposition to China may be at an all-time high.

On April 8, Sen. Lindsey Graham (R-S.C.) joined not only his Republican allies but also his Democratic senatorial colleagues in calling for China to put a stop to the “wet markets” that the Chinese regime has claimed was a breeding ground that initiated animal-to-human transmission of the CCP (Chinese Communist Party) virus, commonly known as novel coronavirus.

But the immediate moves against the Chinese regime’s influence in America are part of a larger strategic shift in America’s China policy, which has been gaining ground since President Donald Trump took office in 2017.

Retired Air Force Brig. Gen. Robert Spalding, now a senior fellow at the Hudson Institute in Washington focusing on China, East Asia, and national security, told The Epoch Times, “A growing understanding coalesced between 2014 and 2016 at the Pentagon on ways the Chinese Communist Party operates.”

That time period represents the final two years of President Barack Obama’s term of office and administration. As John Mills, who has served as a director of cybersecurity policy in a key role at the Department of Defense (DoD) pointed out in an interview with The Epoch Times, little was done to confront the problem.

“During the Obama years,” he said, “there was a lot of finger-wagging and lecturing to the Chinese” from the administration about Chinese cyber incursions into U.S. confidential cyberspace, but there was a ‘passive’ unwillingness to do anything substantial about the problem.”

That encouraged the CCP “to be even more adventurous,” Mills said.

Nonetheless, Spalding said those were fruitful years at the Pentagon in assessing the overall impact of China in and on the United States.

The U.S. Air Force Office of Commercial and Economic Security Analysis (OCEA) “stood up to consider the challenges posed by China,” he said. Gradually, its role expanded to look at all aspects of China’s influence in America.

According to its website, OCEA “is an Air Force-led, multi-service innovation established to preserve Air Force and DoD military advantage from commercial and economic risks.”

It identifies and assesses “geostrategic risks that challenge DoD equities and threaten to undermine current foundations of U.S. global power, leadership and national security.” Ultimately, OCEA “aims to inform USG decision-makers of the full range of options available to counter these risks.”

Spalding said, “At the end of the Cold War, we kind of took our eyes off China” in the intelligence community.

But over time, “the intel community had to contend with more and more” China-related issues, and had to respond to them, he said.

Ultimately, it was a process that Spalding compares to “priming the pump.”

A growing realization of the threats that China poses to the United States has ultimately led to the intelligence community looking at China “not just in a battlefield” context, but as a multi-faceted source of risks to U.S. national security, Spalding said.

OCEA’s mandate grew to include disseminating information on issues at U.S. universities, such as infiltration of research labs to illicitly transfer new technologies, and Confucius Institutes established to use Chinese propaganda to soften China’s image in the United States, Spalding said.

The OCEA also considered issues of Chinese infiltration into the U.S. business community: the Thousand Talents Program that has used hefty pay packets and bonuses to lure top American academics and scientists to labs in China, at times taking with them technology and research developed by public grants in the United States.

OCEA also focused on supply chains, a matter of critical importance as the United States wakes up to the realization that its supply of pharmaceuticals and medical supplies is largely dependent on manufacturing and production capacity—and willingness—in China.

Spalding said that the Pentagon “started looking at this dependence” on supplies from China in the 2014–15 time frame.

“We realized that the military was incredibly reliant on the Chinese Communist Party to supply the U.S. military,” Spalding said.

That focus sharpened in 2017, as the National Security Strategy (NSS) was being developed. Spalding was the chief architect of the NSS in the Trump White House.

A significant challenge has been “the intelligence community’s unwillingness to call China an adversary.” This has been a “long-term problem,” Spalding said.

The new NSS declared China an “adversary” of the United States.

Trump, he said, has been a “guiding light” in this regard. The president’s “willingness to confront” China has been key in underpinning the “fundamental shift in the intelligence community” toward China that has occurred since 2018.

But mostly, he said, “the president has an incredibly accurate gut instinct.”

Normally, in policy-making at this level, “there’s a three- to five-year lag time from what the generally accepted status quo is, and reality,” Mills said. That lag time is potentially catastrophic because it obscures the situation as it is happening in real time.

But, Mills said, “Trump knocked the game of ‘Go’ on the ground and he blew them away.”

The game of ‘Go,’ known in Chinese as weiqi, is a 2,500-year-old, two-person Chinese board game of abstract strategy and encirclement of one’s opponent. It’s considered by many to be several orders more complex than chess.

In formulating his approach to China, Trump decided not to follow the expected rules of the game, Mills said, and although the Chinese have “tried to set the game up again,” that strategy has failed.

“It drove them bananas,” he said.

Mills indicated that there have been stark changes among administrations since the early 2000s, when asked about the challenges he faced in confronting and denying China its goals to compromise U.S. cybersecurity at the Pentagon.

During the George W. Bush years, he said, “there was a realization that they [the CCP] were vacuuming up everything and formulating a plan” to use inappropriately acquired information.

“From day one of the Trump administration,” however, “it was all about imposing substantive, real costs” on Beijing for bad behavior in the U.S. cyberworld.

“They had never experienced that before,” Mills said.