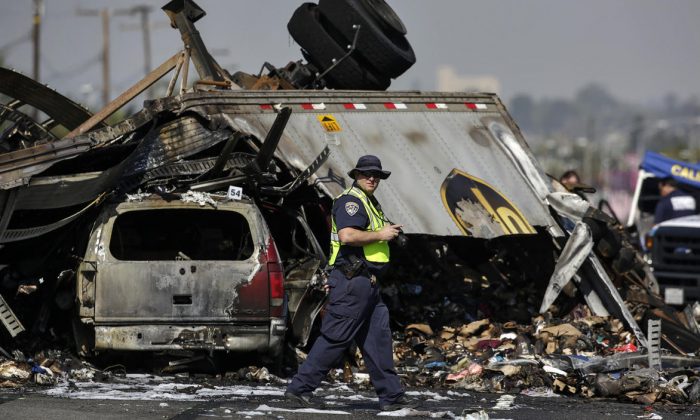 A California Highway Patrol investigator takes photographs at the scene of a multi-vehicle crash caused by drag racing on the 5 Freeway in Commerce that killed three people. (Irfan Khan/The Los Angeles Times)
Crime and Incidents

The Growing Problem of Street Racing

Illegal street racing has authorities worried. Not much has seemed to keep the sometimes deadly pastime in check.”[T]estosterone-fuelled egotists,” an Australian newspaper coined persons using public roads as speedways, a phenomenon without borders that has risen at dizzying pace worldwide ever since the first installment of the movie franchise “Fast and Furious,” starring Paul Walker, in 2001.

On the highly travelled Golden Street Freeway, three persons lost their lives in a fiery crash when one of two Dodge Challengers engaged in a race forced a UPS 18-wheeler over the center divider and into oncoming lanes. The big rig became airborne and sheared off the top of a Nissan and crushed a Ford Explorer. The driver of the big rig and two young occupants in the Nissan lost their lives. Four persons were critically injured. One of the race participants was injured and arrested, but the other racer remains at large.

The next day, in Downey, a drag racer on a busy thoroughfare lost control and hit and killed a pedestrian. Earlier this year in Hawthorne, a 36-year-old music teacher lost his life to a suspected street racer. More recently, in March, a street race in Ontario, Calif., just east of Los Angeles, cost the life of one of the 19-year-old participants.

Accidents caused by drag racing place Southern California on pace for a dubious record-setting year for deaths. Police agencies vow to act and to share intelligence and to strategize. “Nobody really pays attention to it until something bad happens,” said Los Angeles Police Department (LAPD) Sgt. Jesse Garcia, who formerly headed the Street Racing Team, mothballed in 2015, replaced by the Aggressive Diving Detail.

Race get-togethers can be impromptu, or, according the LAPD, through social media. And events are not always about racing. Fairmont Avenue, a wide street in Glendale, Calif., a Los Angeles suburb, looks like a landing strip. Speeding cars are a frequent complaint, but so are cars “doing doughnuts at odd hours,” says a resident.

Though tragic consequences of street racing are well-documented, the act is hardly new. In 1955, the Los Angeles Times reported on “teenagers in souped-up jalopies” on a section of the Los Angeles River bed, where the Los Angeles police rounded up 150 youths.

Some may claim that racing is one kind of manifestation of a young male’s rite of passage, a coming of age. Empirical evidence supports the notion that the male hormone testosterone, at its zenith in the late teens, is tied to aggressiveness and as such leads to derring-do like putting lives at risk by racing.

David Vazquez, 34, started racing as a teen. “You feel the adrenaline pumping in your body. It’s like getting on a roller coaster,” he said to the Los Angeles Times.

Testosterone is connected to a myriad of manifestations of male dominance, states the magazine Scientific American, from who drives the biggest or fastest car to who has the nicest lawn or fame and wealth. And the younger the male the more prevalent the hormone, reported the late Dr. James Dabbs, a researcher who devoted his professional career to the study of testosterone. Activities like racing fit Dabbs’s paradigm of testosterone in young males exerting dominant behavior.

“It’s one part tires, one part testosterone,” ABC News mirrors the Australian newspaper in a report on legal street racing in Medley, Fla. In the quest to quell illegal street racing, which has claimed over 1,000 lives nationally since the release of the original “Fast and Furious,” this Miami suburb has something going and other municipalities are copping on. “Beat the Heat” is a program sponsored by Medley’s police department with legal street races under the supervision of law enforcement. Youths can drag race cops.

Begun in 1984, in Jacksonville, Beat the Heat has evolved to a well-oiled non-profit with chapters in 36 states, based in Texas. Claims its website: “To make the experience as thrilling as possible, the officers will often turn on their sirens and kick up smoke for the crowd, and to let their competitors know that they, too, can let their hair down every once in a while.”

Though not enumerating data, the news agency Reuters notes a reduction in illegal street racing mayhem since the program’s start in 2009. A subsequent success of the program in Miami led to its police department to disband its anti-street racing task force.

Whether the circumstance of street racing is fueled by surging testosterone or life imitating art, illegal street racing is “woven into the Southern California DNA,” notes the Los Angeles Times. To date, an abatement program in the vein of Beat the Heat has not been rolled out in California.