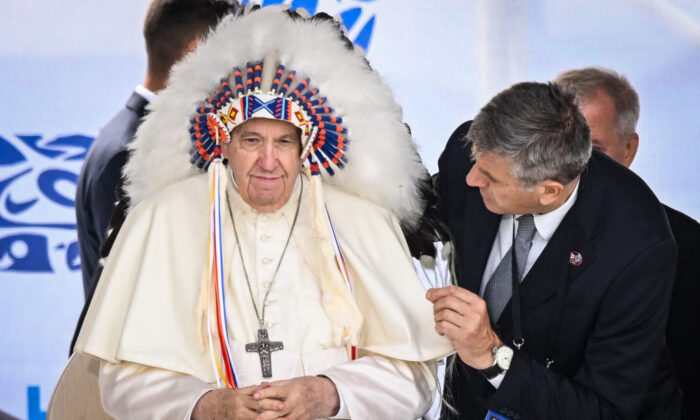 Pope Francis wears a headdress presented to him by Indigenous leaders during a meeting at Muskwa Park in Maskwacis, Alberta, Canada, on July 25, 2022. (Patrick T. Fallon/AFP via Getty Images)
Viewpoints

The apology industry has never been busier. On July 25, Pope Francis offered an apology to the indigenous survivors of Canada’s residential schools, where children suffered “cultural destruction and forced assimilation” promoted by government policy at the time and keenly implemented by the Catholic Church. The Pope called this policy “disastrous” and “evil.”

In June, the Belgian King Philippe offered an apology to the people of the Democratic Republic of Congo for atrocities committed when his ancestor, King Leopold II, ruled the Belgian Congo as a personal fiefdom.

National apologies are also a regular occurrence in the Australian parliament. Most recently, on Oct. 22, 2018, former Prime Minister Scott Morrison delivered the National Apology to Victims and Survivors of Institutional Child Sexual Abuse. In delivering the apology, the prime minister atoned for institutional child sexual abuse.

Of course, the now historic National Apology to the Stolen Generations delivered in Parliament on Feb. 13, 2008, by then Prime Minister Kevin Rudd for the indignities inflicted on Aboriginal children was a major televised event.

The apology industry is nearly as old as human history. A website of the Institute for the Study of Human Rights lists 823 political apologies stretching back a thousand years.

The list starts in 1077 when the Holy Roman Emperor, Henry IV, apologised, by standing barefoot in the snow for three days, to Pope Gregory VII for instigating church-state conflicts. It also lists the day of fasting and prayer, in 1697, to atone for the injustice inflicted on the victims of the Salem witches’ trials, conducted just five years before.

People of goodwill may well applaud the readiness of governments to offer national apologies to those who have been wronged in the past. Preparation for, and delivery of, a national apology does, however, present governments with challenges relating to the drafting of these apologies.

As demonstrated, even with the Pope’s Canadian apology, the language used in an apology is potentially controversial and contentious, and often contested. Sometimes, the delivery of an apology provides conclusive evidence of the existence of past wrongdoing.

Such evidence may later be relied upon to establish legal liability, requiring payment of compensation to the victims or their descendants. To strike the right tone when drafting an apology is thus an intricate operation requiring skill and foresight.

It is interesting to note that the number of national apologies delivered worldwide has increased in recent times.

This increase, in itself, contributes to the creation of a climate in which the practice of apologising becomes an instinctive but insincere reaction or response to instances of neglect that may have extended over decades.

National apologies typically rely on, and are supported by, a backward-looking philosophy, often grounded in the belief that past practices have trashed the human rights and interests of vulnerable people in society.

But reliance on a backward-looking model of justice may create new inequities in the present, especially if it blames those who themselves have not been responsible for the historical instances of abuse and neglect.

If the appropriateness of past practices were evaluated in the light of modern-day developments and the prevailing philosophy of ethical relativism, these instances and practices would be justifiably described as abhorrent. But such an evaluation overlooks the realisation that our ancestors, in their time, may have endeavoured to embrace enlightened solutions.

It also ignores the possibility that current practices, assiduously promoted by governments may well be the subject of apologies in the future.

For example, these practices, which may generate societal convulsions in the future, might include the occurrence of vicious wars and atrocities, famine, ethnic cleansing, the provision of abortion services on demand, the condoning of infanticide in certain circumstances, the accessibility of methods to shorten a person’s life that is not deemed worthy anymore, just to name a few.

It is thus reasonable to ask whether, and if so, to what extent apologies still serve the purpose of expressing regret and remorse. While national apologies constitute symbolic expressions of remorse, they remain but a poor substitute for fashioning effective strategies to assist the victims of neglect and abuse.

However, these ruminations should not necessarily deter governments from offering national apologies. This is because they are certainly a means to stem the tide of resentment, at least temporarily, and it may facilitate reconciliation while offering a way forward.

The symbolism, in itself, may thus alleviate the pain felt by victims of abuse, even if it does not result in measurable material benefits for them.

The booming apology industry should not, however, impede efforts by people to recognise the contributions made by people who lived in the past.

In a recent article, focusing on Indigenous Australians and the Church, David Daintree implores that “after years of ‘sorry’ days, could we also acknowledge the good work that men and women of the Church did for many Aboriginal groups around Australia: not just religious instruction (which counts for little in the secular mind) but education in the arts and sciences of the world, social work, housing, medical care. And most of that at a time when the state did next to nothing to aid the native people.”

Daintree’s exhortation is a useful reminder that history is not a one-way story but a rich kaleidoscope of good and bad. And while it is necessary to atone for the dreadful things that have happened in the past, it is also necessary to identify, and celebrate the good things that our ancestors have contributed to Western civilisation.