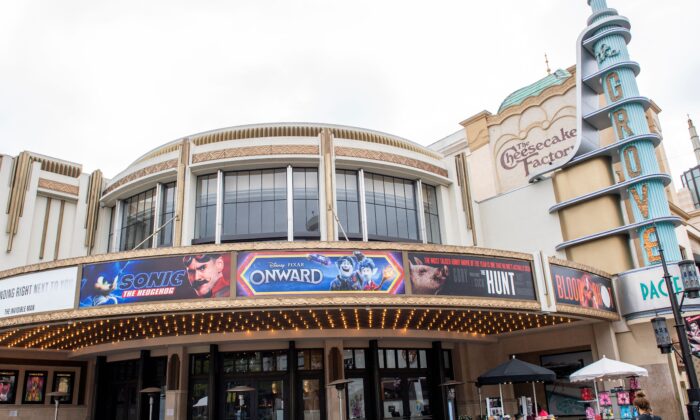 View of the Pacific Theater at The Grove on April 13, 2021, in Los Angeles. (Valerie Macon/AFP via Getty Images)
Southern California

LOS ANGELES—The Grove, a mall known for high-end shopping and dining in Los Angeles, added a coil wire fence to enhance security after a spree of smash-and-grab robberies in California amid the holiday season.

After being targeted by a burglary last month, the shopping center installed wire fencing at its entrances and exits, and all of its stores have their windows coated with a special ballistic film, which provides comprehensive protection against break-ins and burglaries.

On Nov. 22, about 20 people broke into the Nordstrom at The Grove, which was two days after 80 people rushed into a Nordstrom in San Francisco and stole merchandise.

Three suspects were taken into custody soon after The Grove was burglarized. Police have found stolen clothing items and a cash register in the suspects’ vehicle, according to local news reports.

Also, on Nov. 21, the exterior of a Louis Vuitton and Saks Fifth Avenue store in Beverly Hills were found to be smashed with a sledgehammer, though thieves failed to get inside.

In an email written to The Epoch Times, the California Chamber of Commerce condemned these crimes and said they support stronger public safety measures to protect both the merchants and shoppers.

“What California retailers and their customers are experiencing is heartbreaking, especially during the busy holiday shopping season. Not only are these organized crimes hurting retailers, [but] they are creating fear and jeopardizing the safety of shoppers and retail workers. CalChamber supports stepped-up efforts by law enforcement to deter and punish these brazen criminals,” the email reads.

Responding to a rash of smash-and-grab robberies throughout the state, Gov. Gavin Newsom said on Nov. 22, reported by KTLA 5 News, the state was providing support to the investigators and offering expertise in stopping these rampant retail thefts.

“I have no empathy, no sympathy for these kinds of criminal gangs and elements, and they need to be held to account,” Newsom said. “They’re not just stealing people’s products and impacting their livelihoods, they’re stealing a sense of place and confidence.”