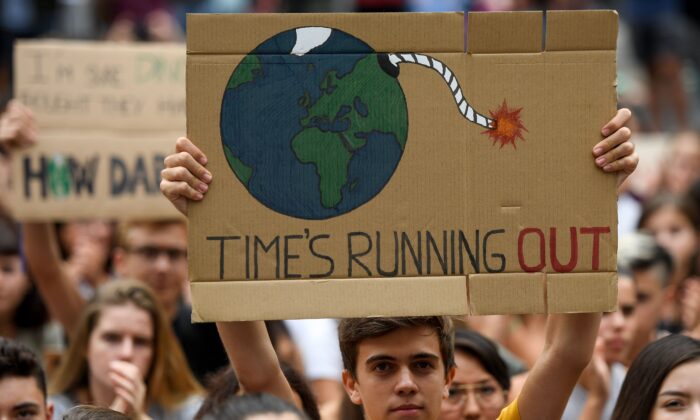 A demonstrator holds a placard reading "time is running out" during a protest in Barcelona on Sept. 27, 2019. (Josep Lago/AFP via Getty Images)
Viewpoints

Climate activists tell us that if we don’t trade fossil fuel sources for “green” energy, the world will come to an end. The science, they say, is settled—even if they can’t settle on a fixed date for the coming climate apocalypse.

However, observation of physical reality shows that the infrastructure needed for so-called clean energy is disastrous for the environment. And the economic numbers give evidence that the transition to the Green New Deal is catastrophic for humans.

So why are U.S. and EU politicians determined to push Western civilization back into the Dark Ages? Because it’s an extortion racket. There’s big money at stake for global elites invested in the climate agenda. And the best way to ensure it reaches their bank accounts is to terrorize the world’s population into believing that unless we agree to the oligarchy’s demands to shrink our means while they expand theirs, Earth will burn to a fiery crisp.

As The Epoch Times reported on Sept. 6, Patrick Moore, one of the founders of Greenpeace, acknowledges that “the ‘environmental’ movement has become more of a political movement than an environmental movement.”

He left the organization in 1986, when he saw it had been “‘hijacked’ by the political left when they realized there was money and power in the environmental movement,” he said.

Indeed, today’s Greens bear little resemblance to the heroes of the early 20th-century conservationist movement that arose in response to the ravages of industrialization. American outdoorsmen such as Aldo Leopold and Theodore Roosevelt reminded their fellow citizens of their duty to conserve the bounty their country provided and to ensure that God’s creation and those created in his image lived in harmony.

Compare those robust naturalists to the neurasthenic fantasists behind today’s climate change movement. They portray mankind as something like a parasitical alien sent to Earth for no other purpose than to violate Mistress Gaia. And in this perverse anti-human scenario, the remedy—renewable energy—degrades man and nature alike.

In the United States alone, wind turbines kill more than a million birds a year. The strip mining required to obtain rare earth minerals for solar panels and electric car batteries cuts paths of devastation through the earth.

The damage that climate initiatives inflict on economies is equally destructive. It’s not Vladimir Putin’s fault that Europe’s backup plan in case of oil and gas shortages was to rely on renewables. Were green energy sources enough to make up for fossil fuels, the Germans wouldn’t now be leveling their forests for firewood with a cold winter ahead.

The prospect of watching constituents freeze to death must have alarmed the United Kingdom’s new Prime Minister Liz Truss. She’s lifting restrictions on gas and oil projects, but there are already complaints that she’s backtracking on the UK’s plan to bring carbon emissions to “net zero” by 2050. In other words, the global elite is angry she’s forestalled the suicide of the country she governs.

And now U.S. politicians are determined to bring the same pain and suffering to the Americans who elected them. California Gov. Gavin Newsom announced at the end of August that by 2035, only electric cars would be sold in America’s largest state. But there’s not enough power to motor the small fraction of electric vehicles already in existence.

Only days after Newsom’s big rollout, California authorities asked electric car drivers not to charge their vehicles, with demand over the long Labor Day weekend threatening to sap the power grid. It was a reality test for Newsom and other U.S. officials who propose to adopt similar initiatives. Naturally, they failed it.

Climate change activists say they’re political progressives, but the movement they steer is among the most reactionary in modern history. So what’s going on?

In the latest episode of EpochTV’s “Over the Target,” my colleague Brendon Fallon and I explain that the climate change narrative is ground zero of political hoaxes. Decades before Russiagate was hatched, the same components that pushed the collusion narrative—political operatives, government bureaucrats, and the media—combined forces to deceive the American public in order to augment their power and transfer middle-class wealth to themselves and their allies.

As Greenpeace founder Moore put it, climate change activists “are primarily focused on creating narratives—stories that are designed to instill fear and guilt into the public so the public will send them money.”

That’s a useful starting point to diagram the structure of the climate change movement. There are four key groupings:

The corporate and political establishment drive the agenda. The former has a big stake in climate infrastructure, with which they expect to get rich, even if renewables can’t generate enough energy to replace fossil fuels. That requires elected officials to cripple free-market competition by subsidizing the renewable industry and regulating fossil fuels out of the market. In exchange for tipping the scales, the corporate side fills the campaign coffers of the political side.

On the next level down are the activists and narrative engineers whom Moore describes. These include climate scientists, journalists, and other so-called experts whose fabrications and threats (“The world will end in 12 years unless we stop eating hamburgers!”) are financially supported by nongovernmental organizations funded and promoted by the elites.

Under them is the crucial cultic core. Climate change activism is fundamentally an end-of-times movement and, thus, it attracts a fanatically committed constituency. These are the highly motivated shock troops. Because their spiritual selves are galvanized by the idea that the world is soon coming to an end, they proselytize on behalf of the expert class and threaten violence against a humanity that they believe is worthy only of damnation.

On the ground floor are people who are simply afraid not to believe in climate change. Even after all the lies they’ve been told the past several years—Trump is a Russian spy, the COVID-19 vaccines are safe and 95 percent effective, and so on—it’s terrifying to believe that the ruling class would lie to them about something as serious as the end of the world. They’re also scared of the End Times and of the cultists.

That leaves us. We’re the majority. But, to date, our vulnerability has been that we’re generally too busy living our lives, doing our work, enjoying our families, and contributing to our communities, and thus have little time left to devote to fighting tyrants, criminals, liars, and lunatics.

But having seen a series of fraudulent narratives weaponized against us, it’s clearer than ever before what climate change truly is—the first in a series of instruments designed by the U.S. ruling class to impoverish us. And now we must fight them, for our future and that of our home, planet Earth, hang in the balance.