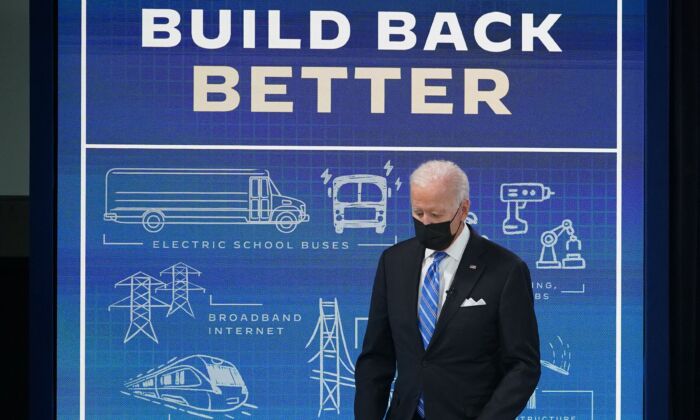 The Greatest Financial Swindle of All Time

One of the most popular provisions of the 1994 Contract with America was a rule requiring Congress to live by the same laws that families and businesses are subject to.

So, why doesn’t Congress live by the financial and accounting standards required of the rest of us?

I’m speaking of the multitrillion-dollar Build Back Better law, a giant financial masquerade. No one knows what it costs. None of the Democrats in Congress who are hellbent on passing it seems to care. That may be because, as the House Budget Committee chairman has pronounced, “We can pay for whatever we want to pay for.”

Uh-huh. Don’t hire this man as your accountant.

The bookkeeping gambits in this bill are so brazen that it’s hard to believe they think they can get away with it.

One of the tricks is to hide the actual cost by counting 10 years of revenue to pay for five years of new spending programs. But, amazingly, even with this sleight of hand, they can’t make the numbers add up. Another is to assume that Congress can pass the most significant increase in U.S. history and it won’t hurt the economy.

The Congressional Budget Office has to score whatever Congress sends its way, so it shows massive deficits in the first five years of the Build Back Broker bill and then, magically, the next five years generate significant surpluses.

Is there any human being on the planet who believes these surpluses will emerge or that these new entitlement programs will disappear? They won’t. Congress is planting seeds in the budget that we know from experience will grow into mighty (expensive) oak trees. We will let the children worry about that in 10 or 20 years.

Yet, President Joe Biden still reads off the teleprompter that the bill “costs nothing” and it “won’t raise the debt by a penny.” I wonder if he even believes that.

It’s closer to a $4 trillion tax, spend, and borrow blitzkrieg with honest accounting, not $2 trillion. Under the process of reconciliation, legislation typically expires after 10 years unless Congress votes to make such provisions permanent, as it did, for example, with then-President George W. Bush’s tax-cut bill. Using reconciliation allows the president and Democratic leaders to mask the actual cost of BBB. As former President Ronald Reagan said: “Government programs, once launched, never disappear. Actually, a government bureau is the nearest thing to eternal life we’ll ever see on this Earth.”

If a CEO of a major corporation or the manager of a small business did accounting the way Congress does, they would get thrown in jail. Bernie Madoff doesn’t hold a candle to the Democrats in Congress. And for full disclosure, Republicans pull from this bag of tricks, too.

The one man who can rescue us is West Virginia’s Democratic Sen. Joe Manchin. He’s been calling out his colleagues for their chicanery.

But will he stick to his guns and force Congress to use generally accepted accounting principles and real numbers? We can only hope. If he doesn’t, he too will be a co-conspirator in one of the greatest financial swindles of all time.