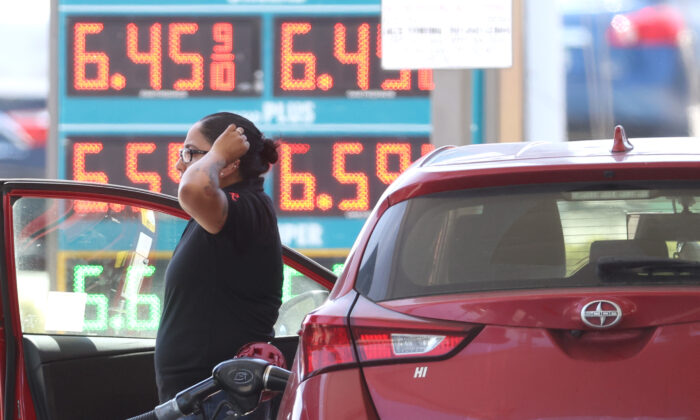 A customer pumps gas into their car at a gas station in Petaluma, Calif., on May 18, 2022. (Justin Sullivan/Getty Images)
Business & Markets

Inflation continues to be the chief concern for U.S. consumers, and most Americans are taking action to manage their balance sheets, a new report from McKinsey found.

According to “The Great Uncertainty” report, 65 percent identify rising prices as their biggest worry, and 66 percent noted that they have taken steps to address growing expenses.

Researchers revealed that 44 percent have either reduced savings or dipped into their rainy-day fund to cover expenses. Nearly one-fifth (18 percent) have either taken on more credit card debt or paid the minimum balance due on their bill. Thirteen percent took on another job or worked more hours to keep up with the cost of living.

The latest economic conditions have forced consumers, particularly low- and middle-income households, to alter their shopping habits. According to a study by Morning Consult (pdf), this is prevalent in the U.S. economy and in markets across the globe.

But how are shoppers changing their buying habits in today’s inflationary landscape?

A Different Trip to the Supermarket

In July, the annual food price index advanced 10.9 percent, according to the Bureau of Labor Statistics (BLS). Food at home prices surged 13.1 percent year over year, while food away from home costs jumped 7.6 percent.

The growing cost of food, whether it is bread (13.7 percent) or chicken (17.6 percent), for example, has changed the way consumers shop at their neighborhood grocery store.

A recent consumer sentiment survey from NCSolutions, an advertising solutions firm, learned that 83 percent of Americans expect their cost of living will increase somewhat or much more in the coming years. Sixty-five percent concurred that their “income has not increased as fast as the cost of food, beverage, and personal care products.”

With more than half (53 percent) of U.S. consumers finding basic food staples more expensive, 46 percent are buying fewer non-essential items at the supermarket. Forty-three percent are only purchasing essential products, the survey discovered. Others have adopted different cost-saving strategies, including buying less-expensive brands, hunting for sales, shopping closer to home, and loading up the pantry or freezer.

“For the second time in a little over two years, consumers are pivoting to new purchasing behaviors at the grocery store,” said Alan Miles, CEO of New York-based NCSolutions, in a statement.

Consumers will know that a recession is on the horizon when they can feel it, says Richard Gardner, the CEO of financing engineering firm Modulus.

“They’re spending more on necessities: food, gasoline, building supplies, automobiles, rent,” Gardner told The Epoch Times. “Those are things that they need for day-to-day sustenance. Prices in all of those areas are significantly higher than they were before the pandemic. While they may not be able to avoid hikes in rent or gasoline, they have the ability to comparison shop in the grocery store and, especially, for discretionary purchases, such as those in the entertainment sector.”

Even high-income shoppers are altering the way they buy groceries.

Walmart, the nation’s largest retailer that markets to budget-conscious consumers, reported that more middle- and high-income customers frequented the retail juggernaut and its e-commerce portal.

“In Walmart’s U.S. business, we have seen mid-to-higher income customers come to Walmart looking for value. As you would expect, food and consumables, in particular, are places where they’re looking to save some money,” Walmart’s CEO Doug McMillon told investors during the company’s second-quarter earnings call.

Until the labor market deteriorates, Gardner believes that more consumers will use brand substitution to help save money.

Easing the Pain at the Pump

U.S. gasoline demand has been weak despite the typically busy summer driving season. According to the Energy Information Administration (EIA), seasonal four-week rolling average consumption is at the same level it was during the period in 2020. In total, gasoline demand stood at 9.064 million barrels per day, down from 9.466 million a year ago.

This suggests that average pump prices are not low enough to entice motorists back to the roads. Since early June, gas prices have declined more than 20 percent from their peak of above $5 per gallon.

A recent American Automobile Association (AAA) survey found that 64 percent of drivers have modified their driving habits in response to higher gas prices. Eighty-eight percent said they are driving less, while half have trimmed their shopping trips and reduced restaurant visits.

Overall, travel plans have been scrapped for a lot of people.

Many travel experts expected consumers to engage in so-called “revenge travel” after two years of staying home. But rampant price inflation forced many travelers to change their plans.

A new Potawatomi Hotel & Casino poll, for example, revealed that nearly one-quarter (24 percent) of people delayed travel plans because of inflation. Further, 15 percent reported canceling their travel plans altogether due to the increasing cost of living. Twenty-three percent noted that they altered their traveling plans by shortening their vacation, changing dates, finding a new destination, or staying in cheaper accommodations.

Existing home sales tumbled 5.9 percent, to a seasonally adjusted annual rate of 4.81 million in July, according to the National Association of Realtors (NAR). This was the sixth straight monthly decline and the lowest since May 2020.

After the NAHB Housing Market Index slipped for an eighth consecutive month to a more than two-year low of 49 in August, industry experts warned that the real estate market slipped into a recession.

“Tighter monetary policy from the Federal Reserve and persistently elevated construction costs have brought on a housing recession. The total volume of single-family starts will post a decline in 2022, the first such decrease since 2011,” said Robert Dietz, the NAHB’s chief economist.

While surveys suggest that consumers are buying less as a way to cope with higher prices, another poll found that shoppers are also hoarding items.

A recent survey from Smarty, a cash-back shopping portal based in Los Angeles, Calif., discovered that 80 percent of respondents had adjusted their shopping purchases and buying behaviors due to inflation. Until inflation normalizes, many are refraining from buying a car (45 percent) and patronizing restaurants (44 percent).

Meanwhile, more than half (52 percent) of consumers admit that they are hoarding certain items because of soaring prices. This includes paper products, laundry detergents, cleaning supplies, and bottled water.

BLS data show that household paper products, for example, have climbed 12.1 percent year over year, while household cleaning items have surged at an annualized pace of 11 percent.

“Inflation is at a record high, and consumers are becoming more aware of how these pricing hikes impact their daily lives,” said Vipin Porwal, CEO and founder of Smarty. “It’s clear that the extreme upswing of costs for items has made consumers take a second look at how and what they’re spending on. We expect more tightening of budgets until prices come back down, perhaps all the way up to the holiday season.”

Last year, U.S. retailers suffered from immense shortages as their inventories were scarce due to strengthening demand. This year, because of soaring inflation rates and recession fears, companies that have stockpiled goods to mitigate the supply chain snafus cannot unload their products.

From Target to Walmart, retailers are noticing that consumer preferences have shifted to basic items, such as food and home essentials. This has become evident in the latest data.

Walmart confirmed that its stockpiles increased by a third in the first quarter compared with the previous year. As a result, it also canceled billions of dollars in orders and cut prices. In the second quarter, the retail titan slashed the number of shipping containers by half to mirror supplies with demand growth. Plus, inventory growth slowed to 25 percent in the last quarter, down from 32 percent in the January-to-March period.

At the same time, John Furner, the head of Walmart’s U.S. operations, informed analysts that “it’s going to take a few more months to work through the backlog.”

Target explained in its latest earnings report that its bottom line took a hit as the company tried to decrease the supply of discretionary goods at a rapid pace. In 2021, the retailer utilized air freight and automated operations to diminish the supply chain crisis. However, market conditions have since evolved, forcing the retailer to reduce the stock of discretionary goods by more than $1 billion and lower orders in the second half of 2022.