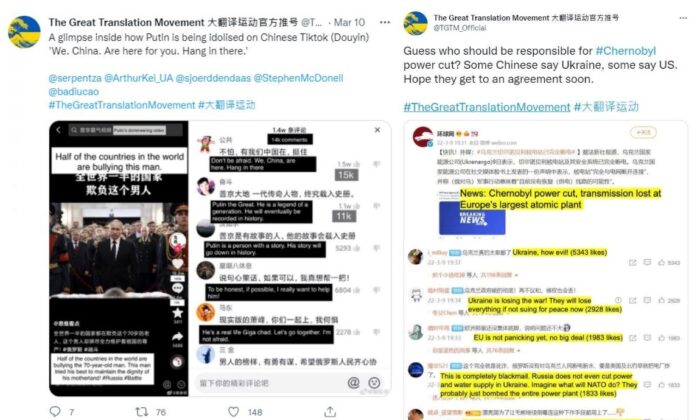 The Great Translation Movement Will Continue Exposing the CCP: Manager

The Great Translation Movement (Movement), a Twitter account that translates the propaganda that’s publicized inside China and makes it available to the outside world, was suspended on July 28. Experts believe this happened because posts from malicious Chinese internet trolls broke the Twitter abuse rules.

The Movement was launched to reveal to Western readers what the Chinese Communist Party (CCP) touts inside China: its iron fist, pro-war, hatred, and anti-American sentiment, which are in marked contrast to the propaganda of peace-loving and being a responsible player it puts forward in the international arena.

Since the Movement’s establishment in early March, it has frequently been the target of the CCP’s censorship machinery.

The incident in July was the second time the Movement account was attacked.

The Movement Must Carry on

One of the account managers told the Chinese language edition of The Epoch Times on the 29th that there are hundreds of volunteers contributing to the translation efforts of the Movement.

He said, “Most of the volunteers are the younger generation in their 20s.”

The mission is to raise international awareness of the CCP’s propaganda and its brainwashing factors. He said, “It’s an anti-CCP movement on a low budget.”

He said that the Movement account has been attacked more than once. On the evening of April 1, the account was “blocked.” The latest incident was a “suspension.”

He insists that the suspension cannot be tolerated.

The Movement was not informed of why it was suspended. But the manager believes it was caused by false account users.

He indicated that the Movement has identified fake accounts that were manipulated by the Chinese police.

He said, “It’s indeed happening. We found that the CCP police got hold of the ID of a legitimate account user—who we have lost contact with—and infiltrated the platform.”

Chinese dissident Lin Shengliang explained his observation of the Movement, “There have been massive online comments from the CCP’s online trolls recently. They are all new account holders.”

The 50 cent army, that is, the CCP-backed online commenters, have been flooding the Movement with many posts about pornography. Lin said, “Their purpose is to divert the focus of the Movement.”

Activities on the Movement came to a head when Japan’s former prime minister Shinzo Abe was assassinated, Lin said.

“There were many comments that were actually pro-CCP and anti-Japan.”

He suspects that the CCP propaganda department has mobilized overseas companies to manipulate public relations through Twitter.

“I myself will continue to expose what the CCP has actually publicized inside China to reveal its true face of a dictatorship,” Lin added.