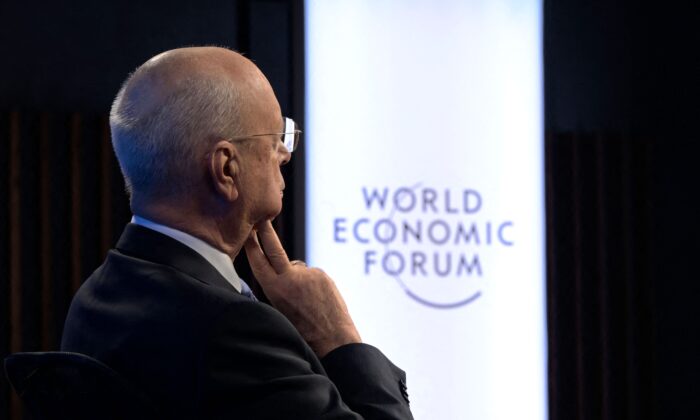 Founder and Executive Chairman of the World Economic Forum (WEF) Klaus Schwab is seen at the opening of the WEF Davos Agenda in Cologny near Geneva on Jan. 17, 2022. (Fabrice Coffrini/AFP via Getty Images)
Viewpoints

The ‘Great Reset’: A Blueprint for Destroying Freedom, Innovation, and Prosperity

How do nations become wealthy? Many are blessed with abundant natural resources. Others conquer foreign lands. Some specialize in unique trade skills and crafts. Timber, mining, fishing, sugar, rum, narcotics, cotton, silk, agriculture, conquest, human slavery, manufacturing, oil, industry, banking, and so on—depending on the century and the region, nations have attained tremendous wealth in myriad ways. Notice that no nation has managed merely to print money and tax its citizens on the path to prosperity. Real wealth cannot simply be conjured from thin air. There must be recognized value in what a nation and its citizens possess.

More than any other source for national wealth, however, one towers above the rest: innovation. The ability of the human mind to create something new and valuable provides society with endless wealth creation. Unlike central bank quantitative easing and other monetary tools (or tricks?), the brain really is a money-printing machine. Whether an innovator alters existing farming, mining, or manufacturing techniques to make production cheaper and more efficient, or an inventor designs something entirely unique, value that did not exist yesterday materializes the next. Innovation is the magic sauce for generating wealth.

If innovation produces wealth, why aren’t all nations wealthy? Because too many nations fail to value innovators or encourage innovation. Without fundamental property rights, strong social institutions, and a dependable legal system, potential inventors have few incentives to build anything new. Humans struggling merely to survive in the world do not waste time, labor, or resources on projects that offer no prospect for future reward. Humans working as servants to the state under centrally controlled economies have no incentive to innovate. Only when private ownership and personal liberty combine can human innovation flourish. Freedom is the secret ingredient to innovation’s magic sauce for increasing wealth.

When economists crunch gross domestic product numbers to see whether a nation’s economy is rising or sinking, a measure of innovation becomes quantifiable. Embedded within that number is something that encapsulates human ingenuity, personal freedom, and property ownership. In this way, economic innovation directly reflects the human condition at any point in time. It provides a measurement of a nation’s freedom.

Now “liberalism” as it is classically understood—as a political philosophy embracing natural rights, limited government, free markets, political and religious freedoms, and freedom of speech, all promoted and protected by an impartial and just rule of law—has always grasped this fundamental truth. Liberty and property rights spawn creativity. Where both are soundly valued, great writers, artists, and inventors produce novelties that would not otherwise exist. It is why medieval Florence birthed at once both modern-day banking and the European Renaissance. The personal freedom to create, build, invest, and own property generates tremendous innovation and national wealth.

Conversely, when today’s central planners argue for socialized control over markets and the substitution of “collective rights” in place of “individual rights” while calling their agenda “progressive liberalism,” they co-opt and subvert liberalism’s historic meaning.

From this recognition that a nation’s freedom directly affects a nation’s wealth arises an even more remarkable truth: any nation that fails to embrace and protect human liberty will be the poorer for it. A country whose institutions do not respect property rights or whose customs do not value freedom will remain a barren desert for human innovation. In this way, nations have a great incentive to liberalize over time. Should they not, they quickly become financially and militarily vulnerable to more innovative and wealthier nations. Observing this simple truth, classical liberals have always understood free markets as the gateway to human emancipation. Economic self-interest, in other words, ultimately leads to expansive human rights and liberties across the planet.

Now with all that as a bit of rudimentary background, how is it that today we have entities such as the World Economic Forum (WEF) pushing for a radical “Great Reset” of Western society that promises to handcuff free markets with economic regulation while concentrating power into the hands of a small international coalition of central economic planners—most notably their own? How could promising a future where people will “own nothing and be happy” possibly be conducive to a free and productive society—or even a happy one? How can a future in which all energy is controlled by international governing bodies and multinational corporations possibly provide individuals with the institutional building blocks for endless innovation? How can farmers sustain larger and more prosperous populations when Western governments continue to stifle agricultural production through regulation and eminent domain?

The questions answer themselves. The WEF’s agenda promotes radically anti-liberal programs such as the use of artificial intelligence to censor dissent, regulate free speech, and even erase ideas from the internet. Its repressive efforts to control all hydrocarbon energy and cattle and crop farm production will smother human innovation by first depriving Westerners of their ability to create, invent, and grow food. Its policies betray millennia of Western civilizational advancement by replacing respect for individual choice and free will with top-down management of human activity through the blunt instruments of force and coercion. Its motivations are indisputably anti-human at their core because each individual human life is treated as nothing more than a cog or input that can be manipulated as part of a centrally-controlled social machine. When Westerners are reduced to ones and zeroes that are sorted and shifted by the WEF’s social programming codes for a “better future,” builders obey but no longer create.

Whereas personal liberty has unleashed the human mind and generated tremendous Western prosperity, the World Economic Forum’s push for a centrally controlled economic system will crush rights, stifle creativity, and mass-produce poverty and servitude. Its proponents, in fact, seem mostly committed to using a combination of pandemic, famine, and fear to centralize dominance for themselves.

In order to persuade Westerners to give up more and make do with less, the WEF and its globalist allies promise Westerners a future Utopia. As with every similar lie ever told to justify the extraordinary acquisition of power, though, they will fail to deliver. No society, after all, was ever promised more than in Stalin’s 1936 Constitution of the USSR—or subsequently treated more abysmally. Despite its claims to the contrary, the WEF’s mission directives intentionally reverse Western trends toward greater human freedom, social mobility, and more broadly obtainable wealth—or what, in another era, would have been rightly regarded as true, liberal progress.

Although the WEF and its sister organizations claim to be “saving the planet,” their efforts seem primarily an ignoble design to control the planet. “Clean” energy, after all, is controlled energy; and the more that energy is controlled by centralized governments, the more completely once-free markets become centrally controlled. If every potential entrepreneur must first receive permission to use electricity before producing anything new, then no entrepreneur can thrive without the central authorities’ blessing. If all manufacturing is viewed as a “threat to the planet,” then no independent upstart can innovate or build wealth without first seeking and obtaining government approval. If consumers are forbidden from buying anything unless it is first pre-approved, then free markets are transformed into controlled markets.

Taking this trend to its logical yet communist conclusion, private property becomes antithetical to the state’s goals. We already see the ominous subversion of private ownership today with so-called ESG (Environmental, Social, Governance) standards used to strong-arm industry goals and manipulate free markets. Because control over information makes control over markets more manageable, the more economic uncertainty that results from market manipulation, the more censorship we’ll continue to see. Recently, even a senior economist who correctly stated that the American economy had entered into a recession found his research “fact checked” and “corrected” by the U.S. government’s friends at Facebook. Where free markets are under attack, free speech is inevitably under attack, too. The individual blessings of liberalism are not easily dissected from the body politic without inevitably rendering liberalism’s death, as a whole.

The issue today may be “climate change” or COVID-19 or “sustainable food supplies,” but the stated issue never seems anything more than a public relations campaign for fooling the masses. It always appears to be merely a disposable excuse designed to seduce Westerners into handing a small cabal of “elites” power and control over everyone else. Convincing mankind to believe that free markets will inevitably lead to some kind of apocalypse increasingly looks like the only policy goal that matters. It may well be the most diabolical trick those with power have ever played against those with no power at all. Fear is used expertly as a torturer’s tool to convince Westerners to forsake willingly their own freedom. The innocent mantra whispered into their ears is simple: Trust us, humanity, we will save you. The implication, however, is far more sinister: For your own good, you must be made to enjoy your new chains.

Notice that for the World Economic Forum to succeed in its mission to control all human activity, it must first destroy the sovereignty of nation states. Why? Because, as noted above, liberal nations that embrace freedom of speech, freedom of thought, and free market entrepreneurship foster innovation and great wealth. Any nation not encumbered by the WEF’s market proscriptions will most likely continue to prosper, while those shackled to the “Great Reset” will most likely languish. This is why Western politicians have worked so hard together to push their “Build Back Better” proposals irrespective of the wishes of any one nation’s voting citizens.

Wealthy free nations are a threat to the WEF’s New World Order. If censorship must be embraced to control the “narrative,” then so be it. If citizens must be denied freedom of movement under the guise of a “health emergency,” no big deal. If private bank accounts must be seized to intimidate protesters, then such threats are the price for ensuring compliance. In this way, the WEF’s plans for a controlled economy intentionally reverse centuries of liberal progress. Political leaders today are dragging the West into the past.

First, individual liberties will continue disappearing. Then, the greatest economic engine of all, innovation, will dry up. Finally, wealth will return solely to the hands of a small “ruling class” minority. This is the future the World Economic Forum hails as “progress.” It is not. It is a recipe for human bondage.