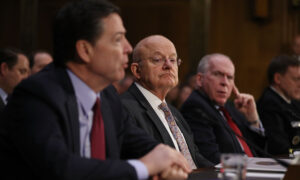 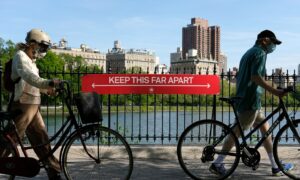 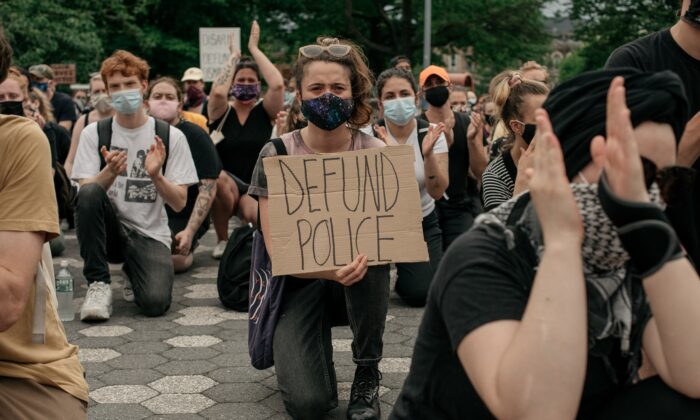 Demonstrators denouncing systemic racism in law enforcement and calling for the defunding of police departments kneel in Maria Hernandez Park in the borough of Brooklyn in New York City on June 5, 2020. (Scott Heins/Getty Images)
Viewpoints

Most of the time we see events—as St. Paul famously wrote in 1 Corinthians, “through a glass, darkly”—but there are times in American history that allow us to experience moments of clarity. The scales fall from our eyes; our blindness is briefly healed, and we can see the nature of our enemy illuminated by the light of truth.

Such a moment—we thought—came with the attacks of Sept. 11, 2001. A country that only a few months before had been squabbling over the results of the contested and prolonged election of 2000 (a battle precipitated by the Democrats’ refusal to accept their narrow loss in Florida and thus in the Electoral College) suddenly came face to face with an existential enemy.

For a time, patriotism united the country as Democrats would hold hands with Republicans and sing “God Bless America.” But the Democrats’ partisan rancor quickly returned, and hasn’t stopped since.

Meanwhile, despite the prolonged U.S. military commitment in the Middle East and Afghanistan, the terror attacks continued and have never really stopped—as the shooting last month at the Naval Air Station, Corpus Christi illustrated. So much for clarity.

Now we have another chance. Over the past few weeks, we’ve seen a series of extraordinary and unfortunate events, beginning with the overreaction to the Chinese Communist Party virus, which involved seriously damaging the economies of the West for what has turned out to be a disease affecting chiefly the elderly, especially those in petri-dish nursing homes.

Stay-at-home orders, blatantly unconstitutional, were issued by state governors in clear defiance of the Bill of Rights, based on the say-so of a couple of doctors no one had ever heard of a few days before. Panic swept the land as “social distancing” (more accurately, “anti-social distancing”) took hold, marked by hysterical hall monitors screaming at passing joggers and innocent beachcombers.

Then came the death of George Floyd, an ex-convict, in police custody in Minneapolis. In short order, rioting broke out as the Black Lives Matter movement opportunistically made common cause with the largely white “Antifa” movement (whose flag is essentially a replica of that flown by the violent German Communists of “Antifaschistische Aktion” in the early 1930s), and then the looting began. “Stay at home” was forgotten. The rioters were given a pass by the Democrats and the media.

President Trump called for federal troops to put down what was clearly an insurrection, using as its fig leaf Floyd’s unlawful death. Many Democrats—and some Republicans—inexplicably sided with the violent protesters and watched their cities burn.

The media, fully on board with anarchy, helpfully called these “largely peaceful” demonstrations—ignoring its former hall-monitor approach to ratting out average Americans who objected to the lockdowns and instead celebrating masses of people in the streets. Public health, they gravely explained, was more endangered by “racism” than the CCP virus.

When the New York Times had the effrontery to run an op-ed by Sen. Tom Cotton (R-Ark.), defending the invocation of the Insurrection Act of 1807 in controlling the riots, the newspaper’s black and minority staffers rebelled. The Times publicly apologized, then relieved the two editors responsible of their duties.

When the Philadelphia Inquirer had the nerve to run a photo of some burning structures with the headline, “Buildings Matter, Too,” the managing editor promptly lost his job. “A headline published in Tuesday’s Inquirer was offensive, inappropriate and we should not have printed it. We deeply regret that we did,” groveled the paper. What was “offensive” about it remains unclear.

For the first time in their history, Americans are getting a taste of what Mao’s Great Cultural Revolution in China was like: it is not enough to ruin a man’s livelihood, you must also make him crawl on his belly like a worm and make him eat the humiliation.

It gets worse. The Democrat leadership, headed by Nancy Pelosi, knelt en masse in “solidarity” with Black Lives Matter, like penitents at a religious revival. Some National Guardsman danced with the protesters. Cops bent their knees as well. A police chief in Webster, Mass., even prostrated himself on the ground before a howling mob.

Meanwhile “bail reform” means that in cities like New York and Chicago, those arrested spun through a revolving door and were right out back on the streets, ready to throw one more brick through a glass window.

Civil disorder and the elimination of authority are par for the course for the neo-Marxist Left, which has been seeking just this day since the student protests and race riots of the 1960s. Barack Obama’s famous promise in 2008 that “we are five days away from fundamentally transforming the United States of America” was heard by well-meaning Americans as a platitudinous synonym for “change” that would address some lingering racial and social issues within an overall patriotic context.

What the radical Left heard, however, was that the United States was a fundamentally illegitimate country, and that change, in the form of revenge, was on its way.

Now it’s here. The Communists and their allies are out and proud. They no longer feel the need to hide who they are, or what they plan to accomplish once the hated Trump is defeated or driven from office this year, or what they have planned for the American people.

Having weaponized a sizable percentage of Millennials against their parents and their country, they now prosecute older individuals for insufficient zealotry on behalf of BLM; the head of Chicago’s famous Second City comedy club, Andrew Alexander, professionally defenestrated himself the other day, resigning for failing “to create an anti-racist environment wherein artists of color might thrive. I am so deeply and inexpressibly sorry.”

The callow but violent youth and those who so gleefully manipulate them now proclaim that “speech is violence” and, simultaneously, that “silence is violence” as well. In their zest to destroy the country as founded—soon enough they’ll get to pulling down the entire Constitution along with all the statues they hate—they are hastening the world George Orwell described in his dystopian novel, “1984.”

“Every record has been destroyed or falsified, every book rewritten, every picture has been repainted, every statue and street building has been renamed, every date has been altered. And the process is continuing day by day and minute by minute. History has stopped. Nothing exists except an endless present in which the Party is always right.”

But this is always the totalitarian way, from the French Revolution to the Bolshevik Revolution to Mao’s Cultural Revolution. The world must be born anew.

Accordingly, we now hear calls to defund and even disband police departments, not just in Minneapolis but all over the country. The lie that police are waging a war on black men has finally stuck, but that hasn’t stopped the BLM forces from defacing the Boston monument honoring the all-black 54th Massachusetts Volunteer Infantry Regiment which fought with distinction in the Civil War, its heroics memorialized in the 1989 film “Glory.”

In sum, the United States has descended into a particular hell of self-loathing in which no idea is too ridiculous, and that the pace of “change”—by which they mean destruction—must ever quicken until (as all Leftist revolutions always do), the show trials begin, Robespierre goes to the guillotine, Trotsky gets an axe in his head, Madame Mao gets arrested, and Ceaușescu gets stood up against a wall and shot.

The Left calls this “reform.” But it’s not. It’s revolution. Just as they tried to do half a century ago, they mean to destroy the country—“by any means necessary,” as their slogan goes. Will we let them?

We’ve been through periods of violent anarchy before. There were the New York City draft riots of 1863, the Civil War itself. Between 1865 and 1901, three Republican presidents were assassinated: by a southern Democrat (Lincoln), a member of the socialist Oneida sex cult (Garfield), and an anarchist (McKinley). And then there was the near-decade of rioting that began with Watts and ended with Kent State.

Back then, however, our institutions still functioned, and there were enough patriotic Americans to regain control. The question is: are there still? To kneel before anyone but God is to show submission.

Time to look closely, and see clearly the faces that mean to finish you.