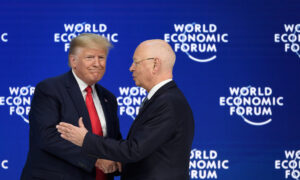 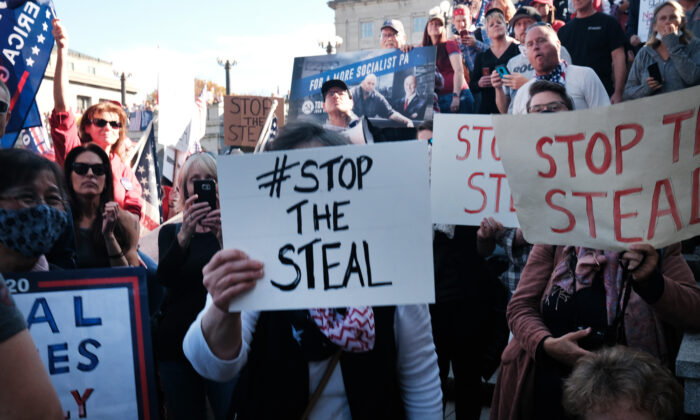 Hundreds of Donald Trump supporters gather in the state capital of Pennsylvania to display their anger at the outcome of the election hours after the state was called for Joe Biden, in Harrisburg, Pa., on Nov. 7, 2020. (Spencer Platt/Getty Images)
Viewpoints

Is the evidence of election fraud really there—and is it enough to change the outcome?

More than a week after the national election that seemingly delivered victory to Democrat Joe Biden over President Donald Trump, accusations of election fraud from the administration and its supporters continue to grow. It’s an evolving story, to say the least.

At the same time, of course, condemnations of Trump’s refusal to concede the election are also piling up, especially among the mainstream news media.

For example, The New York Times’ Nov. 11, 2020, headline (pdf) read, “Election Officials Nationwide Find No Fraud.” And Jonathan Karl of ABC World News Tonight reported that same day regarding the charges of election fraud, “None of this is going anywhere.” There are many more assertions of fraud and denials, of course, but notably, Biden’s win has yet to be certified.

First of all, there’s no doubt that election “irregularities” occurred. The extent of those irregularities is rather impressive. Let’s look at a few.

A basic rule of politics is when you’re losing the game, change the rules. The reality is that the Democratic Party has been changing the rules for decades, and this election year was no different.

For the first time, tens of millions of unrequested mail-in ballots were sent out across the country. Many were sent to people who no longer live at the address, were dead, or never lived there at all. All of this was common in 2020, and ripe for abuse leading to multiple votes from legal voters and multistate voting from the same person.

Then, of course, no requirement for voter ID is another fraud vector that had an impact. By some estimates, lack of ID enforcement has resulted in millions of illegal votes in past elections.

Ah, but there was more rule-changing—much more. Extending Election Day to Election Days means plenty of time for manipulating the ballot count. So, by the way, is stopping a ballot count on election night, which also occurred in swing states such as Pennsylvania.

Then there was Pennsylvania’s judicial activism on changing election rules in the first place regarding late ballots. That’s clearly at odds with Article II of the Constitution, which designates that the state legislatures, not the state courts, decide voting rules. That could be a problem for ballots arriving after polls closed on Nov. 3.

Election interference at the polls and in vote counting software is also alleged. There have been multiple reports of poll workers and postal workers being instructed to backdate ballots to Nov. 3, as well as ballots being, stolen, “lost,” thrown out, or even destroyed. But in key Philadelphia polls, workers were prevented from monitoring activities, with some resorting to binoculars, while other polling stations blocked monitors’ view altogether.

What’s even more interesting is the allegation that software such as Dominion and other vote tabulating tools such as Hammer and Scorecard have been used throughout the country to change votes. One such instance is a “glitch” in a Dominion program, which flipped a county in Michigan from Biden to Trump by around 5,000 votes. But according to some experts, millions of votes being changed from Trump to Biden is a real possibility.

Sworn affidavits have been signed by several hundred people asserting more than 11,000 claims of voter fraud. And yet they’re neither reported on much nor taken seriously.

Perhaps not surprisingly, the vast media machine across network and cable television, and print and digital channels, which overwhelmingly leans left, has skewed messaging every chance it gets. A Biden-friendly, anti-Trump narrative is the mission; truth is not a consideration.

How else to explain the nationwide censorship of Hunter Biden’s laptop?

Per the New York Post and former business associates, Joe Biden is allegedly explicitly involved with his son’s deals with the Chinese Communist Party (CCP)-owned businesses, involving millions of dollars of payoffs to the Bidens. There are also emails allegedly showing Hunter selling access to his father, Joe Biden, who was vice president at the time, as well as videos of Hunter allegedly engaging in illicit activities.

But the facts were largely ignored by Big Media. Can you imagine the coverage if the laptop had involved Donald Trump Jr. and the president?

Other examples of overt election influencing are easy to find. Pulitzer Prize-winning historian Jon Meacham was fired by MSNBC as a political analyst for not disclosing his work with the Biden campaign. Danny O’Brien, executive vice president at Fox Corp., was formerly Joe Biden’s chief of staff. It’s no coincidence that Fox News called Arizona for Biden just 15 minutes after polls closed. Fox’s analyst Arnon Mishkin, a registered Democrat, gave the Biden campaign a needed boost with the Arizona call. At this writing, Arizona’s electoral votes remain un-tallied for either candidate.

This kind of voter influencing and outright partisanship portraying itself as news is now the rule rather than the exception. What’s more, Big Media has taken the reins in deciding the election for Biden, rather than waiting for it to be certified by the states and the Electoral College.

The narrative didn’t include legal and constitutional perspectives, but skewing polls heavily in Biden’s favor certainly did, and does. The sole purpose of grossly overstating polling data, showing Biden with a double-digit lead, was to suppress the votes of Trump supporters. Like calling states for Biden before he won them, the idea of poll number inflation was to create the impression of a “blue wave” of massive support for Biden to discourage voter participation.

Big Tech—Google, Twitter, Facebook, YouTube, and others—put its thumb on the election scale in a big way. It not only suppressed negative information against Biden, such as the aforementioned laptop discoveries, but also censored conservative articles, announcements, and commentators. Even President Trump was censored by Big Tech.

What’s more, search engine Google scrubbed negative news items about Biden—many just simply couldn’t be found in the run up to the election. The idea of a handful of people controlling the information of the most powerful nation on Earth should bother every American—but apparently, it doesn’t.

Finally, at least for this article, is the simple reality that there was no “blue wave” to explain Biden’s supposed victory. Rather, the opposite occurred. Trump received a record number of votes for any presidential candidate and up to 9 million more than he got in 2016.

Related to that phenomenon is the fact that there has been no correlation between Biden’s win and the massive down-ticket losses of Democratic candidates. A Biden win should have produced massive victories in the House of Representatives and the U.S. Senate. But it didn’t. Democrats lost seats in the House and have failed to capture a majority in the Senate.

It’s as if hundreds of thousands—perhaps even millions—of ballots were filled out only for the Biden/Harris ticket, with no other votes for any candidate of any political party, across the country.